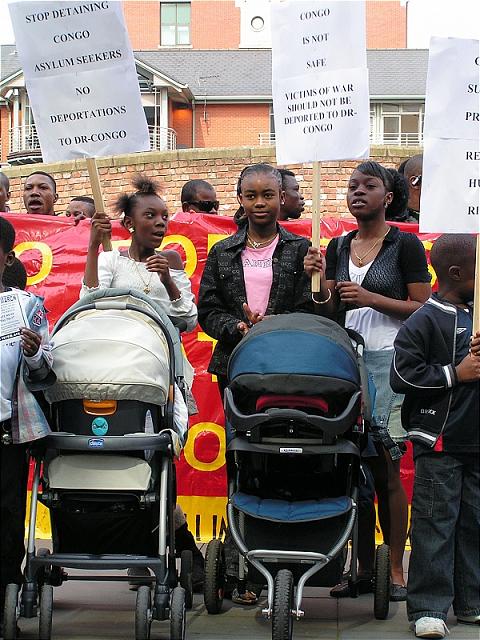 photo from Nottingham demo earlier in the year

Action will be taking place in many British cities because a number of Congolese detainees have now received "removal directions" for Thursday 30th August, stipulating Flight number PVT616 and 'Operation Castor'. Castor was the 'Operational' name given to the 'Charter Flight' on the 26th February that removed 21 children and 17 adults to DR Congo.

2) What is the Home Office motive for trying to remove so many to the DR Congo now? What you can do about it?

Other actions against the 30th August 'charter flight' in Manchester, Newcastle, Glasgow and Cardiff:

Assorted postings of asylum related issues, here in Nottingham .... and beyond

Assorted postings of asylum related issues, here in Nottingham .... and beyond

2007 Nottingham Demo against deportations to Congo

Also, while at the Climate Camp ...... folks thought that they'd go and interfer with the operations of XL operating charter flights scheduled to 'remove' a number of failed asylum seekers to DR Congo.

quoting from a comment: [18.08.2007 19:24] Next deportation flight
Congolese refugees are receiving deportation orders for the 30th August. All indications are that XL will again be the company flying them back. Please telephone, fax or email the company. Please be non-aggressive and non-offensive otherwise it could be detrimental to trying to stop people getting sent back.
Tel: 0870 320 7777
Fax: +44 (o)1883 627 564
Email: go to the website, www.XL.com, go to contact us, go to media enquiry. Happy emailing.
XL action climatecamper