Nottingham gets its skates on to reduce global warming

In a clear demonstration of Nottingham’s pre-eminence in environmental technology the City Council, in partnership with E-on, has developed a practical means of countering local warming due to climate chaos. This clearly contradicts all those who doubt whether technical solutions can be brought on stream in time to prevent global temperatures reaching the tipping point. 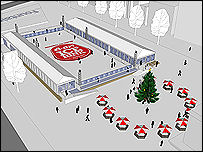 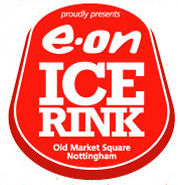 The £350,000 trial project will see one third of the new market square covered with ice this winter. It is hoped that the cooling effect of this will significantly reduce the local temperatures and return them nearer to those prior to the onset of CO2 induced local warming. The Council’s environmental team will monitor the effects of this trial with the intention of extending the technique to cover more areas of underused public space with ice in the near future. Initial approaches have been made to potential sponsors to raise the additional investment needed for a larger scheme. Shell, BP, East Midlands Airport and Richard Branson are amongst those said to be interested in the project, which is being managed by Experion.

Emelia Lowless, spokesperson for E-on said, ‘This is a very exciting project for us and we are pleased to offer local people something to offset the CO2 emitted by our Ratcliffe-on-Soar power station, one of the biggest coal-fired power stations in Europe.


Neither Council leader John Collins nor Chief Executive Michael Frater were able to speak to our reporter, or to each other, but their mediator did state that either or both would be pleased to take credit depending on the results of the trial.


In another environmental story this week, Coca-Cola claims to have developed a CO2 sequestration plant, which will capture atmospheric CO2 and store it in cans of their soft drinks. They are currently working on the next stage, which is to encourage people not to open the cans in order to prevent the CO2 from being released back into the atmosphere. Apparently there are many groups worldwide who are currently helping with this second phase.


jeezuz... how much energy will be used to make that smelly ice rink, then?