Stop the Nazi BNP in Nottinghamshire!

The BNP have announced that on Tuesday 16th their leader Nick Griffin will be speaking at a rally in Kimberley. Join us in our protest at 6:30pm, Tuesday, October 16th at Sainsbury's Car Park, Greens Lane, Kimberley
People from Nottingham meet at Phoenix Park tram stop,5.30pm 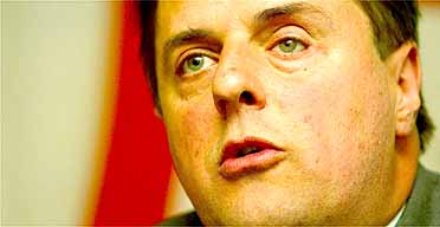 Nick Griffin, the leader of the BNP was convicted for race hate and as a Holocaust denier. He was a long time member of the explicitly Nazi National Front who denied Hitler's campaign to exterminate Jews.

Nazis and other fascists have for years targeted the Kimberley and Eastwood area.

Especially now, they think their chance is here: when there is a lot of dissatisfaction with the major political parties. They pretend that they are no longer Nazis. But nothing has changed.

Let them know they are not welcome in Kimberley or Eastwood.

Join our protest against them seeking to stir up their race hate politics here.

Defend jobs, defend our communities, our health service, our housing and the education rights of our kids. Yes!

But also defend them from the race hate of the BNP that only leads to violence and division.

Bring cars if you can.
for Nottingham people Phoenix Park is just past Cinderhill roundabout on the A610