About 40 protesters held a banner protest outside the Biodiesel Expo in Newark, Europe's largest biofuel conference this year. Participants of the conference include BP, Virgin and D1 Oils, a biofuel company headed by former Shell CEO Lord Oxburgh which is acquiring rights over large areas of land in India and southern Africa. Protesters highlighted the devastating impact which the industry is having on global warming, rainforests, local communities in the global South and food security. 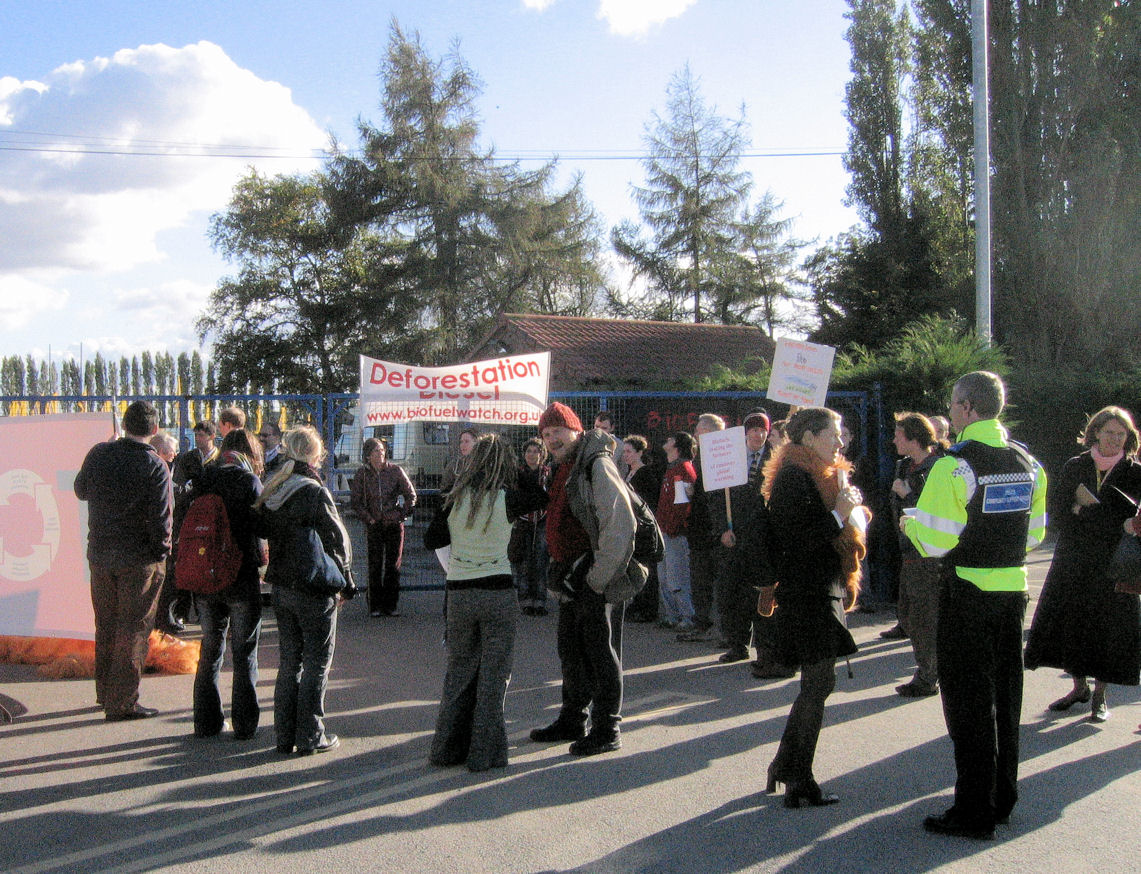 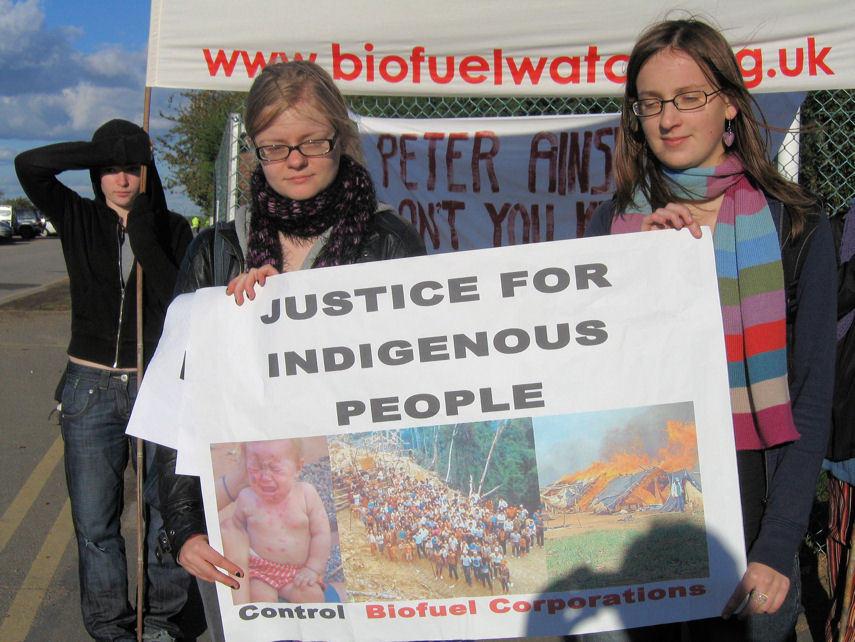 Below is the press release Biofuelwatch sent out after the banner protest.

The Biofuelwatch event was separate from the direct action protest inside the Conference reported here:

Newark : 40 Protestors call for food for people, not cars

Over 40 environmentalists protested outside the ‘Biodiesel Expo’ today, Wednesday 17th October, at Newark Showground. The protest was to raise awareness of the damage that massive and rapid biofuels development is having on the climate, people, food security and forests.

The protest comes just the day after World Food Day October 16th when the UN Food and Agroculture organization (FAO) highlighted the impacts of biofuels of food security around the world.

The United Nations Special Rapporteur on the Right to Food, Jean Ziegler, is so concerned that he has warned that rapid biofuel development is a total disaster for those who are starving. He will call for an international five-year ban on producing biofuels to combat soaring food prices in the UN General Assembly on October 25th. (see below).

Deepak Rughani from biofuelwatch says “The UN FAO is very concerned about biofuels. They have said that they ‘are gravely concerned that biofuels will bring hunger in their wake’. A battle is being created between food and fuel that will leave the poor and hungry in developing countries at the mercy of rapidly rising prices for food, land and water. The EU and the UK urgently need a moratorium of biofuels to make sure that we don’t push millions into starvation. We have protested today to support the call in the UN and demand the UK government stops the mad rush to biofuels”.

biofuelwatch, who are campaigning for EU moratorium on large-scale biofuel production and imports into the EU, say that from April 2008 UK consumers will have no choice about having to buy biofuels at the pump. The biofuels available will be blended from many difference sources across the globe depending on commodity market prices.

From April, consumers will not be able to avoid buying biofuel that may be accelerating destruction of tropical forests, increasing their carbon emissions, causing human rights abuses, and taking land from vital food production.

The United Nations Special Rapporteur on the Right to Food is to demand an international five-year ban on producing biofuels to combat soaring food prices at the United Nations General Assembly on 25th October.

http://tinyurl.com/2ltgwd
The entire text of a report to the UN General Assembly from United Nations Special Rapporteur on the Right to Food, Jean Zeigler, highlighting the risks to millions from biofuels is attached to this Press release.
Links to World Food Day press from around the world
Jamaica - Food prices set to rise – Tufton:


i wasn't there this time but reading the article on this topic has reminded me how incredibly important it is. i shall get involved in the near future!

thankyou to everyone who was there and who is campaigning on this issue.