Demonstrations have been held this week in Carrington to save the local post office from closure. In the last fortnight, the Save Carrington Post Office Action Group has emerged and has been campaigning to keep the Carrington Post Office [CPO] open. They have urged people in the CPO's catchment area to write letters to the Post Office and Post Watch, asking for the CPO to be considered for further review after the public consultation. The action group has also delivered over 4,000 leaflets and its petition has collected 2000 signatures in just two weeks. In addition to carrying out its own branch assessment report, the group held a couple of demonstrations this week.

Futhermore, a wheelchair-using customer of the Post Office, attempted to travel to the two alternative post offices as suggested by the Post Office to see how accessible they really are. Doreen Sim, who has used CPO twice a week for the last twenty years to pay her bills and collect her pension, says the current journey takes her just 5 minutes from her home along all level terrain and wide pavements... 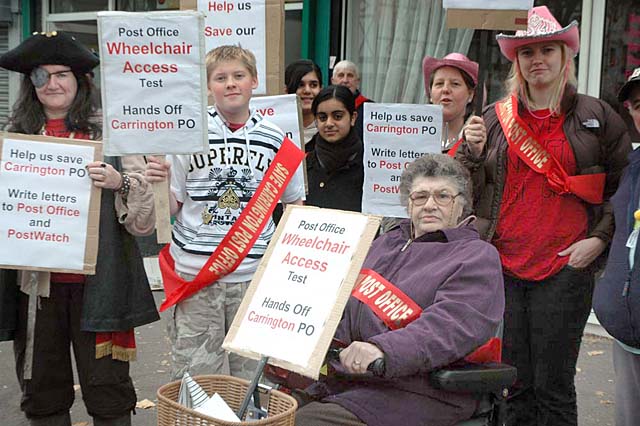 The two alternative post offices; Sherwood and Beech Avenue are both almost 30 minutes away and both have accessibility issues which include steep inclines/declines, narrow pavements blocked by litter bins, no bus routes between Carrington and Beech Avenue and there is a step at the entrance of the Sherwood branch.

The Post Office restructure is all about creating a sustainable branch network. However, the branch access reports do not take into account the commercial viability or the social impact of individual branches.

The Save Carrington Post Office Action Group has weekly meetings, has carried out its own branch assessment report, created banners and written letters.

The key arguments to keep CPO open are:

March to MPs Office with Petition


At 2pm on Friday 9 November customers of Carrington Post Office will march from outside the Post Office on Mansfield Road to John Heppell, MPs office in Trinity Square to deliver 3,500 signatures which will be presented to the House of Commons.

The march will form the culmination of a campaign to save Carrington Post Office which has involved three Residents' Associations working together and residents from Carrington, Sherwood, Sherwood Rise, Mapperley Park and the Arboretum campaigning together for the first time ever.

In just four weeks, the residents have delivered 5,000 leaflets, held three demonstrations, a wheelchair accessibility test, conducted our own branch access reports, written the most amount of letters that John Heppell, MP has ever received on a single issue, generated media coverage and collected 3,500 signatures.

Councillors from Sherwood, Berridge and Mapperley have all been invited to attend.

Commercially Successful Post Office Due to Close Despite Strong Opposition


Though Carrington Post Office is one of the top 25 best-performing, commercially successful post offices in the region, Post Office Ltd is currently persisting in its surprising decision to target this office for closure.

In doing so, it appears to have entirely ignored strong representations from Nottingham City Council, the local Member of Parliament and three thousand customers. It also appears to have ignored the Government's minimum access criteria, which was laid down to protect the public when the Government set the current process in motion.

Will the minister, Pat McFadden, now intervene to support the Government’s criteria or is it without value?
- ends -

The Save Carrington Action Group, which staged a high profile campaign during the public consultation, is now seeking legal advice.
The Campaign’s Main Arguments to Keep Carrington Post Office Open:
· Carrington is one of the top 25 best performing, commercially successful branches in the region – an independent count revealed an average of 250 customers each day during the quieter half term period, and over 60% of its business is profitable mail
· The proposed alternatives are not accessible by wheelchair users – the journey to Beech Avenue is only possible if the wheelchair travels in the middle of the road, while the journey to the Sherwood branch is long and hazardous and there is no disabled access once there.
· One of the further proposed alternatives, Woodland Grove, is also being closed, so we are short of alternatives in the area.
· The many business customers that currently use Carrington will not be able to use Beech Avenue as it has limited opening hours and closes over lunch while the long queues at Sherwood will result in long delays to users.

Commercially Successful Post Office Due to Close Despite Strong Opposition Contd.
Page 2 of 2


· Sherwood already has long queues running down the high street causing obstructions and a nuisance to retailers and shoppers – should CPO close the queues and the elderly and those with small children would be made to wait for longer, sometimes in adverse weather conditions no shelter.
· Serves a large catchment area which currently covers over 2,200 residential properties in the following areas: Carrington, Mapperley Park and parts of Sherwood, Woodborough Road, Sherwood Rise and the Arboretum.
· CPO is located in a parade of 14 small shops including a pharmacist, a florist and a newsagent. These form the lifeblood of the Carrington community but are likely to be adversely affected should passing trade from CPO diminish as customers instead use the Sherwood shops.
· CPO has a free-to-use ATM which is one of only two in a large area.


The Save Carrington Action Group Campaign Achievements:
· Facilitated the largest mail bag of post ever received on a single issue by John Heppell, MP
· Held three demos outside Carrington Post Office which attracted a total of over 100 people and our local MP and some councillors
· Collected 3,000 signatures in a petition
· Designed and delivered 5,000 leaflets via street handouts, letterbox drops and demos
· Created and positioned five banners and various posters
· Had inter-residents associations support between Carrington, Sherwood Rise and Mapperley Park for the first time ever
· Generated three news articles and one feature in Nottingham Evening Post, three news slots on Trent Radio, two news slots on East Midlands Today and one news slot on BBC Radio Nottingham


Strong opposition, but it looks bad