Recently back from a tour of the US where he met with Barack Obama, Al Sharpton and Jesse Jackson, Anthony Thomas is the new face of explosive black political activism. 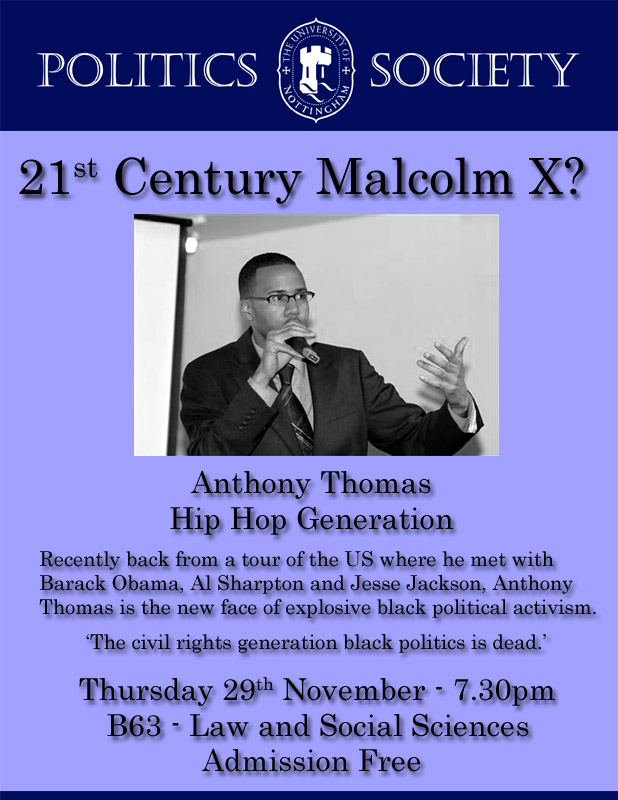 Who are the people who start the changes that shape popular opinion and make big changes to the stale political system?

In our first guest lecture of the year, the Politics Society proudly presents Anthony Thomas, the founder of Hip Hop Generation UK - an organisation that aims to provide a platform for a new black political leadership. Recently back from a tour of the USA where he met with BARACK OBAMA, JESSE JACKSON and AL SHARPTON, Anthony Thomas is one of the sharpest and most dynamic speakers to come out of the UK in recent years.
His explosive stage presence has seen him interviewed on Channel 4 News, Sky News and the BBC.

If you’re interested in hip hop, how political power can be reclaimed by the people, the politics of racism or seeing one of the UK’s most entertaining speakers then this event is unmissable!

Admission is FREE and absolutely everyone is welcome – whether you know anything about politics! No university card is needed to gain entry .

FREE DRINKS will be provided and there will be a chance to speak to Anthony after the event in a more relaxed atmosphere.

would malcom X have metn up with a Democrat Party candidate?

Is this dude a muslim?

This guy with an "explosive stage presence" and running off the names of people like Obama or Jackson ... what is he, a pop star? A motivational speaker?

What are his policies - what does he have to say for himself that would make him the new Malcolm? You defame a righteous brother and powerful critic.

Malcolm X was a unique person,no one can be compared to him or try to imitate him as the 'new Malcolm X'.

Who is Anthony Thomas? Perhaps this will help...Independent Article

Young, gifted and black: Politics choices
By Simon Woolley
Published: 04 November 2007
In the past, political parties would lament that there wasn't a vast pool of black talent. Now the pool is overflowing, from grass-roots activism to the mainstream parties. But there's still a way to go. Both activist and party bosses are in danger of believing we've done enough. They haven't, we haven't

Simon Woolley is a founder and director of Operation Black Vote

Born in London to Ghanaian parents, MacAttram started out as a freelance journalist before joining racial-equality organisation The 1990 Trust in 2003 as its lead on health issues. In 2006, she founded Black Mental Health UK, an organisation raising awareness of inequality in treatment and care of people from black communities.

MacAttram says: "Afro-Caribbeans make up less than three per cent of the population, but 40 per cent of those detained in high-security mental hospitals. When I was at The 1990 Trust in 2004, I covered the Bennett Inquiry report for its community newswire, which looked into the treatment of an Afro-Caribbean man who died in a mental hospital. It was a rude awakening about the experience of many Afro-Caribbean patients, who were being routinely subjected to human rights abuses, because they were stereotyped as 'big, black and dangerous'. If they were so dangerous, why did they keep ending up dead?

"The 2007 Mental Health Act has made things worse. Now people can be forcibly medicated in their own homes. It's a concern for everyone in this country, and the black community especially. But the Act has been roundly condemned, and I believe enough people are sickened by these abuses that the system will have to change."

Having been narrowly beaten twice in battles for parliamentary seats, this trade unionist and community activist picked herself up to win hands-down her fight to represent Brent South for Labour in 2005. She was soon promoted to Parliamentary Private Secretary to the Health Minister Jane Kennedy, and in October 2006 was appointed Chair of the All Party Parliamentary Group on Youth Affairs. Butler is also an honorary president for the British Youth Council.

Woolley says: "Dawn is one of the hardest-working MPs. She enjoys nothing more than inspiring others. She's quietly ambitious, but not at a price that removes her from the community."

Thomas is the head of Hip Hop Generation, a social movement that aims to embrace the spirit of hip-hop as a tool to politicise young men and women through campaigning on issues such as gun crime and gang culture.

Woolley says: "It won't be long before this firebrand makes the transition to politician. And music moguls beware: Thomas is tired of you exploiting black artists to fill your coffers."

As soon as he took his first ministerial job, Lammy (right) was tipped to become our first black prime minister. Now the Minister for Skills, he is a lawyer by profession. He replaced his mentor, the late Bernie Grant, as MP for Tottenham in 2000.

Woolley says: "Lammy is now confident about using his position to address inequality at the highest level. He'll give the Miliband brothers a run for their money in any race for number 10'.

A former civil servant at the Foreign & Commonwealth Office, Carrington is a magistrate and sits on the Apex Trust, a body dedicated to addressing the needs of former offenders. She believes staunchly in taking responsibility for change, particularly in crime, education, and employment.

Woolley says: "Not one to bask in her glory, she now spends much of her time encouraging others to become magistrates and change the criminal justice system from within."

Umunna is editor of the online political magazine TMP, and a prominent member of the Labour Party. He has written for the Financial Times, Tribune and The Voice. He is also legal adviser to the progressive pressure group Compass .

Woolley says: "This guy is ready for elected office – he'll inspire a young black generation to get involved in politics. He may end up as the UK's Barack Obama."

Bailey founded My Generation a year ago to develop communities by addressing issues such as employment opportunities. Bailey will be fighting the Labour-held seat of Hammersmith and Fulham in the next general election for the Conservatives.

Woolley says: "Bright as a button and positively oozing confidence, Bailey's challenge will be to not believe all the hype that surrounds him."

Since Sydial set up FFBJ in 2004, it has become an effective link between British Jamaicans and the rest of the UK. Sydial believes that politicised Jamaicans will help with social problems in the UK.

Woolley says: "Sydial wants to be the first Jamaican-born British Conservative MP, and he's a real find for the party."

A senior programme and risk manager for the London Olympic project, Wilmot is a committed Liberal Democrat. She also devotes herself to civic-action causes: she's a trustee both of the Tricycle Theatre and the Eastside Young Leaders' Academy, whose goal is to develop the leadership potential of young African and Caribbean men.

Woolley says: "Wilmot is just what the Lib Dems have been looking for to reconnect with Britain's black communities."

Since 2001, Montgomery has been director-general of places and communities in the Department of Communities and Local Government – a role that requires him to handle a budget of more than £100m.

Woolley says: "On the surface he is the archetypal civil servant: quiet, discreet, and shunning publicity. But beneath that veneer, he has a clear vision of how social equality can be delivered."

Research and interview by Hugh Montgomery

Thomas is the head of Hip Hop Generation, a social movement that aims to embrace the spirit of hip-hop as a tool to politicise young men and women through campaigning on issues such as gun crime and gang culture.

Woolley says: "It won't be long before this firebrand makes the transition to politician. And music moguls beware: Thomas is tired of you exploiting black artists to fill your coffers.""

Still doesn't make him a Malcolm X though.

She has some interesting things to say about Jesse Jackson: