Starbucks Not Welcome At University

Nottingham university students have been campaigning tirelessly over the last few weeks to get their University to get Starbucks off campus, and stop them selling their unethical beverages in the Hallward Library. Students were shocked when, a few weeks ago, their café in the main library on campus suddenly started serving Starbucks coffee. In a move that has upset a large part of the student body the university decided to change coffee supplier without any sort of student consultation and now the students are up in arms.

For the last two weeks students have manned an ‘anti-Starbucks’ stall outside the Hallward Library where the Starbucks coffee is being served (at nearly double its pre-Starbucks price). The movement against the corporatisation of our educational facilities has been swift; nearly 700 people have joined the Facebook group against Starbucks, hundreds of people have signed the petition and loads of cups of tea and coffee have been sold from a makehift stall outside the library to students who don’t want to pay £1.45 for a coffee. 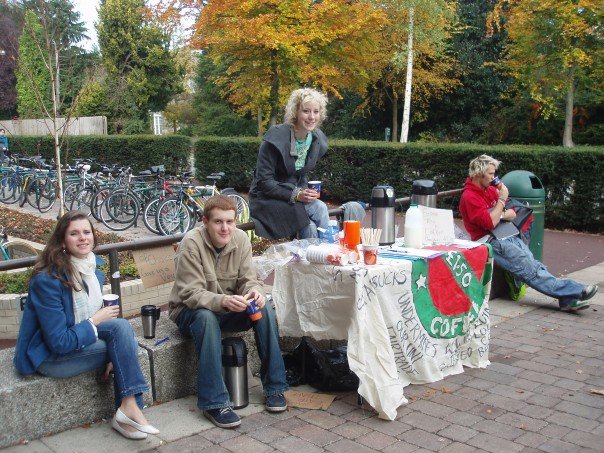 From 'Why does Starbucks upset us so much?'

Firstly (and possibly most significantly) the opening of the Starbucks has upset so many because of the lack of consultation and the huge increase in price overnight. Students want cheap, good quality coffee and they want to have a say.

Starbucks have an appalling list of environmental and social offences that they have committed over the years: Only 6% of Starbucks’ coffee is fairtrade (Coffee growers receive little more than 0.50p for a pound of coffee, which is then sold for £80). Starbucks have a terrible workers rights record and has been recorded as sacking workers for unionising and not allowing their American barrista’s full healthcare or holiday benefits.

Finally Starbucks is an ugly, aggressive and irresponsible corporation. They bring a soulless and bland brand to every place on earth that they think they will make money, they break local business and shatter community meeting places and can only be stopped by communities (like our student one) standing up to they and telling them to ‘buck off’.

The students of Nottingham University do not want a company on their campus who have no scruples with opening up in Guantanamo Bay!

A meeting with the head of Estates at the University has confirmed that we are in a trial period and with another planned outlet on the Jubilee campus the time has come for us to make our voices heard and make sure Starbucks fail their trial.

Students plan to remain outside the library daily for as long as it takes.

From 'Keep Starbucks off campus!'

At present, the Hallward library café is now serving Starbucks coffee. The beans and the coffee machine are bought from Starbucks, making the café "soft-branded". The Students' Union was informed of the proposed moves on the 5th of October, apparently after the deal had already been set in motion. Although this is apparently a trial period, no dates are available and no method of feedback has been given to the student population. We believe that Starbucks are the wrong people to be given this contract, and we ask for this decision to be reviewed.

STUDENT CONSULTATION
This move directly affects students, yet there was no consultation with the Students' Union prior to this decision being made. Given the controversy that has surrounded Starbucks' purchasing, working and marketing practices, this is disappointing. As yet there have been no means provided to students to feed back their opinion on the matter, as there are no feedback forms in Hallward cafe.

STARBUCKS’ SATURATION STRATEGY AND THE DEATH OF INDEPENDENTS
Starbucks aim to open 40,000 outlets worldwide, and have used an aggressive marketing strategy to attain their success. Starbucks seek to completely saturate target areas with their outlets, aiming for a situation like that in Vancouver, Canada, where one cross-roads has 3 Starbucks facing each other. By opening premises in prime locations at a loss even to other Starbucks, many smaller, independent coffee shops have died out. Not only does this reduce diversity and choice, but it means local communities lose money from the local economy to the coffers of a huge multinational.

TRADE UNION AND WORKERS ISSUES
The Starbucks Workers Union (SWU) alleges that the coffee giant has unlawfully fired two Industrial Workers of the World (IWW) ‘baristas’ in retaliation for union activity; illegally disciplined workers for discussing the union during and after work; threatened, issued negative performance reviews, and suspended workers for supporting the union. According to trade unions, workers in Starbucks can have to work at a relentless pace, and with the rationalised conditions, have suffered from repetitive strain injuries. Interestingly most baristas are on ‘temporary contracts’, even if they work full time hours. These ‘temporary contracts’ mean the company is not obliged to offer benefits, guaranteed hours and therefore workers have no guaranteed income and cannot plan their lives round guaranteed working times.

FAIR TRADE....?
Despite Starbucks having an ethical policy, they themselves state that only 6% of their global products are certified Fairtrade. Coffee growers receive little more than 0.50p for a pound of coffee, which is then sold for £80. Of the $7.8 billion annual global turnover they achieve, 0.4% is spent on all charitable contributions, and only 0.02% on social development projects in coffee-growing communities. Considering their profit, this seems like a token offering. (This information can be found in the Starbucks "Social Responsibility" pamphlet, if you look hard enough). The University has had Fairtrade status for several years, and have aimed explicitly to ensure all hot beverages served are certified Fairtrade. Serving Starbucks coffee is a step backwards.

No one forces anyone to buy a coffee!

I was just checking out the price of starbucks coffee around the world when I came across your site. I can't believe you're complaining about a company selling coffee on your campus. If you don't like the price - simply don't buy the product. If other people like the price they will buy. Don't' force your ethics on other people - let them decide for themselves. That's called democracy. And of course, for goodness sake, get a grip. There are far more important things in the world to worry about than the price of coffee on your campus!

I have been looking for a site to give me the lowdown on Starbucks because they are trying to use a property that belongs to my family. Little hope of stopping it, I'm afraid, but I'll have a go. Various other sites were long on hate but short on information, whereas yours tells me everything I needed to know. Thank you. And hope you manage to get rid of them - all power to you.

I was just wondering how do you want to get cheap coffee which is fair trade as well. I think buying fair trade product is very good, but you have to pay the price.

My advise is "drink water".

The defenders of choice

I was stumbling on Mozilla today and randomly ended up on this page, as it happens I'm the leader for the the pro-Starbucks group at Nottingham University, (I've put the web address down in the contact details).
Personally I'm not hugely bothered about the ethical standings of Starbucks, whether it's Fairtrade or not, my concern is that the minority are going to enforce its will on the rest. There are plenty of other coffee alternatives on Nottingham University campus, including a coffee machine right next to the Starbucks. If people don't want Starbucks, then no-one is stopping them from going somewhere else, there are many people on campus however that do enjoy it and do wish to drink it.
The people who support the fair-trade movement are also, more often than not, the ones calling for freedom of choice, speech and everything in between and yet on this issue it seems to be that it's their way and their way alone. If they want their fairtrade coffee, then their most welcome to obtain it elsewhere on campus from any of the tens of cafes. They can make their moral choice, but what they don't need to be doing is making it for everyone else.