The eleven climate change activists who shut down Ratcliffe-on-Soar power station on April 10th 2007 are on trial FROM Monday 14th Jan AT NOTTINGHAM BRIDEWELL MAGISTRATES COURT. 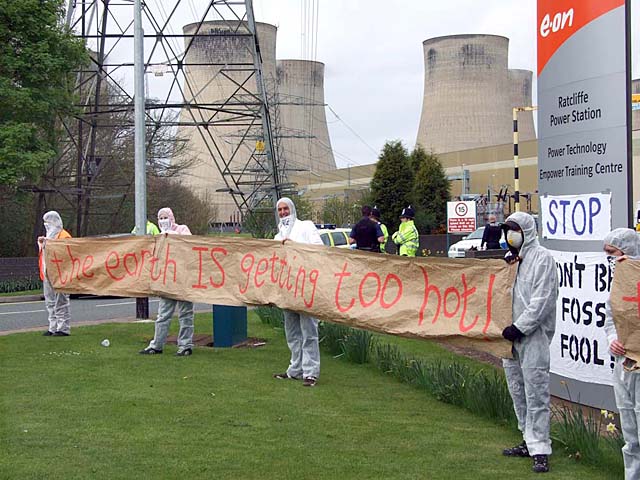 Photo outside the demonstration

They have pleaded not guilty to charges of aggravated trespass and ARGUING that it was necessary to take such action in order to prevent the imminent threat that climate change poses to the human population. They are arguing that the threat of climate change on human life is so imminent & serious that it is a proportionate and reasonable response to commit aggravated trespass to try to reduce carbon emissions from England's 2nd largest CO2 emmiter, Ratcliffe on Soar power station.

On April 10th 11 activists walked into Ratcliffe on Soar Power Station and locked onto coal machinery & conveyor belts in order to prevent the power plant from working. They prevented the plant from re-charging after the Easter break for 5 hours. They were cut free by police and arrested for aggravated trespass.

This is the first time that the defence of necessity in relation to climate change has been used in a court of law. The defendants will call an expert witness; a climate scientist, and Royal Society Research Fellow, to prove to the court the scale and imminence of the threat that climate change poses.

The Trial is expected to last 3 days.

There will be a supporters demonstration 9:30am on Monday 14th January, please come along and give your support to the fight against climate change.

Also please download and distribute the posters attached to this article.

When are populace of this country going to realize that there are more of us than them. That public opinions cannot be stifled in a democratic society.That to demonstrate is not breaking the law, it matters not one jot if you shout `only perverts kill for pleasure`, never has a truer statement been made after all. You have the right to protest about about the crime of war and to inform the public of the resulting war dead. The right to have a conscience, and to exercise that right. The right to privacy in ones home.You have a right to stop the desecration of the planet by big greedy evil ones. And others...................ALL GONE !
Socpa was ere.

Dear Berk,
I am anti police state and would like to see the Socpa laws of oppression repealed .
Don`t know where your coming from but why don`t you ....off back there.

See detailed report on the court hearing at