Nottingham City Council have started a consultation process, with a view to shutting the Victoria Baths next to Sneinton Market. The council say: "Closure of the centre, which is situated near Sneinton Market, is being considered. On Monday 19th February about 100 people protested outside the Council House to demonstrate against the possible closure 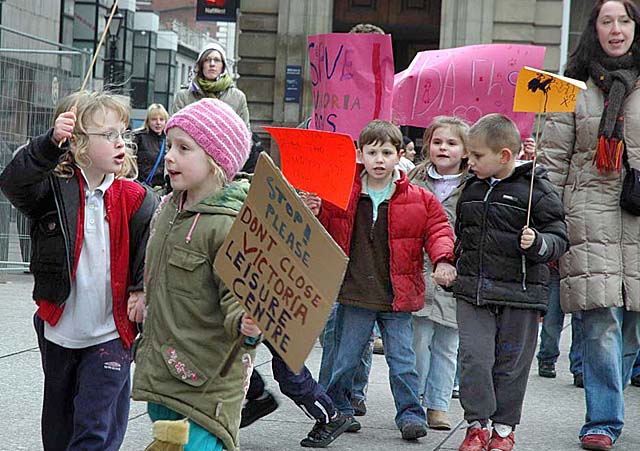 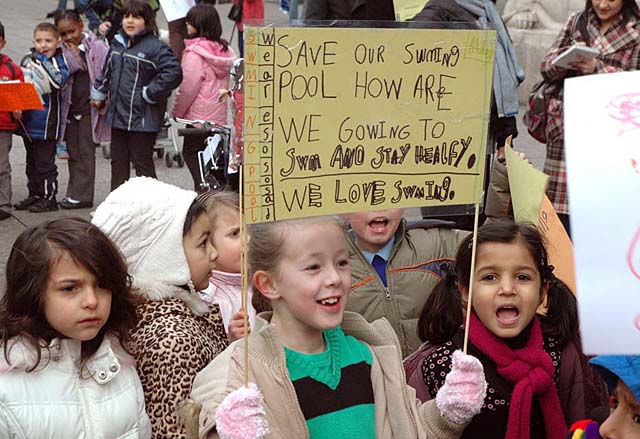 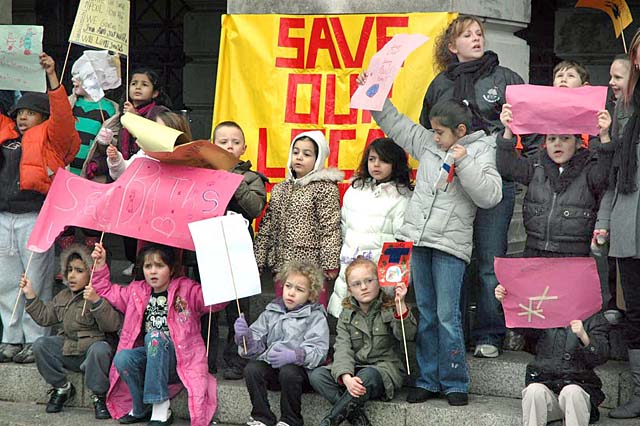 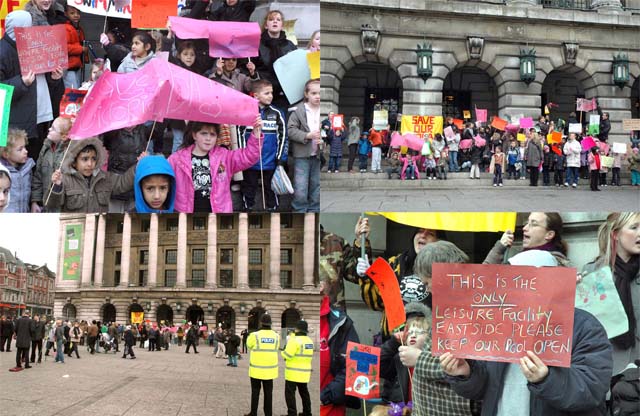 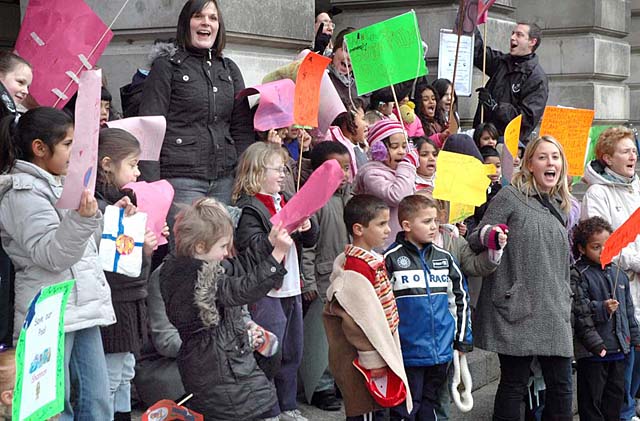 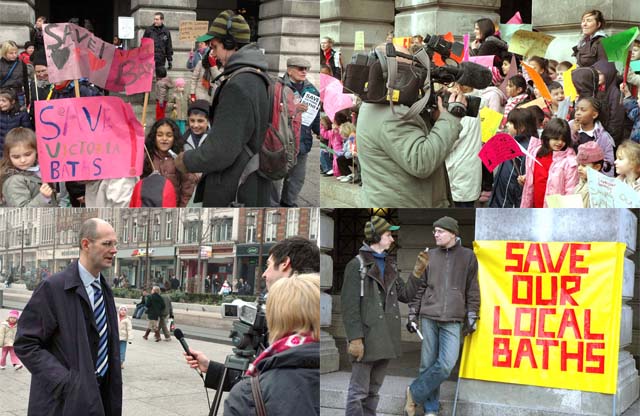 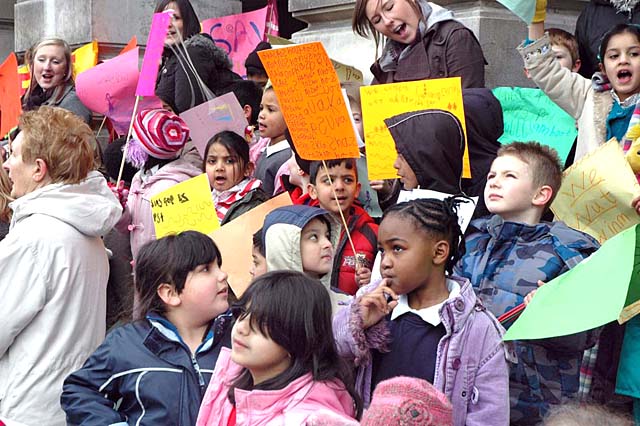 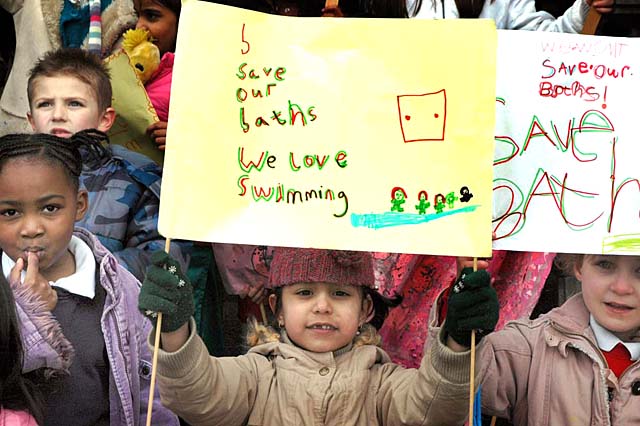 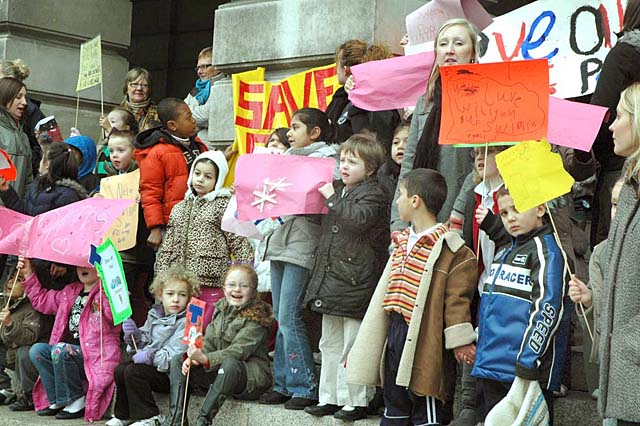 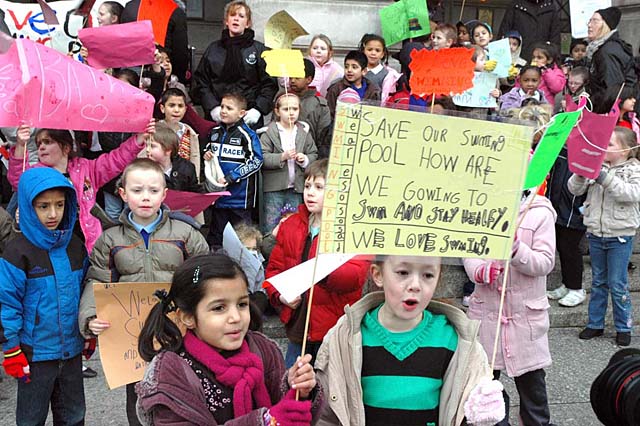 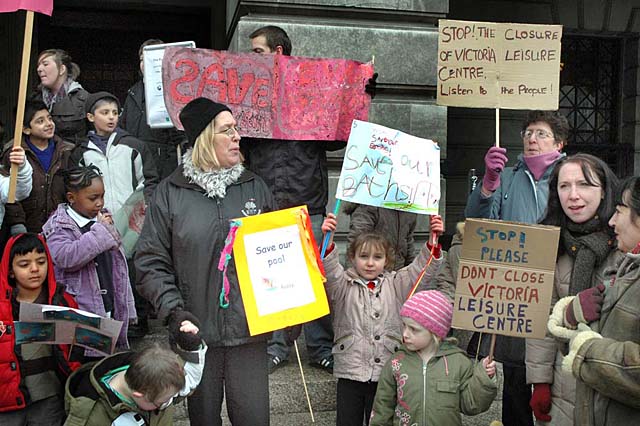 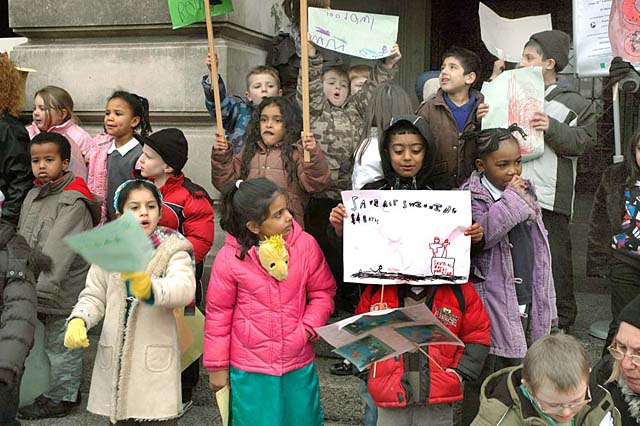 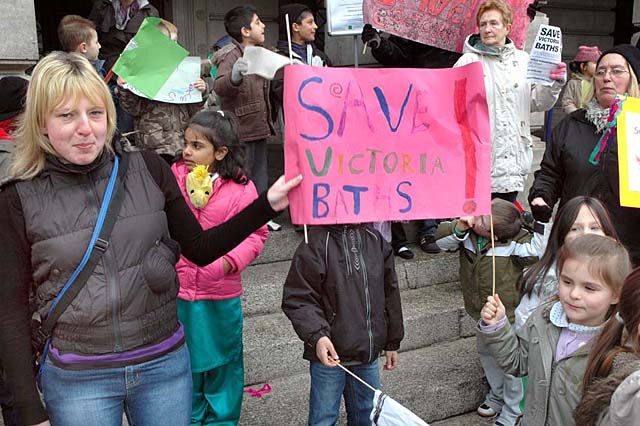 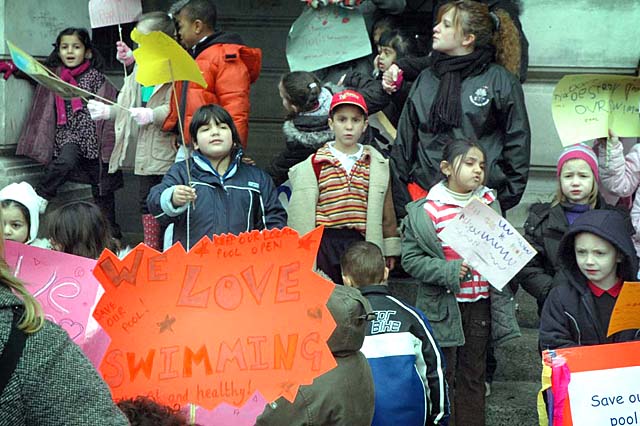 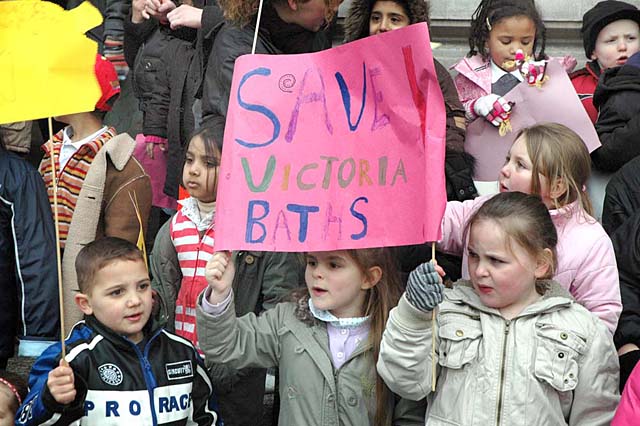 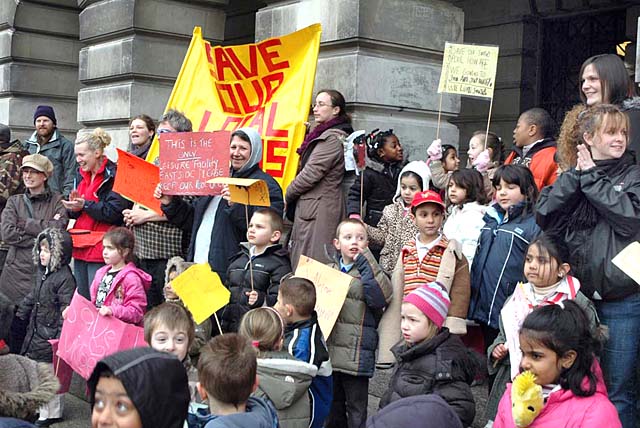 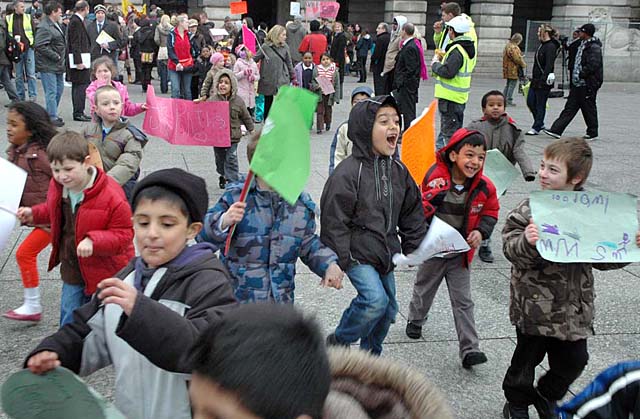 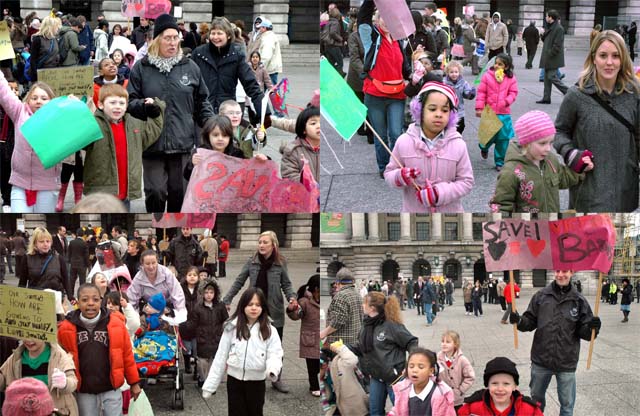 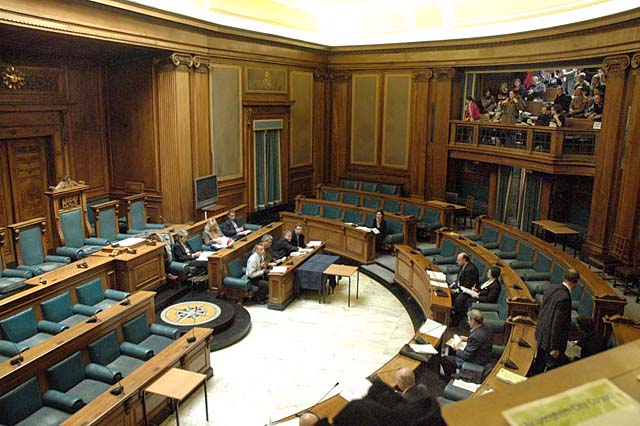 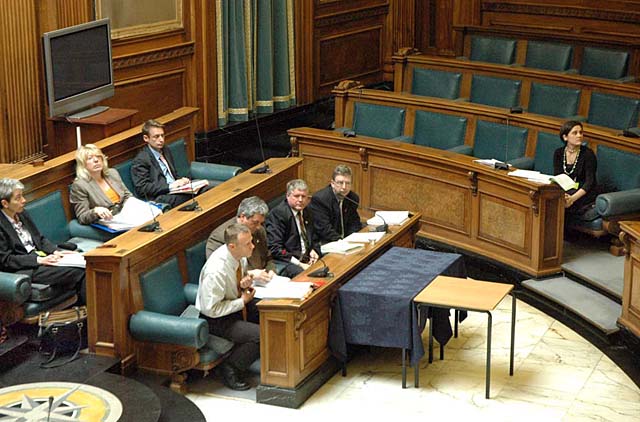 Nottingham City Council have started a consultation process, with a view to shutting the Victoria Baths next to Sneinton Market. The council say: "Closure of the centre, which is situated near Sneinton Market, is being considered.

On Monday 19th February about 100 people protested outside the Council House to demonstrate against the possible closure of the Victoria Baths & Leisure Centre. The demo was noisy and enthusiastic, well assisted by children from the William Booth Primary School who kept up a chant of "Save our swimming pool". They all use the facility regularly.

A number of the protesters then wanted access to the council meeting. Initially, they were told they couldn't and there were some heated exchanges in the Council House Lobby. Then there was only facility for 20 of their number. So the option of selecting 20, or a rotation of 20 folks at a time for a period was offered. Demonstrators then pointed out that there could be a third option, and that would be to hold the meeting in a larger room!! What a good idea. There was a widespread suspicion that restricting space was a ploy to minimise their effect. Discussion were had backstage, and the council committee was then moved to the main chamber. All present thus were able to fit into the public gallery.

Coun David Trimble [culture, leisure, and community] presented the report to recommend closure of the facilities supported by Councillor Jon Collins, Leader of the Labour group. Essentially, the city's case is that the building is well past its 'sell by' date [being over 150 years old], and that it is a case of spending increasingly larger amounts of cash on the upkeep of the building.

The principle argument against were that its closure means that the entire area on the eastside of the city would then be devoid of any such facility. Sneinton and the whole of the surrounding areas are considered to be some of the most disadvantaged in the city and have the associated health issues of such a deprived area. Really, it seems that the suggested closure sits ill with the notion of facilities for exercise and health living. People also say that the baths are really part of the 'community infrastructure' and that their loss is another blow for the areas identity and surrounding businesses.

Within the council debate, Liberal Democrat Coun Tony Sutton was the only one to vote and speak against the proposals. He pointed out that the plans first published in 2004 recommended that the centre be re-developed as part of the regeneration of the 'eastside zone'. Not just demolition was being considered. Coun Sutton said not much had been heard since then and then suddenly consultation has to be conducted within a month! He said he wondered if this was because there were already plans to sell the land? This got loud cheers for those in the public gallery, clearly a widespread suspicion. The suggestion was denied. Then, when he asked about the how the criteria would be assessed in the consultation procedure differing accounts were given. Those in the gallery also noticed this!

Just recently on the 8th February 2008 Nottingham City Council announced their proposal to close the Victoria Leisure Centre in Nottingham. They plan to make a final decision about its fate at the next executive board meeting of the council on 18 March 2008.

If you’re concerned, join the campaign to stop the closure of Victoria Leisure Centre! Visit the campaign website at

On Saturday 1 March 2008 at 11.30am in Market Square. People will congregate outside the Council House in Market Square to march to the Victoria Leisure Centre, where a public meeting will be held.

Please download and print the flyer for the next demo at:

Talk to the councillors:
Victoria Leisure Centre is in St Ann’s ward. There are three councillors for this ward who are Jon Collins (Labour), Dave Liversidge (Labour) and Sue Johnson (Labour). They hold drop-in surgeries every week to discuss issues with local residents. Please attend one of these surgeries and let them know your views on the council's plans to close Victoria Leisure Centre. St Ann’s ward surgeries are held at:

The online petition is now up and running. Please sign it:

Also check out the latest info on the campaign website:

Closure of Victoria Leisure Centre in 2008:

Council asking for your views here:

Jon Collins is preparing to escape the wrath of the people of Sneinton if the closure of the centre goes through. He has just bought a copy of Long Way Round, a round the world travel adventure! 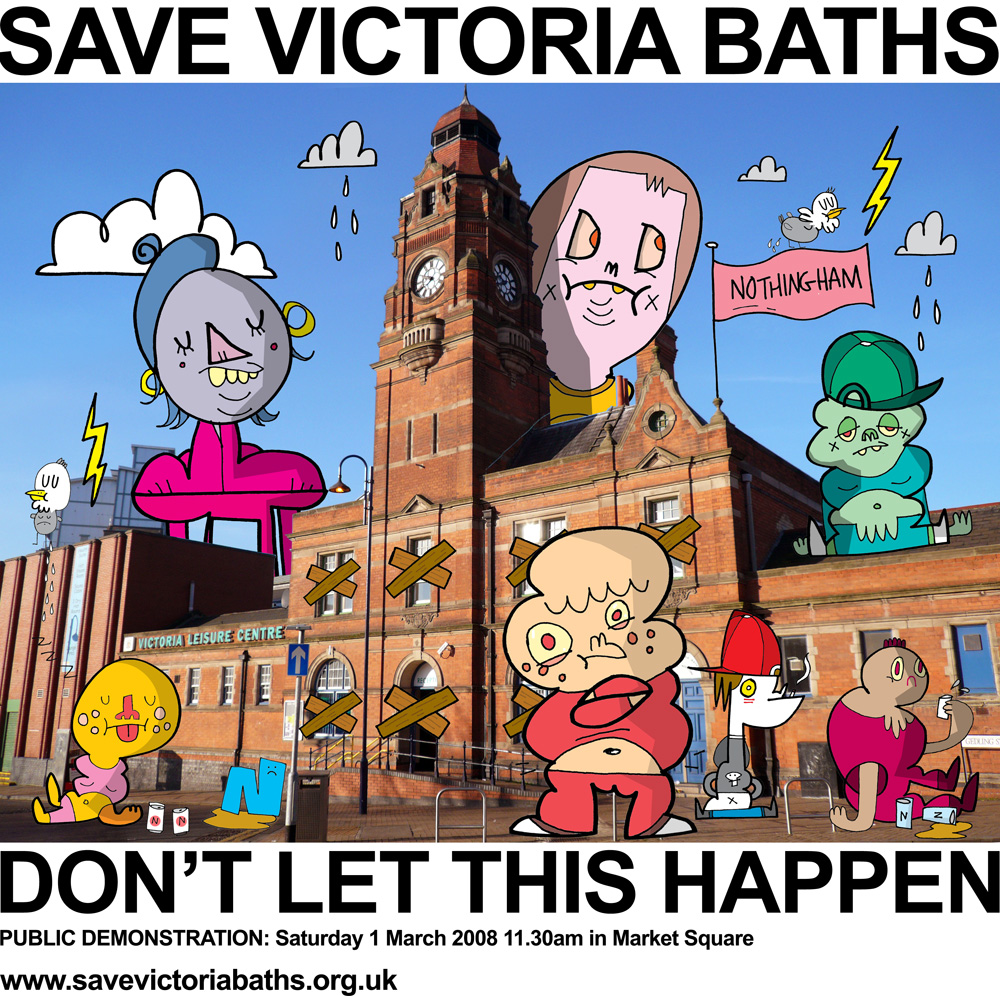 PRESS RELEASE TO ALL NEWS EDITORS
FOR IMMEDIATE RELEASE

The public meeting will be in the Sports Hall and will be open to anyone who wants to come. The meeting will be chaired by local resident, Jenny Elliott. There will be an opportunity for the public to hear all sides of the argument and to ask their own questions

Presenting the Council’s case will be Michael Williams, Corporate Director of Community and Culture for the City. Presenting the case of the Save The Victoria Baths group (SVB) will be Mat Anderson, Chair of the group. In addition there will be panel of experts to answer questions and contribute. These will comprise Ian Wells for Nottingham Civic Society, Jean Thorpe for UNISON, Tony Holmes for Nottingham Amateur Swimming Association and Andy Atherton for the Lenton Centre. An invite has also been extended to Lib Dem Councillor, Tony Sutton.

The closure of the VLC and the lack of any plans for a replacement wet/dry facility will have a profound impact on the St Anns and Sneinton areas. The Council wishes to tackle inequality of provision, to address the wide-disparities between areas like St Anns and Wollaton. In the One Nottingham Vision, it states: “A key focus is targeting resources and services to reduce health inequalities, primarily by focussing on areas of deprivation”.

However, under the Council’s plans people who live in some of the most deprived areas of the UK will lose their swimming and leisure facilities, compounding the poor health of the local population and adding to their decreased life-expectancy. The move will go against the Council’s own vision as laid out in One Nottingham’s Vision for Nottingham: “We want to create a safe, supporting and stimulating environment for children and young people to raise their aspirations, enjoy good health and achieve their ambitions. (We want to) tackle health inequalities and promote active lifestyles and ensure that Nottingham people are able to live their lives independently. A key focus is targeting resources and services to reduce health inequalities, primarily by focussing on areas of deprivation”

The closure will also have significant impact on Nottingham’s Primary Care Trust’s target for increasing life-expectancy, cutting deaths from cancer and heart disease and tackling obesity in children a target which the PCT already admits is missing.

Local schools will not be able to have regular swimming sessions as they will not have time within the curriculum to travel further afield to swim. Headteacher Andy Mattison of William Booth School says: “We use the pool for swimming, which is great because it's 5 minutes away and we can walk. I find it amazing that (the Council) can glibly talk about removing an important health and leisure facility for Sneinton/St Anns residents without any coherent plan for any sort of substitute. Two buses to anywhere else is NOT an easily accessible alternative”

The plans by the Council to encourage users of the VLC to go elsewhere in St Anns for their leisure overlooks the importance of swimming as a life-skill. The Royal Life Saving Society say: “no amount of muscles and other sports will stop you drowning if you can’t swim!” The Council plans to encourage people to swim at other Leisure Centres. Its One Nottingham plan states: It is important to take into account where and how services are provided as our most deprived communities do not access services”. Yet many people in St Anns and Sneinton do not have cars; and given the well documented antagonism that exists between communities such as the Meadows, Radford and St Anns, few (especially young people) would wish to venture there.

The VLC has been beset by lack of capital investment over the years. Since as far back as 1992, the Council have regarded the VLC as inappropriate and have behaved accordingly when apportioning tax- payers’ money. Despite the millions spent on Portland, Ken Martin and the Tennis Centre, the VLC has had very little spent on it to improve its condition. No surprise then that the Council are quoting high figures for its refurbishment. Equally unsurprising is the lack of transparency around those figures: they have come from the Council’s own asset survey team and the user figures have come from the Council’s central records rather than from the Centre itself.

Much has been made in the Council’s financial arguments about the cost of ensuring the VLC complies with the Disability Discrimination Act. Disabled users of the Centre have told SVB that they find access to and within the Centre “good”. One disabled user goes on to say: “I understand that the Disability Discrimination Act requires ‘reasonable adjustment’. I do not see closure, decommissioning & demolition as ‘reasonable adjustment’.” Disabled users are restricted by their mobility in their choice of exercise. “Swimming is my only form of exercise. If this facility is closed my mobility, physical & mental health will suffer.”

The Council chides the Turkish Baths as not well used, but again neglects to address the lack of investment to keep them usable and attractive. The Turkish Baths have been opened since 1861. The VLC is of considerable historic value both to the City and to the Sneinton Market conservation area in which it stands. It housed the City’s first public baths, a special Jewish Baths for cultural/ceremonial purposes, a Tarbottom wrought iron pool (who’s iron work is the only surviving example of its kind in the Country) and many other distinctive features (see below).

People are bewildered by the sudden announcement of the plans for closure and also the unseemly rush to “consult” over these plans. In 2004, the Council assured the City that there would be moves to find a way to develop the VLC, and that there would be a sum of £4 million available for refurbishment. This £4 million was never spent on the VLC. Assurances were given that even if the VLC were ever to close, it would not do so until another similar facility East of the City was built. The Council has no plans for this.

There is growing suspicion amongst local people that the Council wishes to capitalise on the value of the land the Centre stands on by selling it to developers who will place more tall buildings upon it.

For more detailed info on the points raised above, including PCT figures and historical information please contact Mat Anderson 07919 035671

For interviews and photo opportunities please contact Mat Anderson 07919 035671. There is a lot of info on our website