The past two weeks have seen further demonstrations outside French Living in the city centre to highlight the plight of millions of ducks and geese who face extreme suffering and death in the production of foie gras, so dubbed a ‘delicacy of despair’.
Nottingham Animal Rights have conducted peaceful demonstrations outside the restaurant to much success, and widespread public support, twice weekly consistently for the past few months – recently enjoying relative freedom of demonstration and a seemingly more relaxed approach from Nottinghamshire Police Force.

Unfortunately, recent police response on Thursday 21st February seems to suggest a return to the heavy-handed police approach that came to characterise earlier demonstrations in this campaign’s history. Section 14 was employed to disperse demonstrators, insisting on those present moving at least seven foot away from the entrance to French Living and through imposing such conditions undermining the demonstrators’ ability to interact with the public directly and distribute leaflets. The pretext for such action was supposedly the ‘intimidating’ nature of certain placards and materials revealing the true nature of foie gras.

Frustrated, demonstrators visited (voluntarily) the police station to voice their dissatisfaction and concerns as to the legality of the section 14 order, only to be informed by the seargent that he was satisfied as to the validity of the conditions imposed and that further challenge would only be possible through the courts.

Never the less foie gras demonstrations will continue, and further details follow at the end of this article. To produce foie-gras, young ducks and geese are confined to small, restrictive cages and routinely force fed through a metal tube forcibly inserted down their throat – the tube itself is often responsible for potentially fatal lacerations and subsequent infection. Repeated force-feeding causes their livers to swell up to 10 times their natural size, essentially inducing liver disease. The product, foie-gras, or literally ‘fatty liver’, is subsequently marketed and served as a delicacy. This practice is so cruel that its production would be illegal in Britain, but free trade laws permit its import and sale.

For both events, please meet at the Lions in Market Square at 6.45pm.

Come on.... being moved to a distance of 7 ft away from the entrance is hindering your chance to interact with the restaurants customers and hand out leaflets ? Don't be so ridiculous! If the customers wanted your leaflets I'm sure they would be able to take the three or so steps to move up to you and take one; and as for not being able to interact? having heard the noise you folk make, I'm sure a distance of 7ft wouldn't make much difference.

Get some perspective! Despite your rights to protest, the police were quite correct to have imposed a 7ft distance between you and the entrance. If you want to be successful, why not try relying on non-intamadatory tactics instead of being so 'in-your-face' with people. 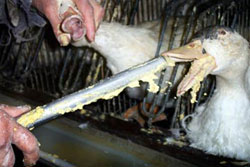 "York Action For Animals members were raided on 7th March on trumped-up allegations - it was a fishing expedition to sieze computers and mobile phones.

At 7am doors were kicked in and a search warrant was produced - this was a political action by the police and although there are minor allegations - no criminal offences have been commited.

Perhaps it was only a matter of time before this happened, YAFA have been too successful to be left alone, but anyone that thinks that we are living in a democracy is living under an illusion - free speech and the right to peaceful protest is a joke."

A news report at

http://tinyurl.com/2qac4y says "YAFA organised a series of demonstrations outside the Blue Bicycle restaurant in York, which it said was the last in York to sell the controversial paté. Earlier this month, it claimed victory, saying foie gras had been dropped from the menu."