Action for squats and autonomous spaces in Nottingham

On Friday 11th and Saturday 12th of April, we are planning to answer the international call out for two days of demonstration, direct action, public information, street-party, squatting etc in defence of free spaces and for an anti-capitalist popular culture. 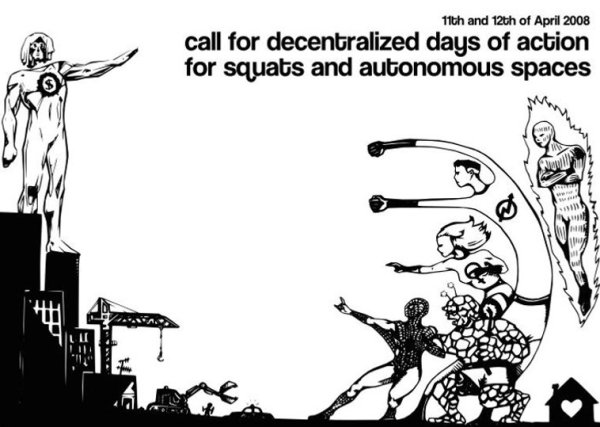 People from a number of cities across the UK have already announced that temporary autonomous spaces will open for the 11th and 12th of April 2008. A group of people will open a temporary autonomous space in Nottingham city centre. We want this (hopefully) vibrant and public space to be an exuberant response to news of a final closure of the ASBO.

By visibly taking a space in the city centre, we intend to raise awareness of squatting and so contribute to a future of squatting in Nottingham with more long-term squats elsewhere in the city.

One goal for this weekend of action will be to inspire and empower people who have previously been unfamiliar with squatting. By providing materials and information, workshops, squatters' handbooks and by relaying our own experiences, we can enable people to house themselves without compromising with capitalism. In addition, we can utilise the autonomous environment created by squatting for other needs than housing. Discussing campaigns and sharing knowledge and skills we can support one another and be
empowered ourselves, as well as drawing in new people by creating a vibrant and exciting place to be. This can be in the form of food, workshops, films, art, talks - and absolutely anything you are motivated to provide.

Over the last few weeks of meetings we've made some basic logistical decisions. We welcome creative, energetic and/or enthusiastic people, and everyone else, to help us realise and then use the space.


The call for international decentralized days of action for squats and autonomous spaces: