Nottinghamshire Police searched 2 houses yesterday afternoon after it had made two arrests at the blockade at E.On offices on Mount Street. The searches were 'authorized' under section 18 of the Police And Criminal Evidence Act 1984. Under this act; "A constable may enter and search any premises occupied or controlled by a person who is under arrest for an arrestable offence, if he has reasonable grounds for suspecting that there is on the premises evidence that relates to that offence". Both people arrested were released early in the evening and were charged with Section 5 public order offences. They are to appear at Nottingham Magistrates Court on April 14th. 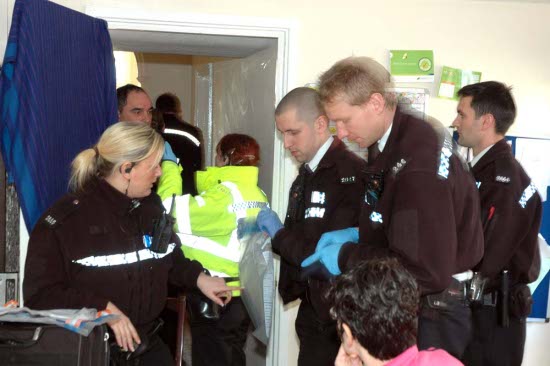 its harrassment not evidence gathering

Yes, this seems to be almost routine now. I hope they didn't take any computers or anything - they can do this in their search for 'evidence' and keep them more or less indefinately whilst 'analysing' them, and deciding whether to charge you. They also don't seem to respect different people's rooms or things in shared houses.

Lesson - move all your important stuff out before any actions.

...of what exactly? More unnecessary wasting of police time/resources. The people who where locked on were arrested there and then, having been watched/filmed by the police for a couple of hours, what more 'evidence' do they want? Idiots.

Not really necessary the cops are just trying their luck to see if something half questionable comes up. They never search anyone for common arrests, only when it is political, they show the fascists they are thats all.

just to let people know, after speaking to the solicitor about it, we are going to make a complaint about this. may not come to anything but is worth doing anyway.

intresting to note that i knew nothing of the raid until i had got out of the nick, and that they used my own key to get in. granted, that's somewhat better than them kicking the door in, but taking my key from my personal belongings and then returning them without my knowledege gave me a distinctly uneasy feeling.

when they were in the house, my partner wanted to follow them around but was told to stay in the kitchen! there were too many of them (7) to follow all of them but legally he should've been allowed to at least attempt to do so. when some concerned friends came to see what was happening, he asked if they could come in but got told that they would have to be searched if they did! they hardly spent any time in any room and it did just seem like an intimidation exercise.

Yet no searches when people are punched and pushed

Yet just 3 weeks before, ten people were variously threatened, punched, pushed, headbutted, throttled, by one person who had intruded into a project at the old ASBO building, who takes his violence and intimidation out into the street, where he continues to be aggressive, who had given his full name to the people he was assaulting, who lived upstairs in the building, but when the police arrive they knock on his door and when he doesnt answer they say they have no authority to go looking for him.

interesting to note amongst the blue rubber gloves in evidence in the photo, one police officer doesn't seem to need them as she leans on something in the room giving advice to a gloved up colleague. Thats a bit sloppy, don't you think?

when the police harrass and intimidate PEACEFUL environmental activists, go through their personal belongings and send them to court whilst simultaneously allowing the BNP who incite racial HATRED and VIOLENCE to organise freely and even "protect" them from counter-demonstrations you really have to start to wonder what kind of society we live in...