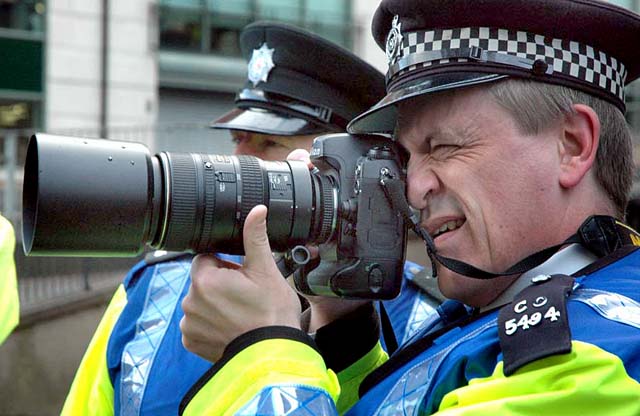 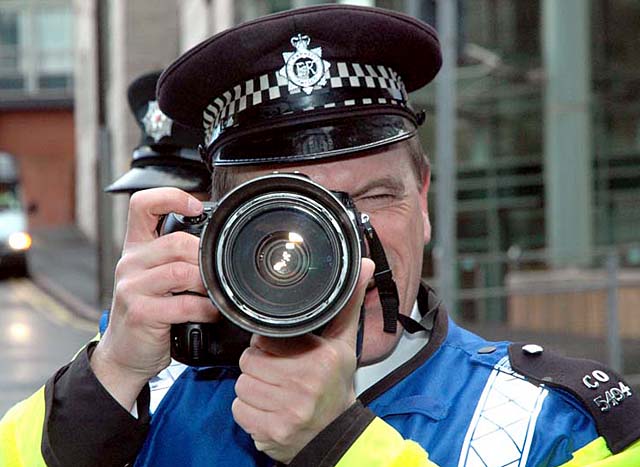 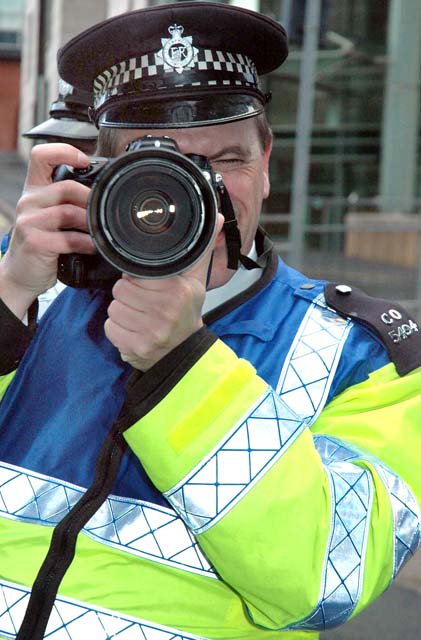 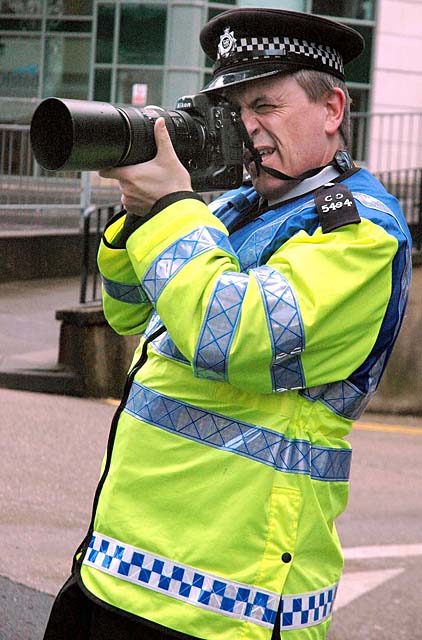 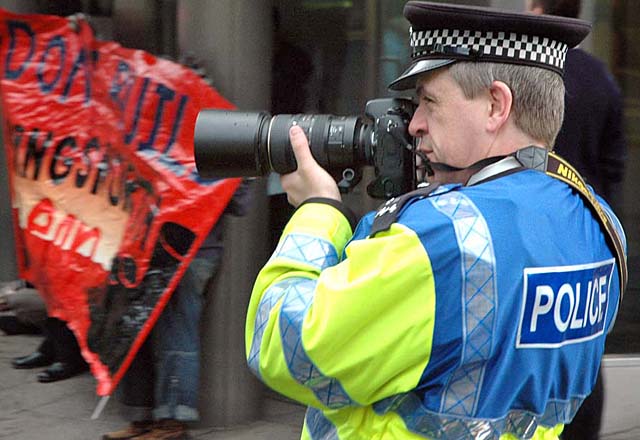 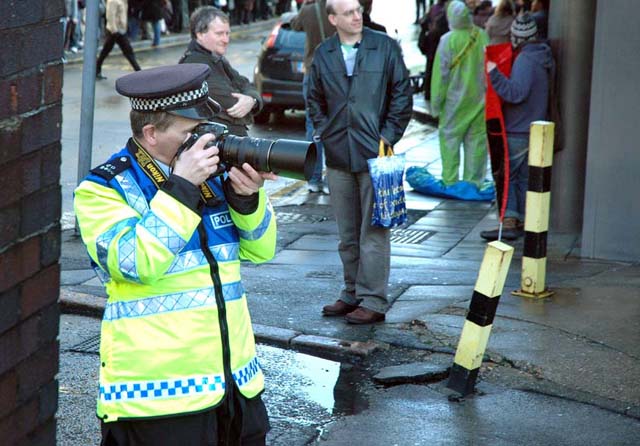 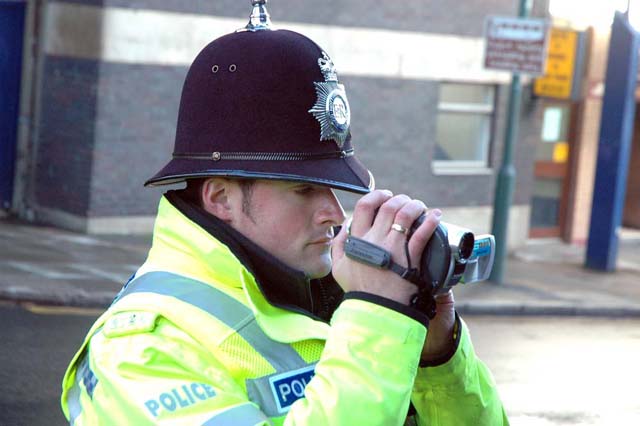 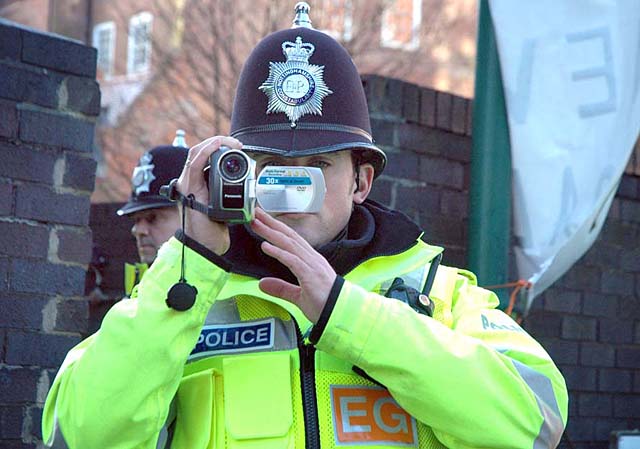 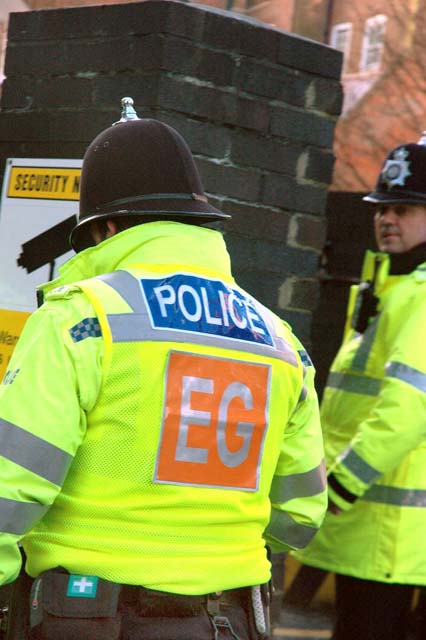 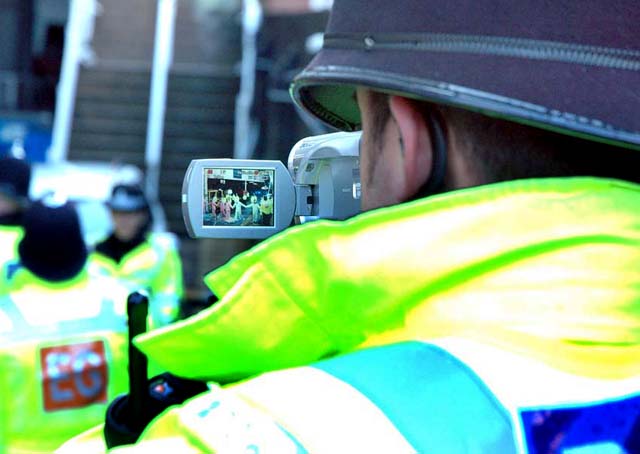 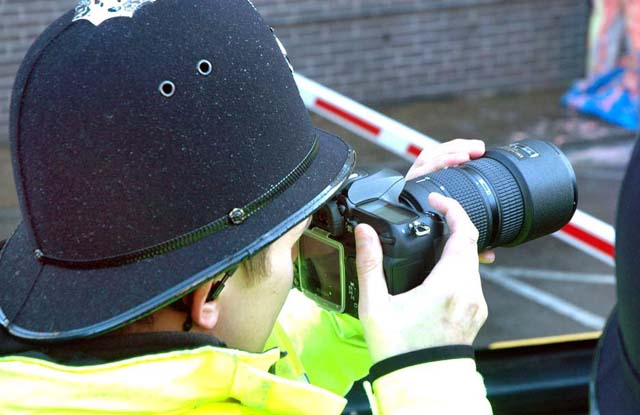 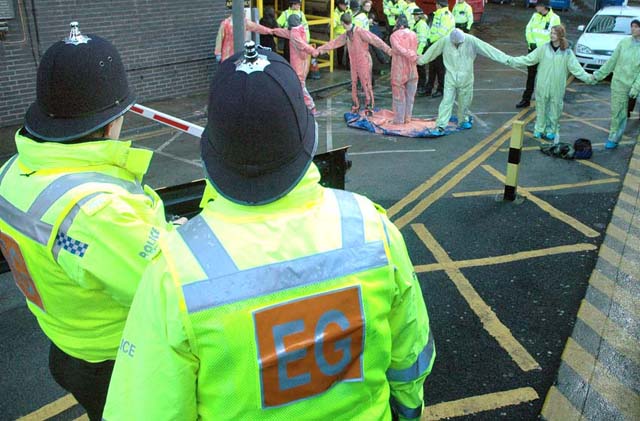 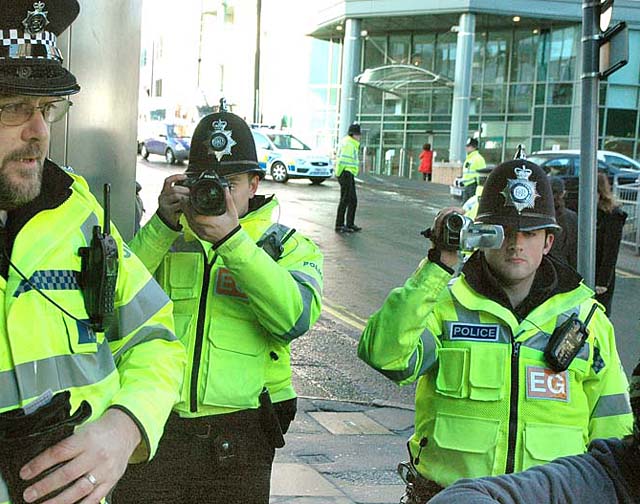 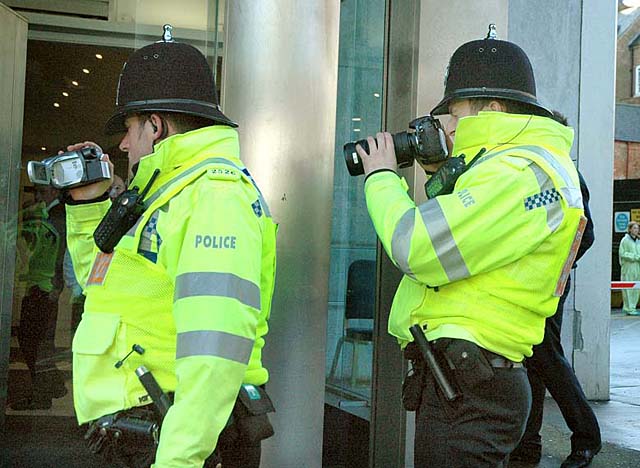 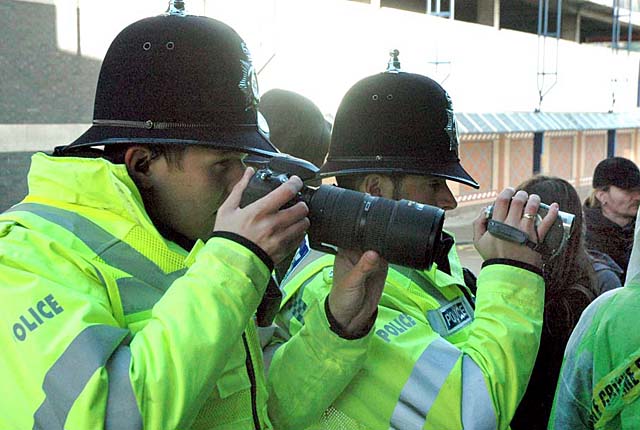 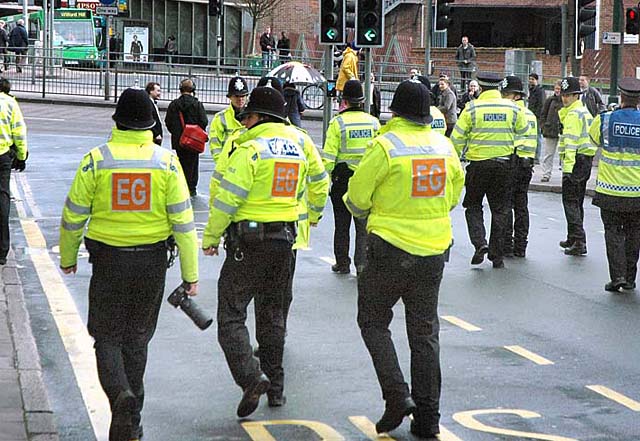 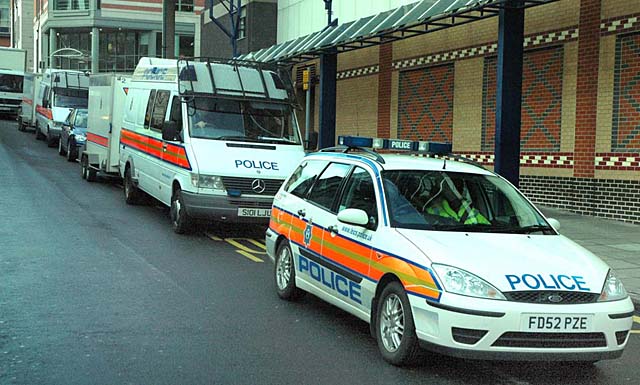 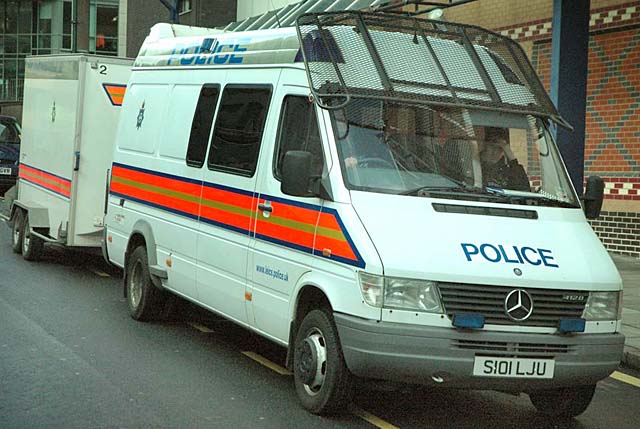 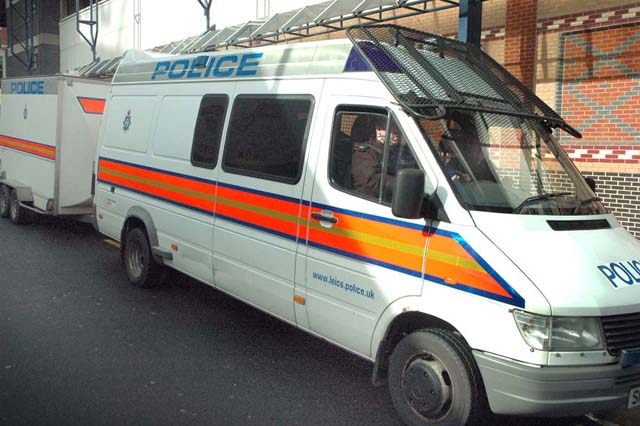 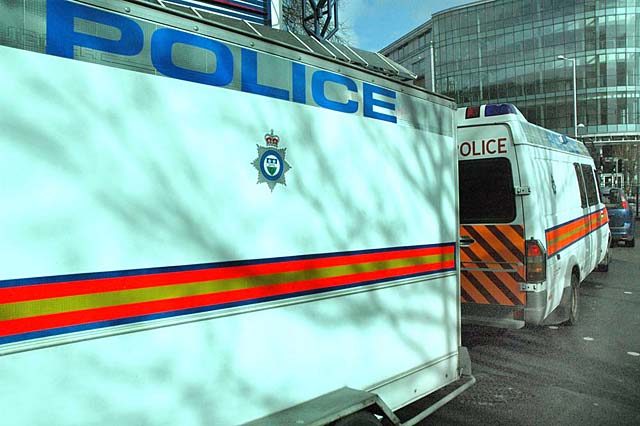 However, I feel the the level of surveillance was quite intense and worthy of noting here.

Police surveillance is carried out within five main 'levels'.

1) a police constable gets given a camera and told to go out and take some pictures of 'em. There were a few examples of this I've seen in the past, with policemen struggling to work out exposure, focus etc......

2) 'Evidence Gatherer' [EG] The policemen have been on a course. They operate both still and video cameras. They have technical knowledge and an idea of of what constitutes evidence for presentation in court. They are mainly used at protest / public order etc.

3) Scenes of crime photographers, frequently are civilian staff, sometimes seconded by police to public order operations, but mainly photographing 'still life' scenes. Again with knowledge of the rules of evidence.

4) Forward Intelligence Team of the Metropolitan Police. Derived from earlier operations and CO11, the Public Order Operational Command Unit of the MET. Obviously they are Evidence Gatherers also, but they are frequently deployed at events of a 'political nature' and where crime is not a main issue. They are to gather evidence of crime of course, but the sub-text of their involvement at many events is that of intimidation to those attending events. Further, by their operations, to attempt to dissuade people from attending events, thus to minimise their effectiveness.

5) Security Service and Special Branch operations. All undercover and very 'secret squirrel'. Hard to know when this is carried out, and against who.


At this event, some say that they were honored, that we warranted the attendance of an officer from the Forward Intelligence Team of the Metropolitan Police CO 5494 PC Ian Skivens [CO stands for 'Commissioners Office', officers deployed 'extra' to divisions].

Another working with him was from the Police Service For Northern Ireland PSNI. This being in addition to the Nottinghamshire Police Evidence Gatherers.

Also in this set, you can see the vans and trailers from the Specialist Operations of Leicestershire Police. As it happens at this gig, they were not required, but if the chains and D-locks did need cutting, these were the guys that would have done it.

So, collectively, quite a lot of kit really.

Links on these matters at:

http://tash.gn.apc.org/surv_10.htm
Surveillance - On being Watched:

http://tash.gn.apc.org/face_rec.htm
Press on the 'eco - police'

On Tuesday morning 30 people blockaded the entrances to E-on's offices on Mount St, Nottingham City Centre. People covered in green paint to represent E-on's greenwash, locked onto the front entrance to E-on's office and stood in front of other entrances preventing E-on workers from getting to work.

At 7:30 Tuesday morning 30 people blockaded the entrances to E-on's offices on Mount St, Nottingham City Centre. People covered in green paint to represent E-on's greenwash, locked onto the front entrance to E-on's office and stood in front of other entrances preventing E-on workers from getting to work.

At E-on's offices today, Bob Castle said “We are here today because despite E-on publicly claiming green credentials, it is trying to build a new generation of coal fired power stations. It is trying to build the first new coal fired power station in the UK in 50 years, at Kingsnorth in Kent, and wishes to continue its expansion with a new power station at High Marnham in Nottinghamshire. We are here to tell E-on that they will not succeed and the only real solution to climate change is to keep fossil fuels in the ground. Coal is the dirtiest Fossil Fool and to build new coal power stations in the face of climate change is collective suicide.”

Fossil Fools Day, called by the international Rising Tide network and its allies, has seen over one hundred actions take place around the world. Protests have focused on the companies responsible for runaway carbon dioxide emissions, as well as complicit governments and those promoting false solutions.

While Eastside Climate Action were visiting E-On in Nottingham, other groups around the UK were in Parliament Square (where People and Planet built a coal power station complete with 12ft cooling towers), Porsche HQ in London (where a public apology was issued on behalf of Porsche), the Department for Enterprise, Business and Regulatory Reform (where WDM held the world’s first laugh-in over plans for new coal at Kingsnorth) and Manchester City Centre (where a parade toured the city’s biggest fossil fools).

“We are taking action to prevent the fossil fuel industry from destroying our future,” said Bob Castle from Eastside Climate Action. “Vested interests in business and government are bent on pursuing economic growth at all costs. We need to shrink, not protect, the fossil fuel economy if we are to survive climate change.”

1)E-on own Ratcliffe on Soar Power Station the site of protests by 11 people who locked themselves to machinery to prevent coal entering the power station. The judge in the trial agreed that the 11 defendants had acted to prevent death and serious injury from the release of CO2 from Ratcliffe into the atmosphere.
2)Ratcliffe is the largest CO2 emmitter in the East Midlands and 2nd largest in the UK
3)Despite E-on's green claims they only produce 9% of their energy from renewable sources.

http://www.energyrisk.com/public/showPage.html?page=449443
5)E-on plan to build the UK's first new coal fired power station, plans that are opposed by groups from Greenpeace to World Devolpment Movement.
6)The Climate camp, (which previously held camps and did actions at Drax and Heathrow) plan to target Kingsnorth this year. www.climatecamp.org.uk
7)E-on also plan to build a new Coal Fired Power Station at High Marnham near Retford in Nottinghamshire.

I wouldn't want to speculate on the size of Mr Skivens tackle or his ability to get it up. But that is a very big lens for people who are stood just a few feet away. Is there something missing in your life Ian?

Ta for the piccies

Have pinched a couple of Mr Ian Skivens and attendent evidence gatherers for the fitwatch blog.