Leaflets for Nottingham squat days of action this weekend

This weekend a temporary squatted space will be opened up in the centre of Nottingham, hosting two days of food, workshops, films, discussion, zines, free jumble stalls and partying. 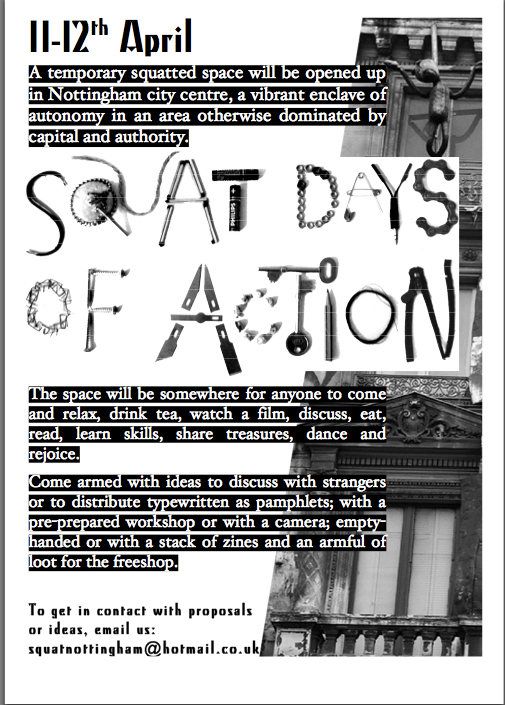 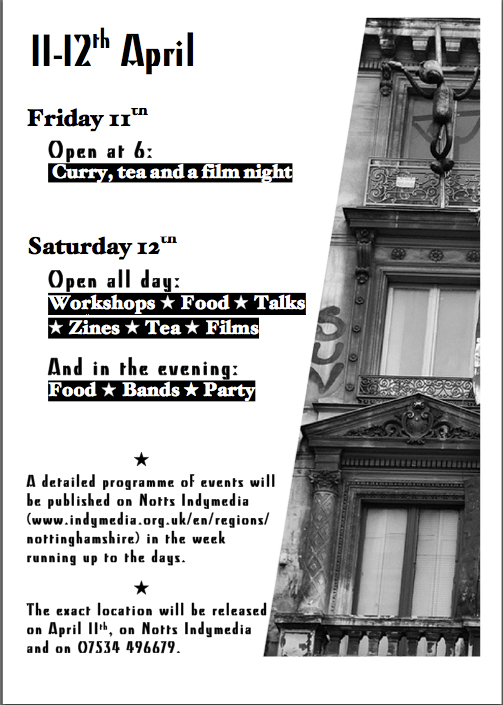 Leaflet back - reproduce and distribute!

At a time when the dominant social logic sees public spaces increasingly tightly regulated and green spaces built upon in order to solve a "housing shortage", we (a nameless, ad-hoc, open collective) will be opening a vibrant space in Nottingham city centre, hoping to change the way we think
about the spaces and structures around us, to conjure DIY spirit to ward off The System (TM) and win some autonomy, and to have fun.

The space will be somewhere for anyone to come and relax, drink tea, watch a film, discuss, eat, read, learn skills, share treasures, dance and rejoice.

Come armed with ideas to discuss with strangers or to distribute typewritten as pamphlets; with a pre-prepared workshop or with a camera; empty-handed or with a stack of zines and an armful of loot for the freeshop.

Exact details of the location will be released on April 11th, and will be available here on Nottinghamshire Indymedia, or by calling 07534 496679.

If you want to get in contact with workshop proposals, encouragement, ideas, or criticism, you can reach us at

Other cities in the UK have also already announced actions on this weekend.