A coal mining firm is considering reopening a pit in Nottinghamshire which could be the deepest in the UK and one of the largest in Europe. According to the BBC, Doncaster-based UK Coal are looking at reopening the Harnworth pit which closed in 2006. The pit is likely to reopen later this year, and could, they claim, create 400 jobs, although production would not actually be restarted for a further three years. Studies are being carried out at the moment, but the company believes there could be as much as 40 million tons of coal available at the pit. 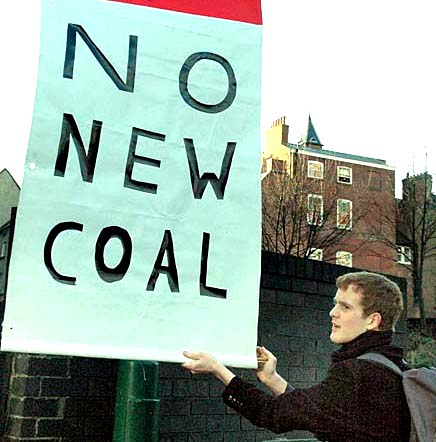 No To New Coal ! (Photo by Alan Lodge)

Jeff Wood, vice president of the Union for Democratic Mineworkers (UDM, most famous for scabbing during the Miners' Strike), welcomed the reopening of the pit, coming, as it does, when the Wellbeck colliery in Nottinghamshire is coming to the end of its workable life and facing closure by the end of the year: "The good news is... there's now an opportunity to transfer to Harworth, which could potentially mean another 20 to 25 years of work."

With coal power a central concern of various climate change action networks, the reopening of Harnworth may not pass entirely unopposed. All the coal produced by UK Coal goes to customers in this country. The biggest of these are Drax Power Station in Selby, North Yorkshire, which in 2006 was the target of the first Climate Camp, as well as power firms EDF and E.ON. The latter has already been visited by local climate campaigners on more than one occasion. Last year, activists came close to shutting down the the E.ON-run Ratcliffe-on-Soar power station and on April 1 this year, the company's offices on Mount Street, Nottingham were blockaded as part of Fossil Fools Day.

I can somewhat sympathize with U.K Coal on this matter. A couple of year ago their subsiduary (Harworth Power) put in an application for a wind farm on the Eakring site - it got rejected. I have been to several wind farm planning meetings in the East Midlands and there are just so many nimby groups spreading lies and myths about wind farms not many are getting approved - 3 rejections in the East Midlands so far. I thought U.K Coal were being visionary in moving into renewables on old coal sites but I was in a tiny minority of people who openly supported their wind farm application.

It is fine to scorn and protest at companies but I believe we should do all the boring stuff too and support renewables. The latest issue at all wind farm planning meetings is VibroAcoustic Disease and it is causing many wind applications to be rejected. Climate change is not really a planning issue and the fact that it is killing people already is debateable in a room full of old coffin dodging grey haired pro nuclear Tory councillors!

If you were U.K Coal what would you do - carry on spending money on appeals and planning applications for renewables or stick to what you are good at and the technology you already have and open up/reopen a pit?

Planning laws suck but this is my simplistic account of the state of renewable energy in Nottingham - very poor and very under supported! 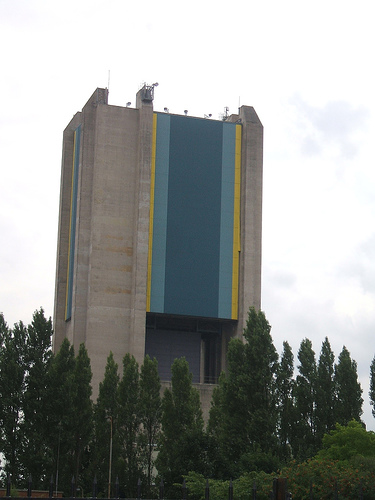 Just in case you were looking for the pit, this is what you can see for miles: the pit head at Harworth. This is one of the countries deepest mines going to depths of around 1000 meters. Photo by flickr.com/communityfriend

I remember going to groundswell meet by John Holmes of Radio Nottm with a few great people from Nottingham to support farmer+ pro wind people a couple of yrs ago. Definetely a national organised anti bloc of Tories& a few BNPers, with people shuttled in from areas no where near generator views.
A wind generator on a pithead put on appropriately could easily have been made safe, having the wind generators there would mean more maintenace to stop landslides not less.Ecotech cement invented in Australia & mentioned by syndicalist Solfed's Direct Action magazine 5 years before new scientist is now available.

Harsworth is 1000metres deep so its defineteley deep enough for serious geothermal & so will get hotter than others, what opportunity for us that community.
There are projects on geothermal mine projects starting in Poland & South east of Edinburgh& Durham capable of heating of upto 5000 homes a time from one disused shaft, Hawsorth is a ready made opportunity.
A french company runs one deep 1 metre diameter 1800m geothermal shaft in Southampton which supplies thousands of homes, a large hospital & shopping centre with heat,air conditioning & electric.There are appropriate criteria for geothermal Aquifer shafts & mines, studies done at EU level show one way is to just let the mine flood appropriately & energy is there for as long as we have a magna core,many billions of years my dears, nevermind a few seams that will run out soon. Annesley & other pits could also have wind generators put on if high enough & geothermal too.
Carbon capturing and compressing CO2 requires much energy and would increase the fuel needs of a coal-fired plant are estimated to increase the cost of energy from a new power plant with CCS by 21-91%.Seems Eon etc going to put in on greenwash flagship projects, carbon capturing also increases acidification of the sea making unable to support aquatic life,sea is already under pressure from excess CO2.

http://en.wikipedia.org/wiki/Carbon_capture_and_storage
We shouldn't be digging it up here or in China, its a dirty job,1000's miners are still claiming for lung damage etc. Tories were criminal for destroying livelehoods of mining communities without replacing it whatever the dispute with unions it was v.spiteful,apparently Thatchers CJB syndrome has gone full blown now.
Hopefully UK coal or a cooperative will set something up soon, certainly needs encouragement. I can be emailed about this anytime for further information on this topic & helping set up a cooperative there.

One of probs is anti's had a large pretty well organised, lying, misinformed people who seemed to have nothing better to moan about. We need more people to go to meetings to support wind as well as against coal etc. There was no funds to mobilise people, personally if we could have got money from UK coal to organise that community for alt tech we could have done it.


I do somewhat agree with your point about actively supporting renewables by turning up to planning meetings, but I think your sympathy for UK coal is misplaced.

If you look at their website it shows that they are really mainly a coal company who do a tiny bit of wind power dabbling on the side. I believe that is probably just to make them look as though they are doing something useful. But their main activity is still to help put more CO2 into the atmosphere than we need.

Given that over 150,000 people are already dying due to climate change every year (WHO figure), this activity has very serious consequences indeed, as I'm sure you are aware.

One arguement in favour of protesting more than turning up to planning meetings is that, given the short space of time that we have to get this problem sorted out, some people may feel that their energies (pardon the pun!) are more useful attacking the behemoth of engery guzzling industry, instead of putting a lot of effort into going to planning meetings for medium sized wind farms.

I for one subscribe to the notion that we need to drastically rearrange the way our society works in order to bring our need for energy right down.

Wind power will be a factor in that, but perhaps on a much smaller scale than the wind farms that are applied for currently. I think it is crucial to promote positive solutions and alternatives to the status quo, but for me, trying to get the odd 'token' windfarm built for a company who- I assume- doesn't share the notion that we need to drastically scale down all industry especially the energy industry, isn't the best focus.

But I do applaud anyone, such as yourself, who does feel that's where their efforts are best placed and who puts the time in accordingly.