In recent years Mayday in Nottingham has once again become a major celebration with the march from the Brewhouse Yard already something of a tradition. As successful as these demonstrations have been, they have taken place on the nearest weekend to May 1st, with little happening on the day itself. This year, the Mayday Organising Committee (an off-shoot of the Nottingham Refugee Campaign Group) felt that something should be done to mark the day itself and decided to organise a rally addressed by local asylum seeker Amdani Juma and former Guantanamo Bay detainee Moazzam Begg. 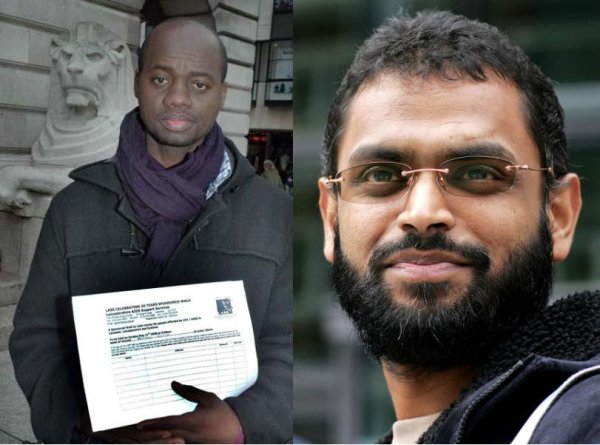 The event had originally been intended to take place in the International Community Centre (ICC) on Mansfield Road, but Moazzam Begg is a well-known name and a major draw, so it was felt necessary to move to the New Mechanics on North Sherwood Street. This was probably a wise decision as something like 70-80 people turned up on the day.

Before Moazzam spoke, the meeting was adressed by Amdani Juma, a local asylum seeker, familiar to anybody whose been involved in refugee issues in Nottingham. A refugee from Burundi where he was a pro-democracy activist, for which he was tortured, Amdani came to the UK in 2003 and was granted humanitarian protection. Since finding himself in Nottingham he has busied himself campaigning on refugee issues, raising awareness about AIDS, involving himself in various fora around the city and even became a member of Home Office run National Refugee Integration Forum. Despite all this, his application for Indefinite Leave to Remain was rejected by the Home Office and his appeal against this decision unsuccessful.

Amdani recounted his earliest celebration of Mayday as a child of eight in Burundi. At his instigation a one minute silence was held to remember workers across the world who had died in the struggle for a better world. His talk was wide ranging, but he stressed that he was proud to be an asylum seeker, because it meant that he was a survivor. He described his life as being like living more than one life, with his current struggle for Indefinite Leave to Remain being his fifth life. He also used the talk as an opportunity to promote the sponsored walk he is planning to undertake later in the month to raise money for an AIDS charity.

Moazzam Begg began his talk by musing on the word "Mayday," which he noted is French for "help me." An apposite phrase given his own experiences. Moazzam was one of nine British Muslims held at Guantanamo Bay by the US government. Released in 2005 without charge he has yet to receive any compensation or an apology. Since his release he has spoken widely and published a book, Enemy Combatant, in which he recounts his experiences of extra-judicial detention.

His neatly honed talk explored issues of freedom in the shadow of the "War on Terror." He noted that in surveys of "Britishness," the signing of the Magna Carta was often pointed to as a key event. The document enshrined protection against unlawful detention, a principle which was exported across the world, but which is now under attack. He pointed out that shortly after his abduction at gunpoint in front of his wife and children, his family had issued a writ of haebus corpus in the Pakistani courts. While unsuccessful, it demonstrates the idea's power.

He seemed interested in the way such high ideals had been corrupted and noted with irony the motto which had been plastered across the facility at Guantanamo: "Duty bound to protect freedom." It is this bizarre interpretation of freedom, he suggested, which allowed the US to dub the invasion of Iraq "Operation Enduring Freedom," as if freedom were something which had to be endured.

For someone detained for almost three years, Moazzam was surprisingly fair about his captors. he asserted that, while bad, Guantanamo was not the worst prison on earth. Simply the most notorious. He was clear that there were worse establishments, specifically those where people were killed or forced to see others killed. These, he explained, were what interrogators would threaten recalcitrant subjects with and a number of people being detained by the US have found them shipped to the likes of Egypt for a more thorough going-over than Americans had a taste for. In fact, his relaxed view extends so far that he hopes to tour, later this year, with a young American who had been one of his jailers.

Moazzam argued that the treatment of Muslims in the "War on Terror" with compared unfavourably with that of the Irish Catholic population in northern Ireland at the the height of "The Troubles." He pointed out that even at the height of internment, people were only being held without trial for up to three days. Now the government is seeking to give the police power to detain people for up to ninety days. He clearly saw this as a far broader issue. Noting that even former Secretary of State Colin Powell had called for the closure of Guantanamo he stressed that this would not address the problem of other, less prominent, detention centres (Bagram, Diego Garcia and others).

After the speakers, the discussion was opened up to the floor for questions and contributions. There was also an announcement about plans to mobilise against the BNP's Red White and Blue festival. The event is being held between 15-17 August in Denby, Derbyshire with campaigners planning to mobilise on Saturday 16 August from 9am.

All in all, this was an impressive, well attended event. The organisers are to be congratulated and there's something to build on for next year, but first there's the actual Mayday demonstration: 12 noon, Saturday May 5 starting at the Brewhouse Yard. Hopefully I'll see you there.

Also worth restating point made in meeting, about detention of asylum seekers. Some of those who were removed after arecent revolt at Harmondsworth/Heathrow removal centre (see report at

http://www.nobordersnottingham.org.uk/ ) are currently detained in Lincoln prison and local support is needed.

Plus small correction ... call me a pedant...