Below is the press release distributed by the Friends of Amdani Juma following his detention at Loughborough reporting centre and news that he is to be deported on Wednesday 4th June on Kenya Airways flight KQ101 (Terminal 4, Heathrow). In support, there was a well attended demonstration on Saturday 31st May, to highlight his case. 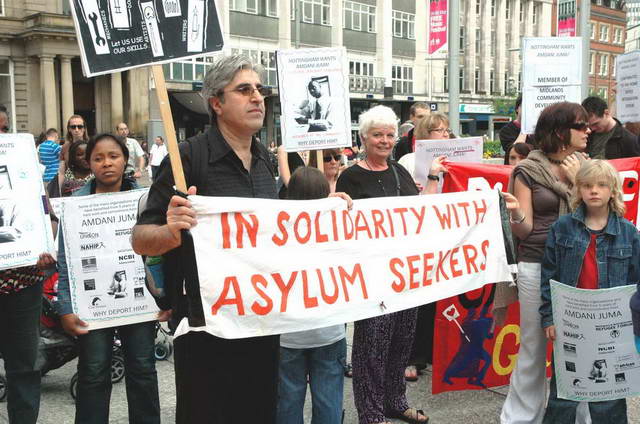 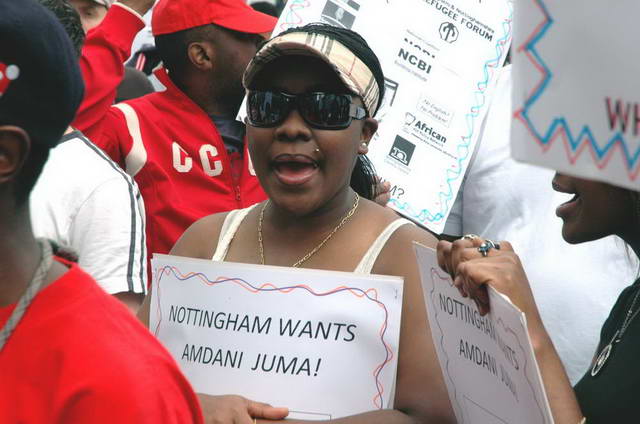 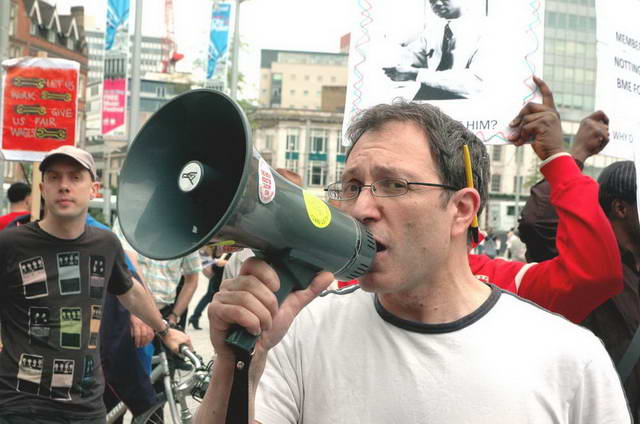 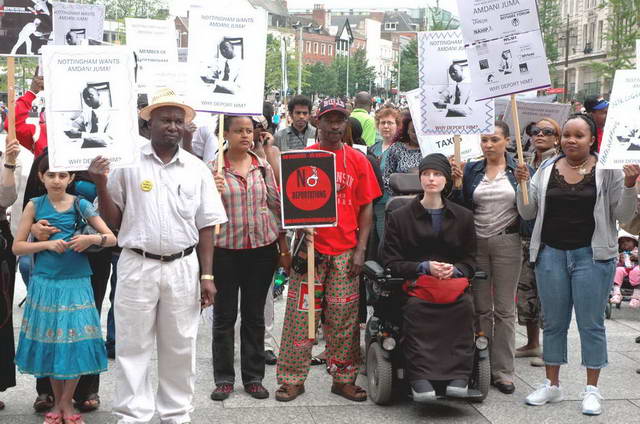 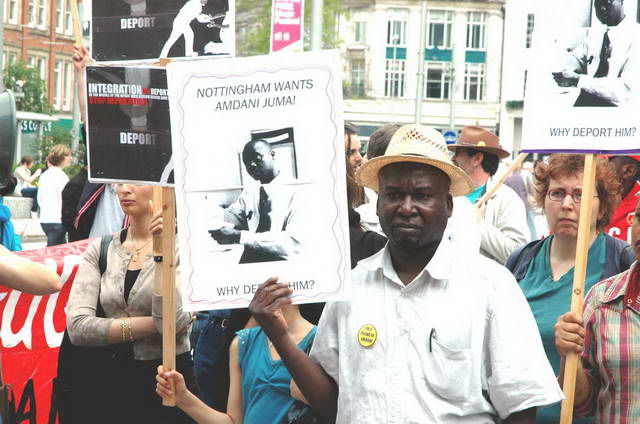 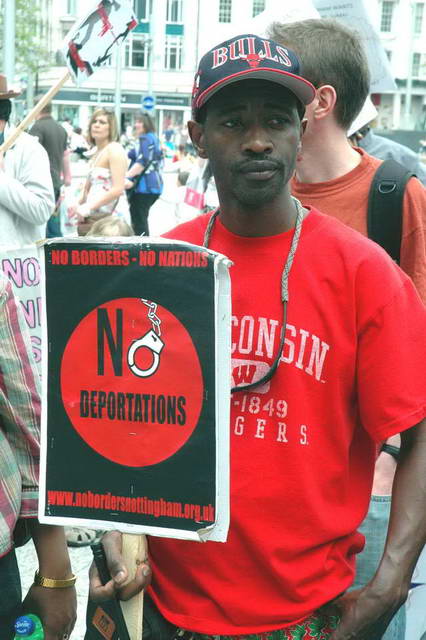 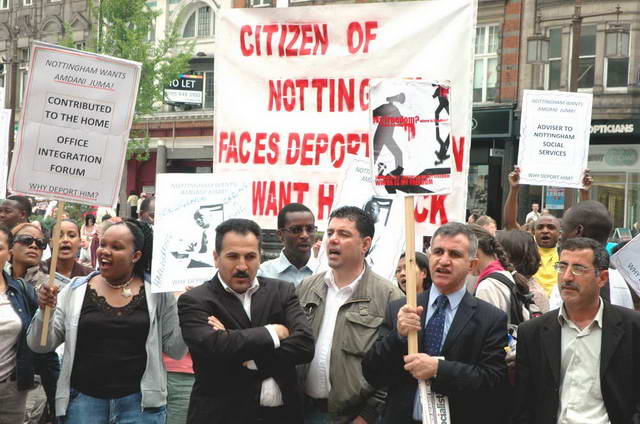 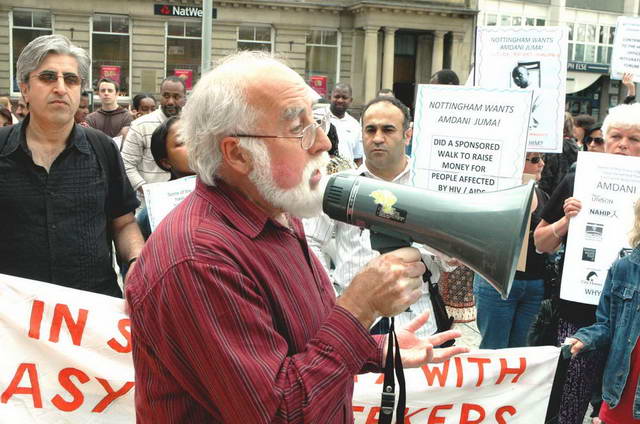 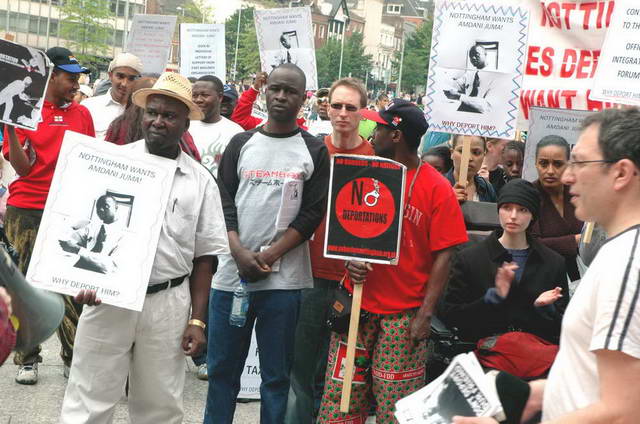 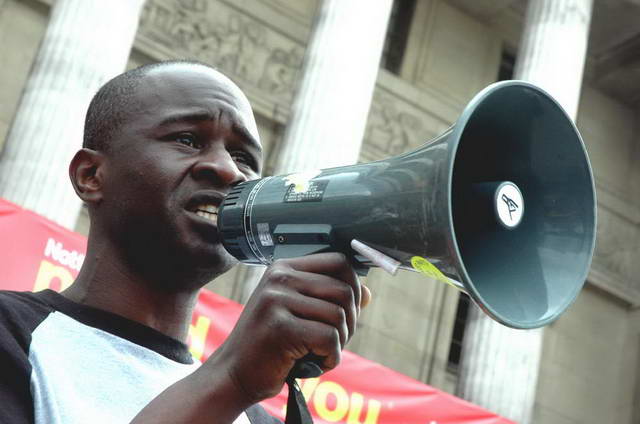 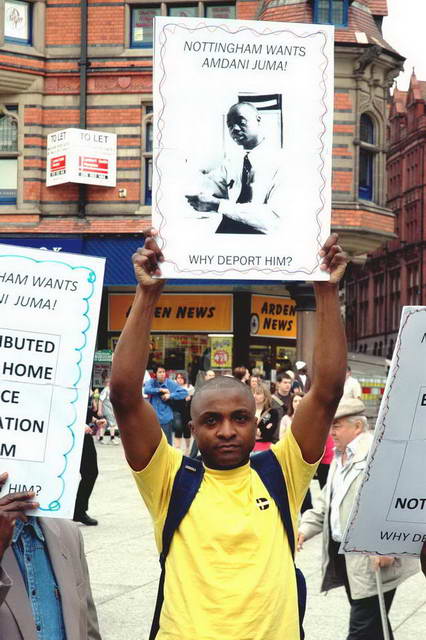 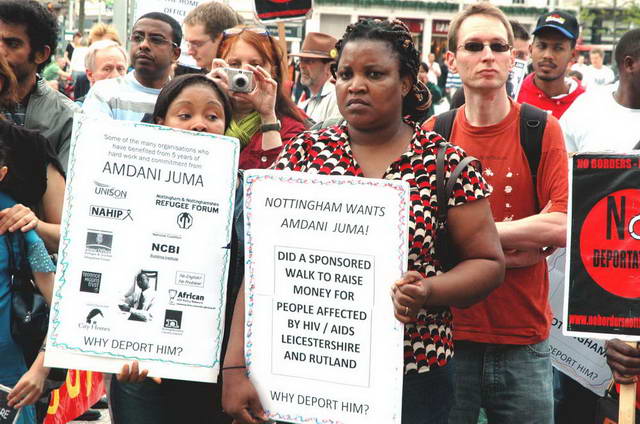 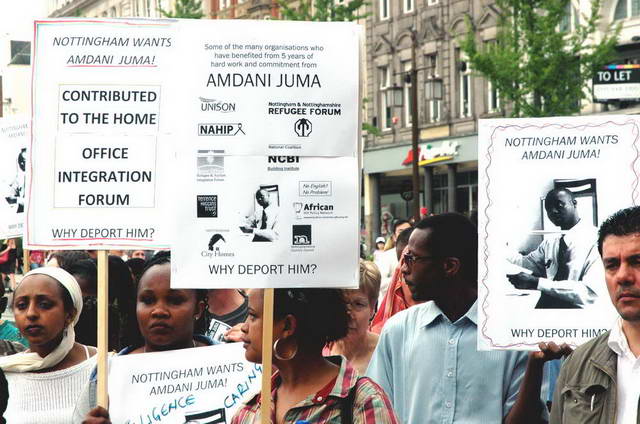 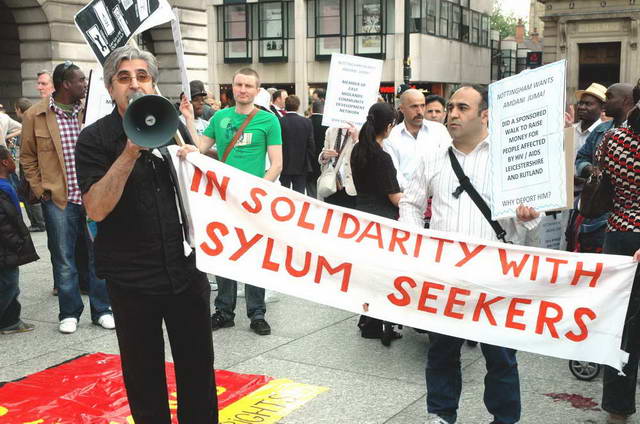 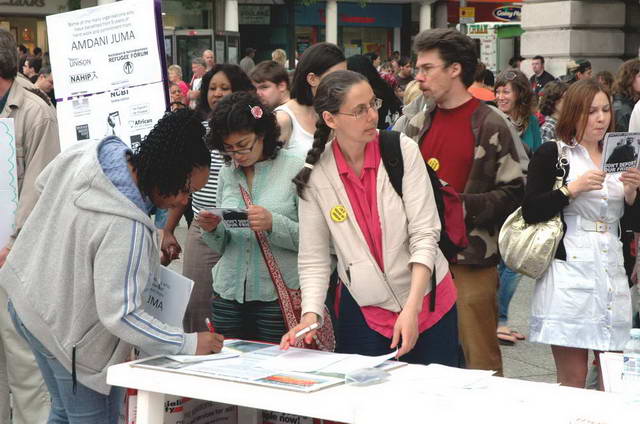 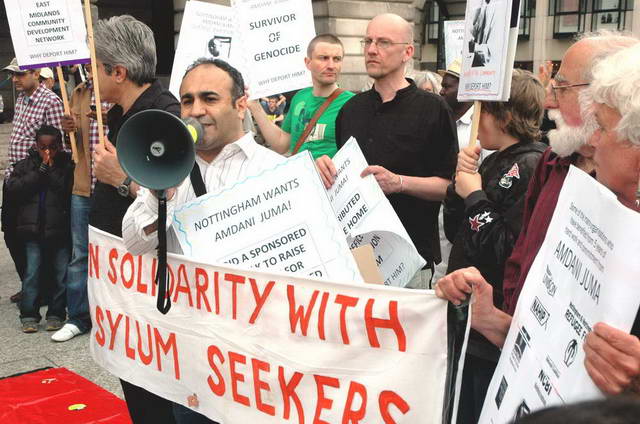 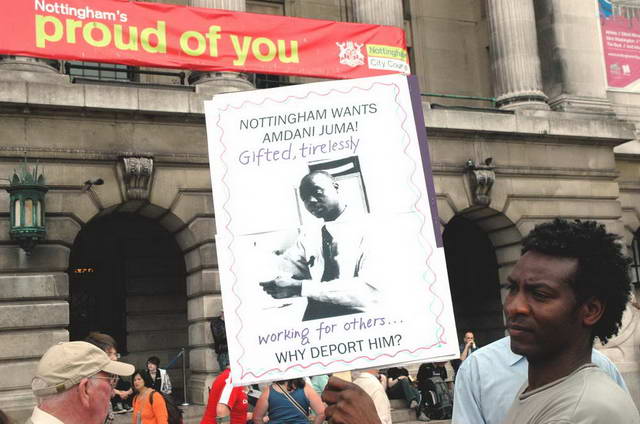 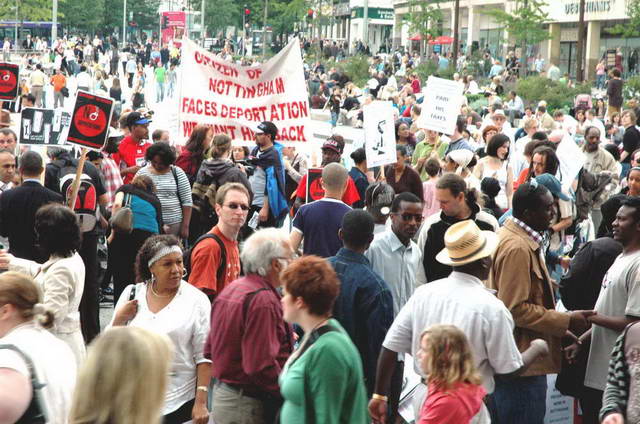 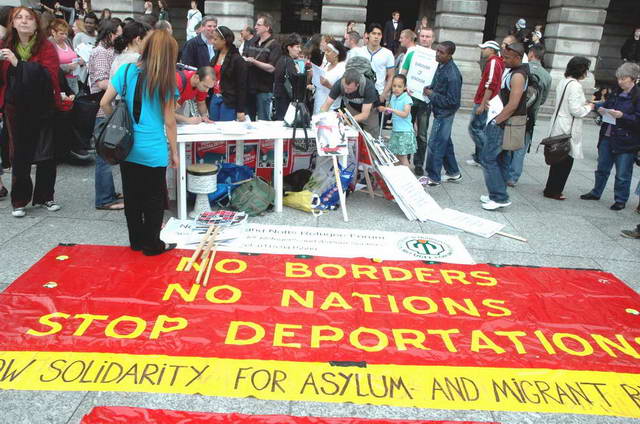 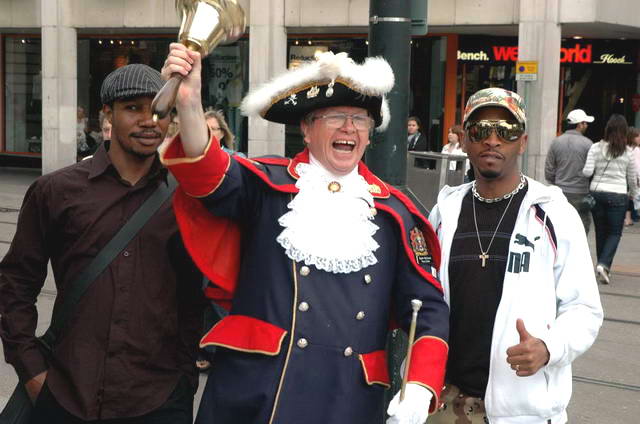 Below is the press release distributed by the Friends of Amdani Juma following his detention at Loughborough reporting centre and news that he is to be deported on Wednesday 4th June on Kenya Airways flight KQ101 (Terminal 4, Heathrow).

In support, there was a well attended demonstration on Saturday 30th May, to highlight his case. Obviously, pressure needs to be maintained and thus there is another demonstration in the Market Square, on Monday 2nd June, from 5pm

Amdani Juma, a refugee HIV prevention and community worker in Nottingham, was detained by the immigration authorities today, Friday 30th May 2008. He is currently awaiting removal to Burundi. The removal date has been set for just four days time, Wednesday June 4th at 8pm. He is being detained in Campsfield Detention Centre and will be taken to the Immigration Removal Centre near Doncaster tomorrow to await removal from Heathrow.

Friends of Amdani were shocked and distressed by the news of his detention. Amdani is a popular, active and enormously well-respected refugee community worker in Nottingham, with a particular interest in HIV prevention work.

Amdani is a Burundian national. In 2003, he was granted 3 years Humanitarian Protection but his later application for Indefinite Leave to Remain was turned down. A further application for discretion by the Home Office has also just been refused. Given his track record in Nottingham, Amdani should be regarded as prime candidate for a positive discretionary decision.

Amdani is a torture survivor and a pro-democracy activist, who escaped death on more than one occasion. He has no immediate family left in Burundi. Amdani’s cousin, brother and sister have all been given Leave to Remain in the UK or the Netherlands. Human Rights organisations and the UN have reported ongoing human rights abuses in Burundi, including harassment and torture.

"I am not aware of any refugee who has made the contribution to the city and its communities comparable to that made by Mr Juma. He is an outstanding asset. Removing him from the UK would leave Nottingham (and beyond) much the poorer. There is no one, particularly within the AIDS / HIV field who could replace the work he does."

A spokesperson for the Friends of Amdani / NNRF said:

"He turned up to sign on and was detained without any warning with just the clothes he stood up in. He wasn’t even allowed to say goodbye to his friends who were waiting for him outside the signing centre. Amdani is an exemplary citizen and a truly good person. We want him to stay in Nottingham."

1. Amdani arrived in the UK in 2003 and was granted Humanitarian Protection.

2. He originally left Burundi following the ethnic conflict in that country and was resettled by the UN. He later attempted to settle back in Burundi but had to leave because his life was in danger.

3. On arriving in Nottingham, he started working at the Nottingham and Notts Refugee Forum as a volunteer. Later he was employed by the NNRF as a member of their team helping refugees settle into new tenancies.

4. He has also been a key member of the African refugee community in Nottingham. As Chair of the Nottingham African Support initiative he organised training on employability and capacity building for local communities, and was involved in setting up a supplementary Saturday school for African children to support their English and Maths. He has developed close links with a number of statutory and voluntary bodies, including the Nottingham City Council. He has participated in the City Council BME Forum and as a refugee representative on the Nottingham City Homes Tenants Forum.

5. It is in his work on HIV prevention that Amdani has made a particular contribution to the city. He has been tireless in his HIV educational work, understanding the particular sensitivities and difficulties around the HIV issue amongst African communities. His experience, five languages, and wide networks have made him a unique presence in the field of HIV Prevention work in the city. Amdani was recently appointed to a project funded by the Terence Higgins Trust.

6. In 2005, the manager of the then East Midlands Consortium for Asylum and Refugee Services (EMCARS) recommended that Amdani apply to serve on the National Refugee Integration Forum. He joined the National Forum’s Community and Media sub-group. Here he was involved in ensuring that information was disseminated to refugee groups.

7. Amdani has been supported by his local MP, Alan Simpson; Jon Collins, Leader of Nottingham City Council and other MPs. At his appeal against the Home Office refusal of his Indefinite Leave to Remain, over 80 organisations wrote letters of support for Amdani, including community groups, trade unions, churches, health promotion groups.

8. For an Evening Post report on Amdani Juma go to www.thisisnottingham.co.uk Search this site for Amdani Juma.