Since his detention on friday 30th May, this is the second demonstration in his support in the Market Square. 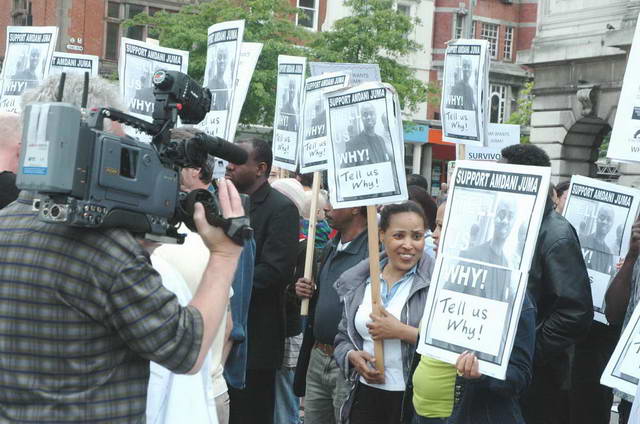 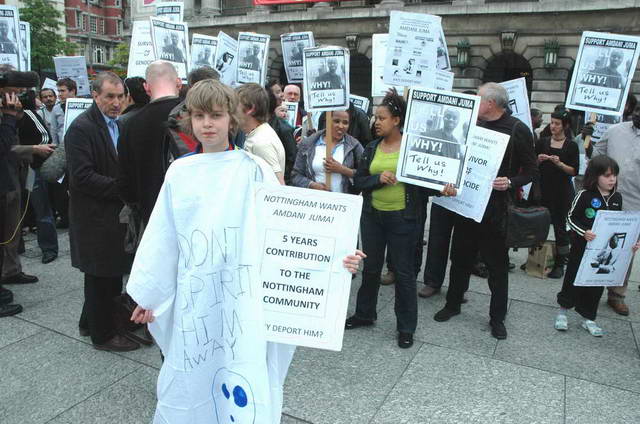 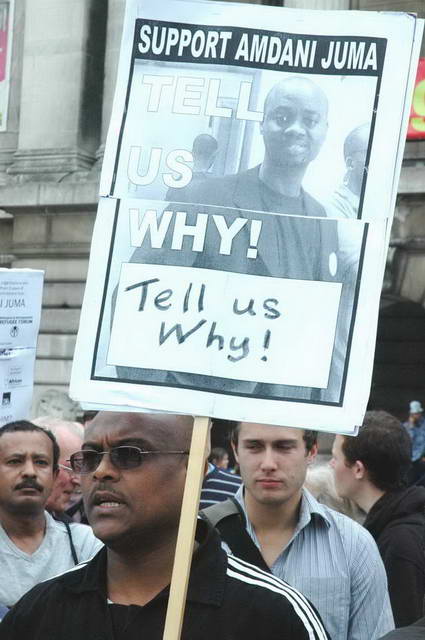 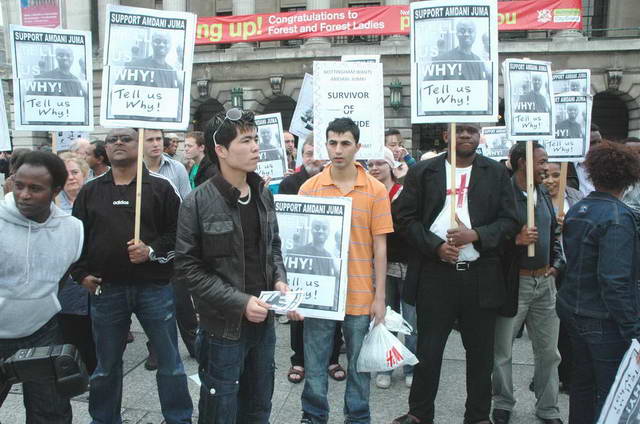 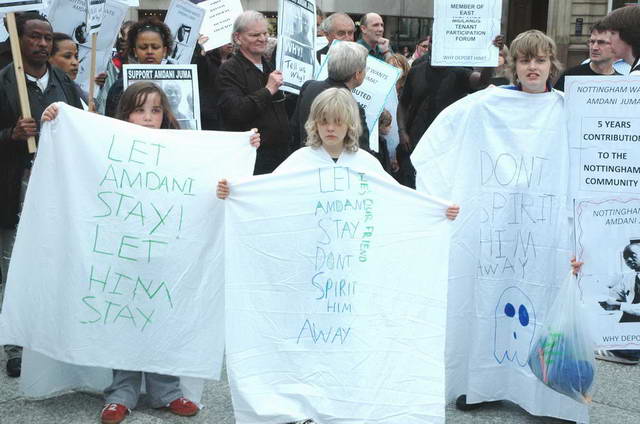 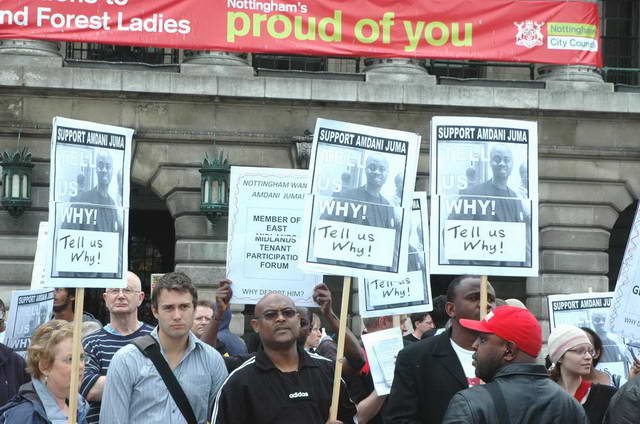 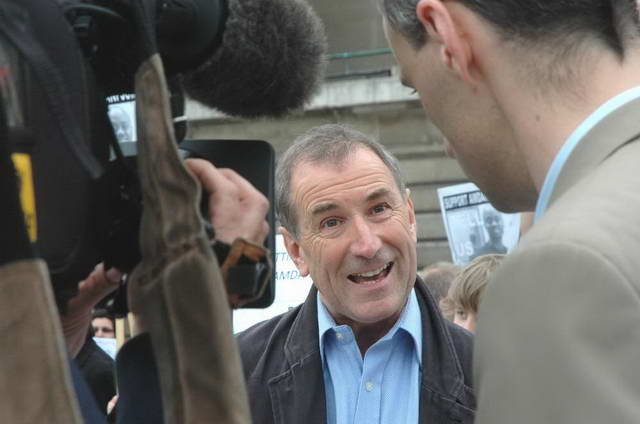 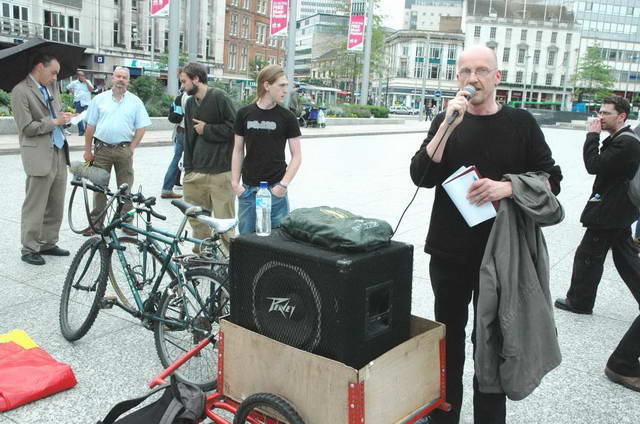 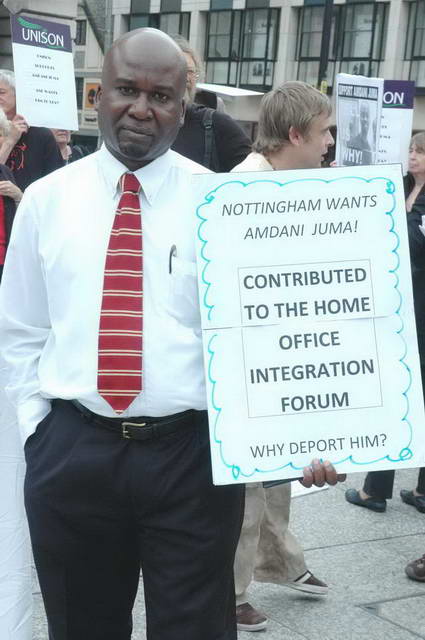 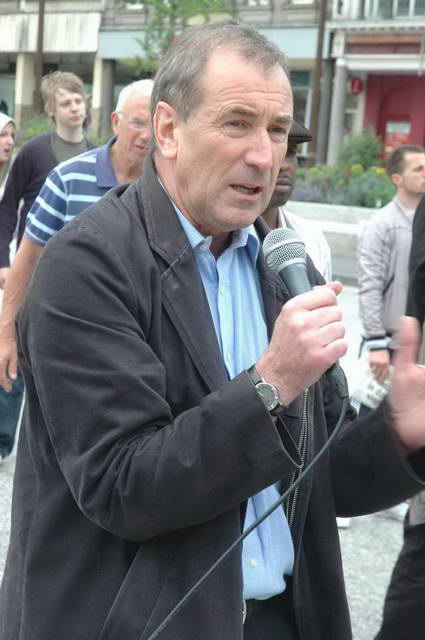 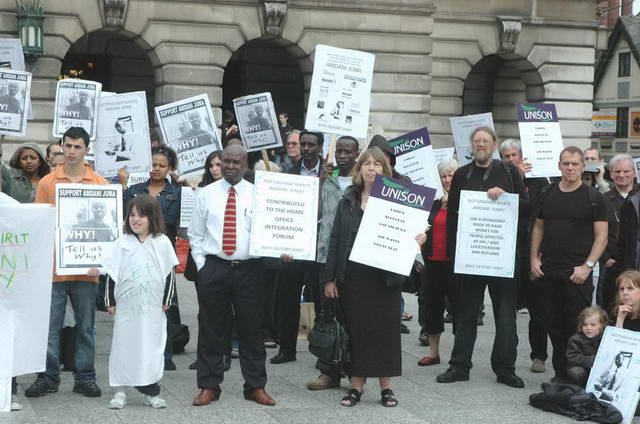 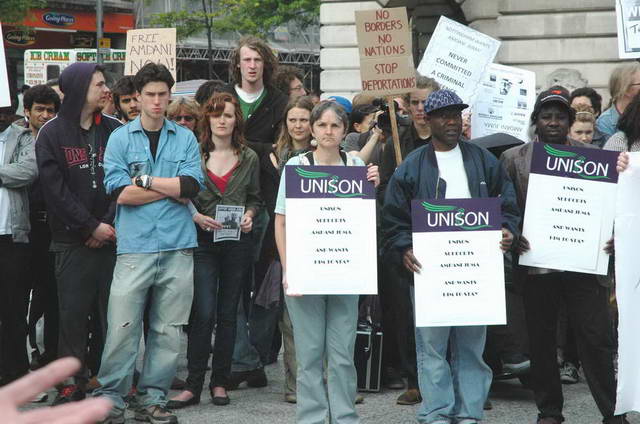 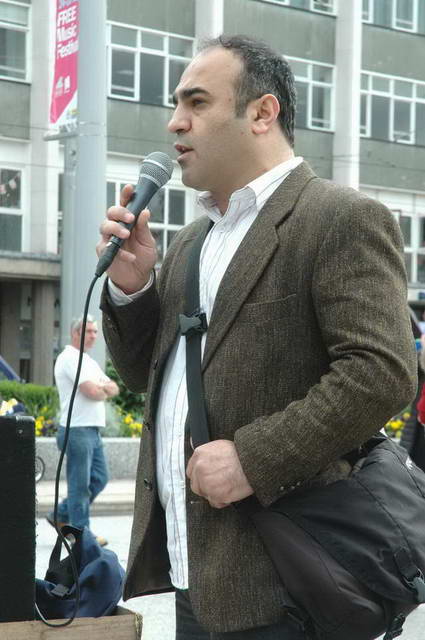 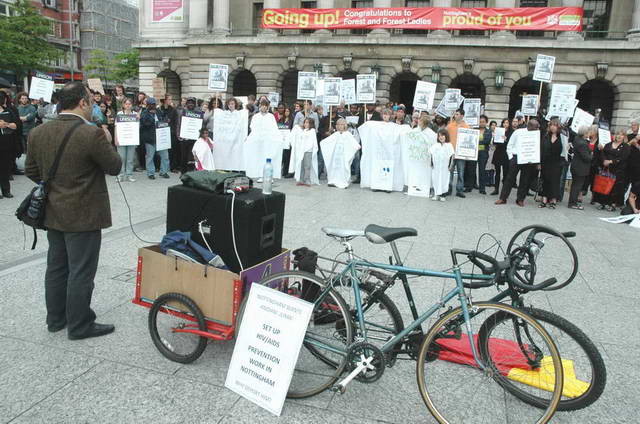 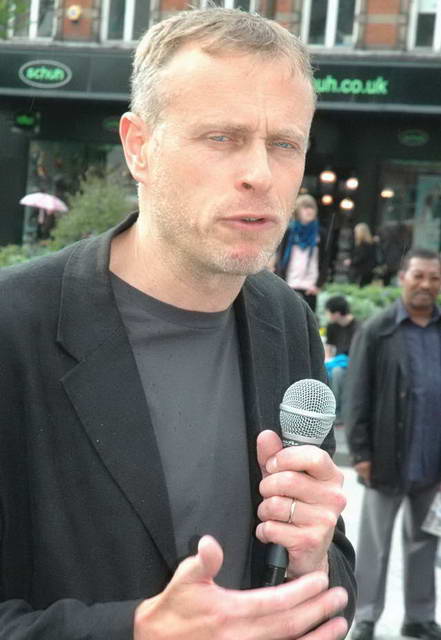 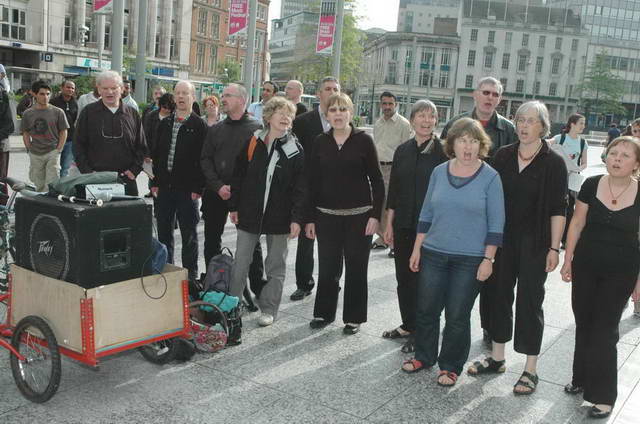 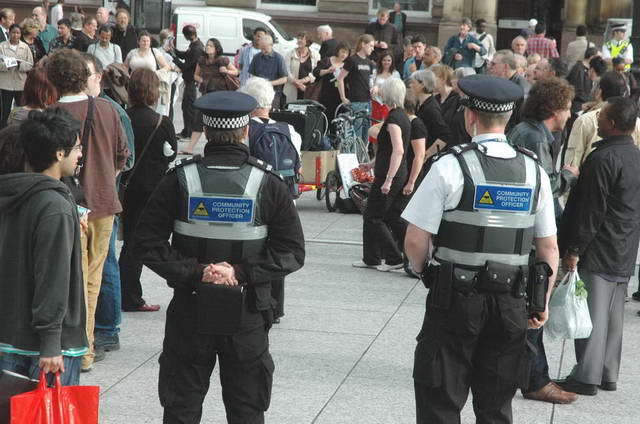 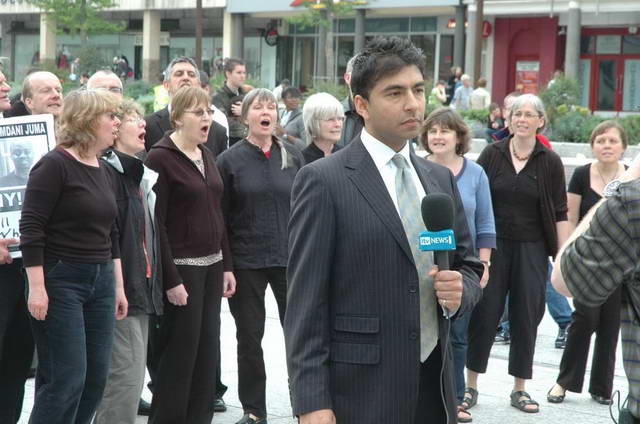 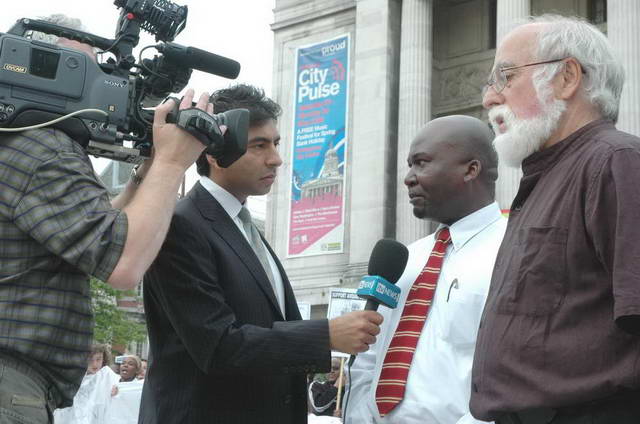 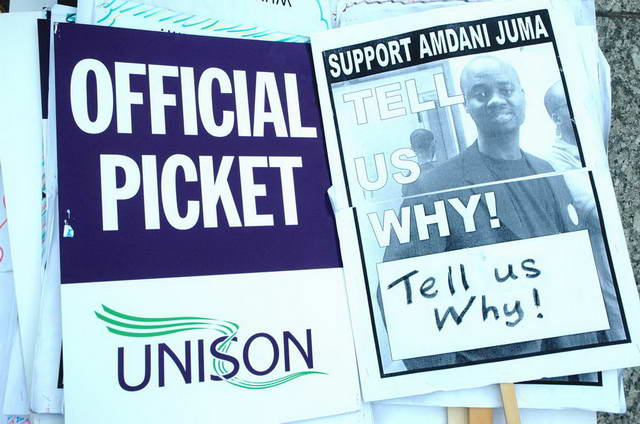 Since his detention on friday 30th May, this is the second demonstration in his support in the Market Square.

Pressure mounts on Liam Byrne, Minister of State for Immigration at the Home Office, as MP and Council leader speak out at community rally.

On 2nd June 5pm 250 people gathered in Nottingham City Centre in support of Amdani Juma. Nottingham MP Alan Simpson spoke of Amdani’s irreplaceable contribution to AIDS and HIV prevention work in the City and Council leader Jon Collins praised Amdani’s contribution to the local community over the past 5 years. During the 1 hour rally, 450 Nottingham residents signed the petition and over 550 people have signed the online petition in the past 48 hours. Total signatures since Amdani’s detention last Friday is 1,600.

The Nottingham Community is calling for an explanation for the decisions that have led to Amdani’s detention and threatened removal to Burundi on 4th June. Their message to Liam Byrne is: TELL US WHY

TELL US WHY Amdani has been refused on the grounds that allowing him to stay
was not in the “interests of the community” when overwhelming evidence from the community showed it was.

TELL US WHY the impact of Amdani’s detention on refugees socially and mentally is
not being considered. What message does his detention send to other refugees?

“I have worked with others to tell them to learn English, find work, look after each other, integrate with your neighbour - drink tea and eat together.

“I have added English to my spoken and written languages, carried out paid and voluntary work, campaigned for integration, involved myself in community groups, sustained my tenancy, always operated within the law…if I am not safe, who is safe?”

To date there has been no comment from Liam Byrne or the Home Office.

In his determination of Amdani Juma’s appeal hearing on 28 November 2007, the adjudicator had to determine whether the decision to remove the appellant was proportionate and had to strike “a fair balance between the rights of the individual and the interests of the community” in doing this he made no reference or acknowledgement of any of the overwhelming evidence presented from community members and organizations in court (para 23 to 29 of determination and reasons) and concluded that it was not in the public interest to allow Amdani Juma to stay.

http://www.petitiononline.com/amdani/petition.html contains many testimonials from the Nottingham community, and has over 550 signatures so far.

Other speakers at the rally included Patsy Brand, chair of Nottingham and Nottinghamshire Refugee Forum and Mick Mason from the Terrence Higgins Trust.

Terrence Higgins Trust is the leading and largest HIV and sexual health charity in the UK and Amdani Juma’s employer. 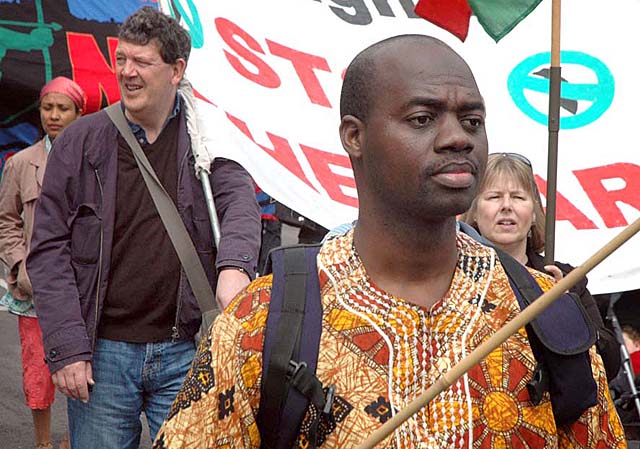 
Less than 27 hours before Amdani Juma's scheduled removal from the UK, Friends of Amdani Juma were informed that his removal has been delayed by 6 days to Tuesday 10th June.

Friends were told the news this evening as an hourly countdown to his departure time was being launched at a Nottingham City Centre church. No reason for the postponement has been provided.

The online petition now stands at 1,000 bringing the total number of signatures in support of Amdani to over 2,000.

A spokesperson for Friends of Amdani said:

“It gives us more time but we can't be complacent, we need to keep the pressure up. We are also concerned about the effects of all this on Amdani's health. He has the threat of removal hanging over him and he has now been in detention for 4 days. He needs to be with his friends

http://www.petitiononline.com/amdani/petition.html contains many testimonials from the Nottingham community, and has 1,000 signatures.