A visit to the Opencast Squat

I decided to take a trip to Shipley today to see how the new residents of Prospect farm were settling in. 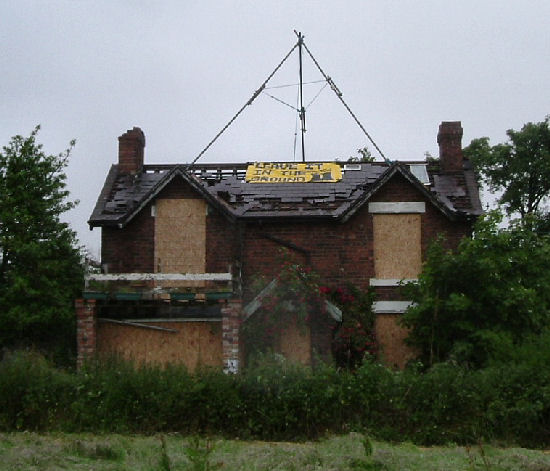 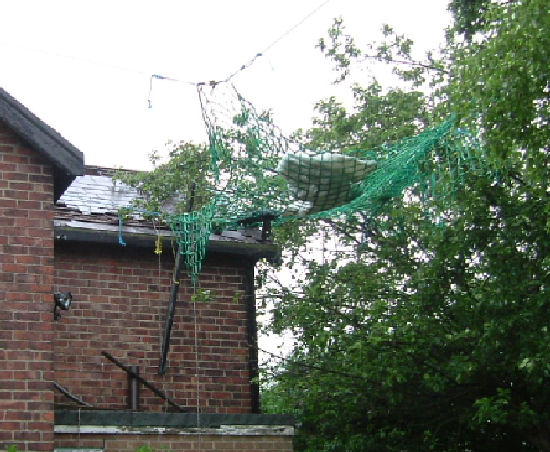 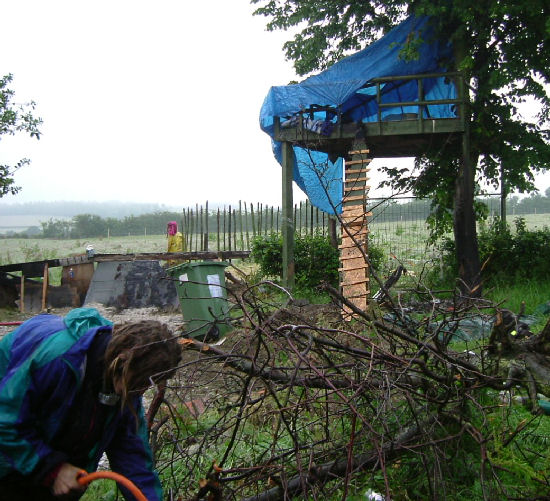 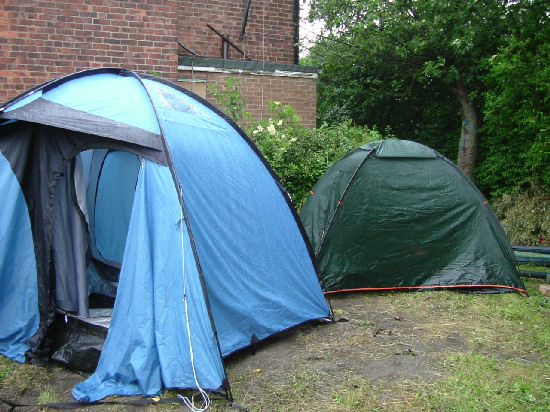 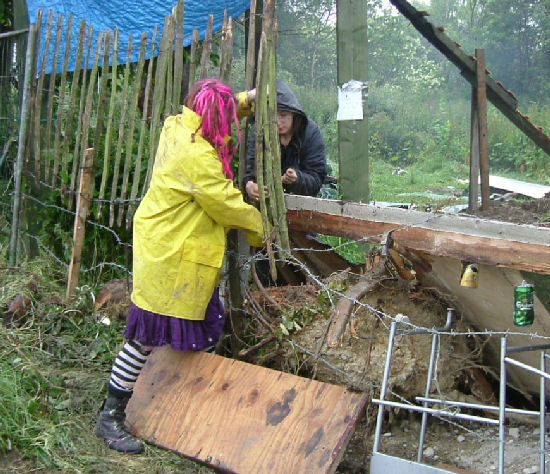 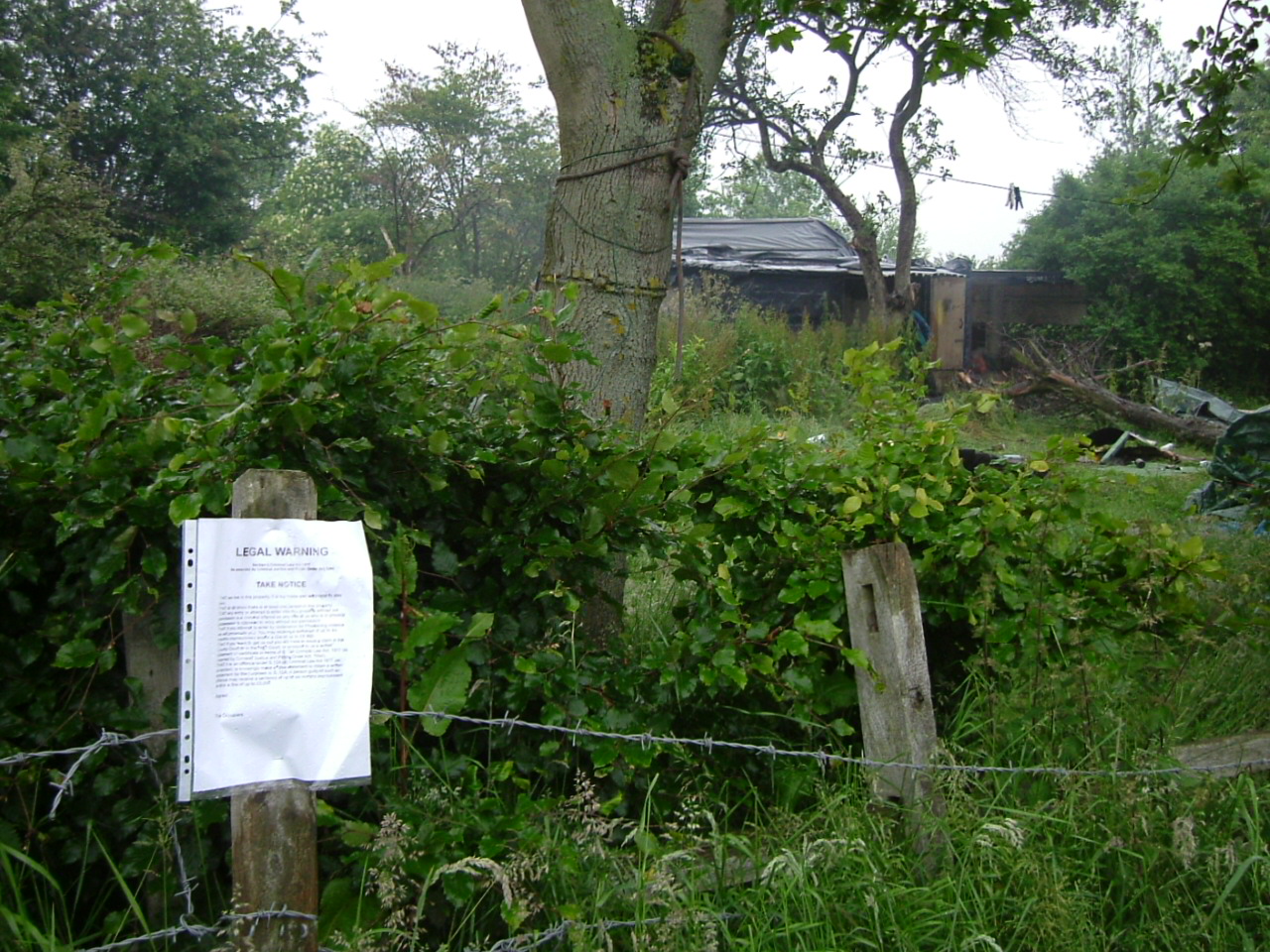 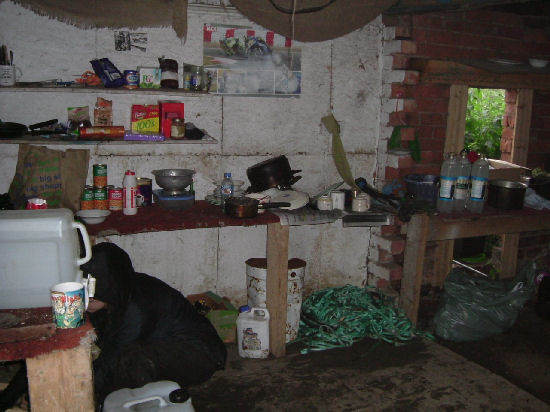 Just to recap the story so far. In the early hours of last Wednesday morning a group of caring individuals took possession of a building on the site of UK Coals planned new open cast site in Derbyshire. There aim is to protest/prevent the countryside and wider environment being devastated by the extraction and burning of the dirtiest fossil fuel.

As if we needed any reminding of the climate chaos coal burning contributes to, when I arrived on Saturday (21st June!) it was wet and drizzly and the forecast was for storms.

But the rain had not dampened the spirits of the crew now living at Prospect Farm (now re-christened Bodge farm). While they were still busy with all those jobs that need doing when you move into a new home they had already achieved a great deal and the place was very homely. A well-stocked kitchen was set up and a welcoming open fire means there is always a kettle on the go.

To the sounds of acoustic guitar from one of the tree-houses I watched a couple of people fixing fencing and looked up to admire the suspended cargo netting between the trees.

There have been other visitors coming to show their support including three generations of the family who used to live in the house before UK Coal kicked them out.

I was delayed on leaving as a large van full of provisions had just arrived and needed unloading. This had been spontaneously arranged and paid for by locals and included just about everything you could think of from tinned beans to cotton buds, fresh veg to bottled water.


Please get along there and support them, it’s a lovely location and the squat/camp has a great feel.

But get along there because at some point we have just got to draw a line. For all our futures and for generations to come, leave it in the ground.

Thanks for the photos. Hope to make it up top the site soonish..

"make it on top of the site soonish"?!

Erm ... what do you mean notter? This story is and has been on top of the site since las Wednesday 18th of June.

what i meant to write was:

"As if we needed any reminding of the climate chaos coal burning contributes to, when I arrived on Saturday (21st June!) it was wet and drizzly and the forecast was for storms."

Seriously, reduce environmental destruction and all, great, but that sentence is asinine. Saying something so ridiculous reduces the credibility of the entire article.

Not in the spirt of what this is all about

Oh dear Mr weatherman, did you loose your sense of humour when you swallowed that dictionary? How about you get up there and write something to support the camp, armchair sideswiping is not what Indymedia is all about. Nuff said. 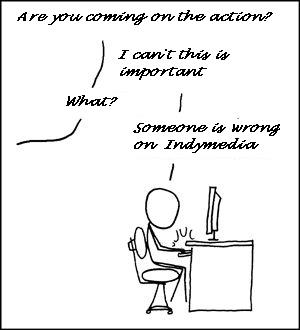