Just two weeks after the Police Service of Northern Ireland (PSNI) released a report by their Historical Enquiries Team (HET) on the McGurk’s Bar Bombing in 1971, Robert McClenaghan, grandson of Phillip Garry, one of the victims, visited Nottingham to speak at the ICC. He was representing An Fhirinne (The Truth), an organisation of relatives of people murdered by loyalist paramilitaries where there is evidence of collusion between the paramilitaries and British state forces. An Fhirinne and other relatives’ organisations are calling for an Independent International Truth Commission into the slaughter of their loved ones. They believe that a British government inquiry could not possibly be independent, and neither could a government of Ireland one, as they have done little to uncover the truth of killings in the twenty six counties.

Robert visited Nottingham as part of a tour of four English cities as a guest of the Troops Out Movement (TOM), the British- based organisation which campaigns for British withdrawal from Ireland. He showed a very harrowing video of relatives speaking of their lost loved ones. It showed to people in England the reality of what was done in their name. 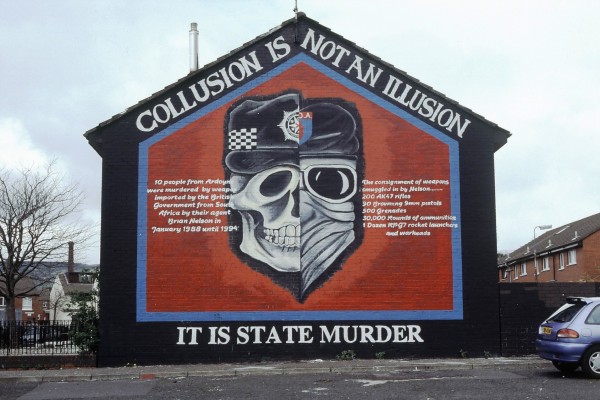 Expressing no confidence in British investigative procedure Robert McClenaghan said: “The HET is about the police investigating the police. Some of the most senior members of HET are former members of the original Stevens Inquiry team, who only managed to produce 20 pages out of a 20,000-page report. A report into the McGurk’s bombing was published by the HET two weeks ago. It is, as we suspected, a review of existing material rather than a new investigation."

Robert spoke of many of the collusion cases and made clear the relatives demands: "We are not talking prosecutions and revenge here, we want the justice of truth. Following any trauma, health professionals and counsellors speak of those affected needing closure. How can our families get closure without truth?"

The tour started in the North West with Robert speaking in Liverpool and Manchester. In Manchester he presented a video and written material produced by An Fhirinne and Relatives for Justice to the Irish archive at the Working Class Movement Library. He went on to lay flowers at the Manchester Martyrs’ monument and at their grave. He continued on to the Midlands and spoke at meetings in Nottingham and Birmingham

At the public meeting in Birmingham’s Council House, Mary Pearson, secretary of the Troops Out Movement, pointed out that the atrocities were carried out in the name of the people of Britain, who had in fact paid the wages of the those who had colluded with the murderers. She said that there was a responsibility on everyone there and everyone who knew about the collusion to use the moving video to raise the issue in communities, trades unions and with the political parties and representatives. She referred to the government’s reluctance to hold inquiries because of cost and pointed out that cover-ups cost millions, the truth costs nothing.

The Birmingham meeting was addressed by Louise Kilbride and Maureen Russell of the Telling Tales Theatre Group. They spoke on the murder of Patrick Shanaghan by loyalists with security force collusion, about which they have written and performed a play "Stepping Out of Line". They performed songs from the play at the meeting.

In Birmingham Robert met Irish community representatives and was interviewed live for a full hour on the Unity FM Community Radio, and by the Harp free newspaper serving the Irish community. He also met members of the Asian community, one of which offered to put leaflets in his shop.

The tour culminated in Liverpool on Saturday 28th June at the James Larkin Society’s march and rally. The event was to commemorate the 100 years of the Irish Transport & General Workers Union (now SIPTU). Robert was the main speaker and gave a strong speech on Larkin as well as the demand for truth and justice on collusion.