On Wednesday 16 and Thursday 17 July, local government workers in Unison and Unite took part in a 48 hour strike. The action was in response to the "final" 2.45% pay offer made by the employers (which, given the current rate of inflation, constitutes a real terms pay cut) and part of a wider struggle being waged against the public sector against what the government call "pay restraint."

In Nottinghamshire there were picket lines at various council offices and 82 schools were shut as caretakers, teaching assistants, admin staff and midday supervisors walked out. There was a march from the Forest Recreation ground to a rally in the Market Square on the first of the two days. 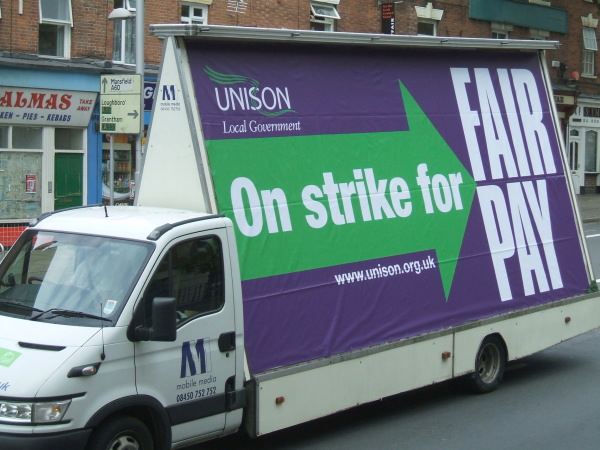 As seems to have been the case across the country, support for the strike was patchy. Reports indicate that Ashfield District Council was largely closed, whereas Nottinghamshire County council saw most staff at work and could only muster a handful of pickets.

Much of the media focus was on school closures and rubbish collection. There was a concerted effort by strikers to convince refuse collectors based at Eastcroft depot not to go into work. Unfortunately, many of them are agency workers who need to stay onside with management if they want to get a permanent job or members of the GMB who have endorsed the pay offer and rejected strike action. As such very few of them actually joined the pickets (a city council spokesman claimed that only one refuse lorry had failed to leave its depot on the first day) and there were a number of heated exchanges with one apparently fairly serious confrontation.

With the employers intransigent, it is unlikely that this will be the last such industrial action, although the next step remains unclear. With teachers, further education lecturers, health workers and civil servants also engaged in struggles against low public sector pay offers, there is considerable scope for building potentially powerful alliances.