While the BNP's notorious Red, White & Blue bash is this weekend set to benefit from the protection of hundreds of thousands of pounds' worth of policing, a simultaneous event promoting racial unity in Derby has been cancelled - due to direct pressure from the Police. 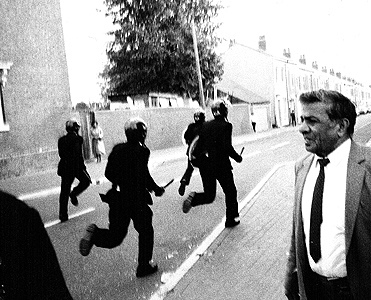 The free 'Love Music Hate Racism' event was scheduled to take place on the evening of Saturday 16th August at a community centre near the West End of Derby city, and was to feature a diverse showcase of artists such as Tinie Tempah, Wretch 32, Malik and Young Kof. However, organisers announced yesterday that the venue decided to cancel the event after being contacted by the police.

The police have not been asked to comment on whether this strategy is due to institutional racism or an attempt to conserve policing resources following recent large expenditure on persecuting the environmental left movement.

Either way, with forces from around the country being deploid to ultimately allow the far right to continue plotting to exploit the unfolding domestic economic, climate and energy crises, those seeking racially unified approaches appear in this case to be actively discouraged by a state police force again involved in unfavourable political policing.

Why does this make the police racist? Until we know why the event has been cancelled it seems unfair to jump to conclusions. Isn't that photo from the 70s?

The club directly recieved warnings from police, though this event is more

likely to bring the diverse communities together in self defence, so its arguable police here were being slightly racist. They should shut down & stop war mongers currently sending young people to kill even younger people all over the world for oil.
Is it racism? biker festivals & traveller festivals have been banned just as much, anything that corporate state feels it cant control & order for "peace" whilst some in it are happily bombing civilians.

You won't get the same policing that you had for the poor climate campers last week thats for sure. I am not necessarilly talking about the searching of people but some of the confiscations were a bit OTT, i'm talking about the mas provocations like making people walk about a mile or so from the site with food boxs, invading the site for no real reason or nicking someone for having a passport, stupid childish waste of time and money policing.

No it will be"Hello Mr Griffin, your people are waiting".

Pic is from Handsworth riots 1985.

police were racist at camp too

non-white climate campers were asked about there immigration status

racist to the core from toe to tip - makes it very useful leverage.

I just noticed something whilst scouring the British sunday papers - Sir Ian Blair is under investigation by the Home Office and about to face charges that he's a racist :-

[....."Sir Ian Blair, the Metropolitan police commissioner, allegedly bugged Britain's most senior Asian policeman, according to leaked Scotland Yard documents. The papers allege Tarique Ghaffur, an assistant commissioner, had more than 300 of his telephone calls tapped in an elaborate operation overseen directly by Blair. He was also photographed and taped attending more than 30 meetings with a fellow officer at restaurants and cafes in west London. Ghaffur's lawyers are preparing this week to announce formal legal proceedings for race discrimination against Blair, who was placed under formal investigation by the Home Office this month......"]
that's today's Telegraph :

all top order you might think. We've all wanted rid of Blair I'm sure for a long time. I even wrote it out in characterestic prose following the "summer of Terror UK '05", arguing that a Blair resignation would go down well in far off places where they'd think he was a close relation of Tony.

it's a similar tactic to being questioned over stealing your own credit cards it's a way to intimidate you to give your details to the police and it's not just non-whites it's anyone they suspect of not being British, a slightly foreign accent is what they look for

Anyopne with any sense or experience knows that the police are right wing and institutionally racist, we all know that, even before the Stephan Lawrence case. I remember one mobilization againstt he BNP in 2001 I went to, the police formed a line holding back the anti-fascists, pushing people around, filming in people's faces and taking close up photographs, treating us like scum, their attitude was appalling, and yet the Fash were allowed to walk around freely without any form of intimidation at all, no photos, no filming, no agression, nothing.
I know people who went ot the climate camp and the police were rough, confiscating stuff, spreading rumours of dysentry. Anyone with similar experiences know how shitty the police can be, as though they are looking to provoke a reaction, even at otherwise peaceful protests