One cause, one aim, why can't we all join together instead of the infighting and bickering that seems to affect the Anti-fascist movement every time we mobalise.
More than 500 anti-fascist protesters have descended on a village to protest against the BNP's annual festival.
(Advertisement)

Demonstrators from Unite Against Fascism, the TUC and Unison were flanked by 150 police officers as they marched through the village of Codnor, Derbyshire, to rally against the BNP as they took part in the Red, White and Blue Festival.

Waving placards bearing slogans such as "Jobs And Homes Not Racism" and "BNP Is A Nazi Party", the protesters walked down the village's main high street to a farmer's field where the BNP was holding its festival.

The protesters will be addressed by Bob Crow, general secretary of the Rail, Maritime and Transport Union and the MP from Amber Village, Judy Mallabar.

But there were a number of hold-ups as demonstrators from the various groups argued among themselves about who should be at the front of the march. (WHAT!!!)

The BNP said about 4,000 of its members were attending this weekend's festival, which will include speeches by the party's leader Nick Griffin and far-right speakers from Europe, namely Petra Edelmannova, who is the leader of the Nationalist Party in the Czech Republic.

Earlier in the year, police had objected to two requests by the festival's organisers to serve alcohol at the event.

Amber Valley Borough Council agreed with their objections at a number of licensing committee meetings.

The number of people who could take part in the rally was limited to 700, while only 30 anti-fascist protesters will be allowed on to an agreed site next to the festival itself.

One cause, one movement

Stupidity thats the key to it all...

"BNP Is A Nazi Party" answers your question nicely.

Around 8 antifa have been arrrested after a clash with riot police - one cop said to be injured "slightly."

By all accounts, except from the fantasist BNP, the festival was very small indeed, and since it pissed it down on Saturday night I for one had sweet dreams at the thought of Griffin ending up on his arse in a field today and he tries to rally his faithful.

The gathering and rally in Codnor and march to end of the Codnor-Denby lane was not the only thing happening on Saturday. Disruption at various points away from rally site, and nearer the festival site was the order of the day, obviously focused on giving the fascists a hard time getting to festival & not aimed at fighting with police as mainsteam media has reported. It was very pleasing that the cops were caught unawares in spite of the number of police assigned to the task of protecting the fascists. But as tends to happen if you take direct action, riot police come in to 'quell' things like roadblocks extremely violently tooled up with batons. In these cases self-defence, as well as running to escape serious injury, is often necessary.

The people who took the direct action, which meant that opposition to the RWB was well reported in the media and the police had a severe public order headache should be proud of themselves. It seemed the chief cop's only response to any direct action was to order in a team of riot cops to beat people up as violently as possible and arrest them, something we see time and time again but usually only reported as a bad thing if it happens in more repressive countries like Burma. As there were a lot of arrests all our support will surely be needed if the cops try to make public order offences stick.

If Stop the BNP Red White & Blue Festival means anything, it means stopping the festival happening not only marching and shouting about it. It's good to show support to the growing number of local people who don't want the BNP organising in their area, but at the same time the fascists already know who they are, so it's up to anti-fascists, local or otherwise to actively stop them organising wherever they are. The main reason the booze & music events license was not given to BNP this year (unlike 2007) was the threat of disorder by anti-fascists which tells us even more disruption is needed if they try it again next year.

And let's not kid ourselves. The whole system is in need of change, not a vote for Labour rather than BNP. The Labour government, with enthusiastic opposition support, has done more than anyone to increase the level of racism in Britain with its new border and immigration policies, locking people up in detention centres etc. In Italy it's even worse at the moment with the ruling party openly attacking immigrants, Roma people in particular. So it's only a small step from detention and deportation (organised by Labour Party) to calling for complete expulsion/repatriation which fascists in Britain in Italy want -

Police violence against a roadblock - in depth mainsteam press report

Here is a link to a press article clearly explaining that the cops were first to use violence when they came to 'quell' a roadblock that was hurting no one and clearly intended to prevent fascists from going to their racist 'festival'. In it you will read from the mouth of farmer whose yard was on the junction, "Then the police arrived with batons and pushed them down the road and they leapt over the fence and into other fields to get away from them." Only after did anyone have to defend themselves according to the second eye-witness. This is not to say that police should never be attacked if they are defending fascists, but on this occasion it's the police who should arrest themselves for assault. 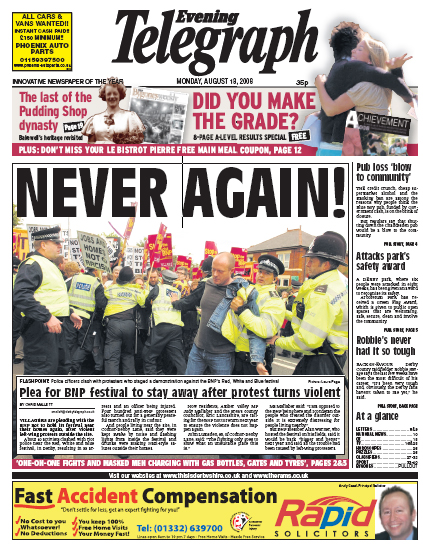 ... showing clearly that it's the direct action that will get RWB stopped.