According to Human Rights Watch, the Georgian military "used indiscriminate and disproportionate force resulting in civilian deaths in South Ossetia". However, that hasn't stopped these war criminals from becoming customers of Heckler & Koch! 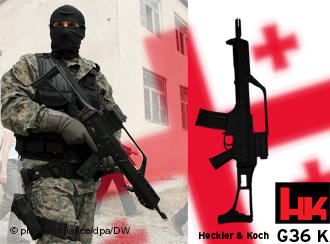 When Heckler & Koch applied for permission to supply 230 assault rifles to Georgia, the German government said no, on the grounds that Georgia is involved in a war. But as any successful arms company knows well, there are many ways to get around these obstacles, and sure enough, the German-made weapons showed up in Georgia anyway!

To quote the head of BITS, "It doesn't matter how these weapons landed in Georgia; whether they were illegally exported from Germany, whether a licensed exporter violated German laws or whether a recipient of the weapons who acquired them legally in Germany, further exported them."

The point is, that's just how the arms industry works.

And which department of Heckler & Koch is responsible for sales to Georgia and other non-NATO countries? Check the corporate website: It's Heckler & Koch GB, based at Unit 3, Easter Park, Lenton Lane, Nottingham NG7 2PX.

So next time you see pictures of wretched South Ossetian civilians clutching the bodies of their loved ones amid the shredded ruins of their homes, just remember: a company in Nottingham helped to make that happen.

also of interest to Heckler and Koch history buffs, this story appeared in the Washington Post in april

Osama bin Laden flew to London in 1986 to help negotiate the purchase of Russian-made surface-to-air missiles to be used by Arab fighters then battling the Soviet military in Afghanistan, according to a new book on the bin Laden family.

Bin Laden and his half brother, Salem, met several times with the contacts at the luxury Dorchester hotel in London , according to "The Bin Ladens," by journalist Steve Coll.

"Don't do any jokes with my brother," Salem is said to have told the others. "He's very religious."

The deal for Russian SA-7 missiles was arranged via "contacts" with the German arms manufacturer Heckler & Koch, through an associate of Salem bin Laden, the book says.

It suggests that payment for the weapons was made by the government of Saudi Arabia and that the weapons eventually were purchased in South America.

At the time of the weapons shipments, both the U.S. and Saudi governments were supporting Afghan and Arab forces resisting the Soviet Union's occupation of Afghanistan . But while the Reagan administration supplied Stinger missiles to the Afghans, the book says that the Afghans did not want the Americans providing such weaponry directly to Arab groups that had joined the fight, including forces organized by Osama bin Laden.

"We have made no bones about our support for the mujaheddin" fighters, Saudi Embassy spokesman Nail al-Jubeir said yesterday. "We matched the Americans dollar for dollar." But "in terms of what was bought, I really don't know," he said, adding that the Arabs eventually did receive the SA-7s.

Calls to Heckler & Koch's offices in Virginia and in Alabama were not returned.

She wants a rethink on the laws and is calling for more or clearer sentencing guidelines.

Mrs Fish is chairwoman of the Criminal Use of Firearms unit for the Association of Chief Police Officers.

She said current sentencing guidelines around the use of arms are inconsistent, set up to deal with rogue traders not people who sell guns on a mass scale.

She was speaking after the conviction of Grant Wilkinson at Reading Crown Court yesterday for turning replica sub-machine guns in to real weapons, which were later used in at least eight murders and in many other crimes throughout the country, with many concentrated in London.