On 12:30 on Monday 6th October 2008, staff and students from Nottingham Trent University together with hundreds of UCU members from all around the country held a national rally outside the Royal Concert Hall in Nottingham. 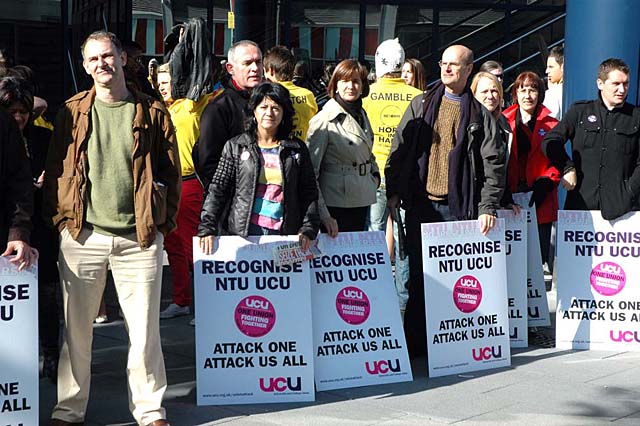 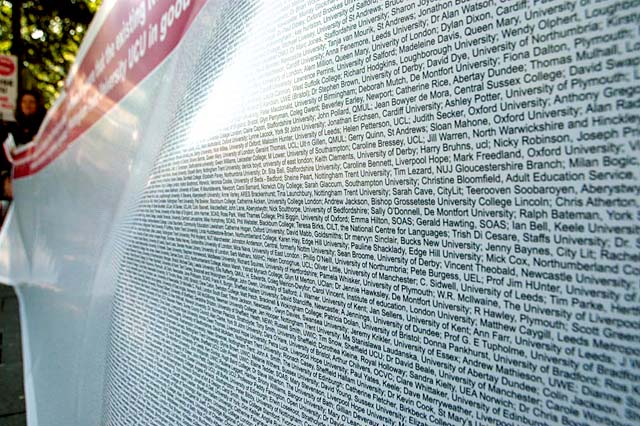 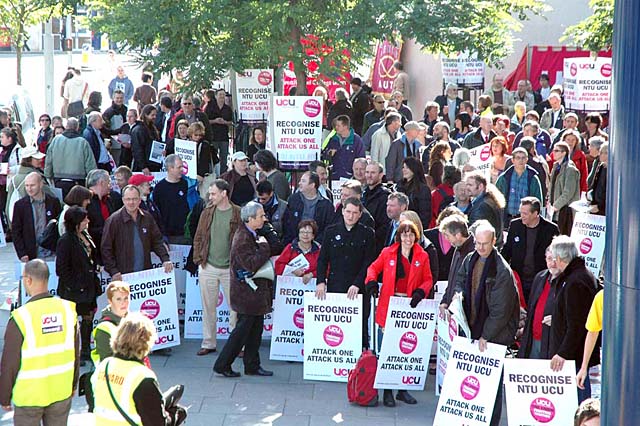 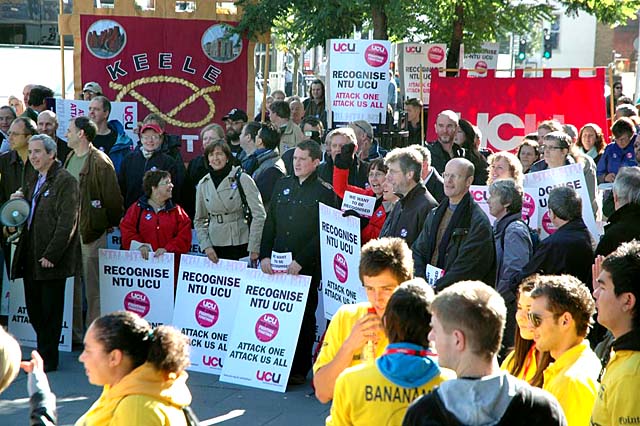 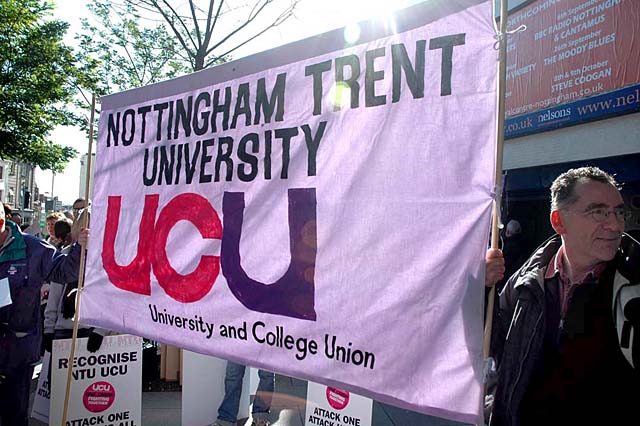 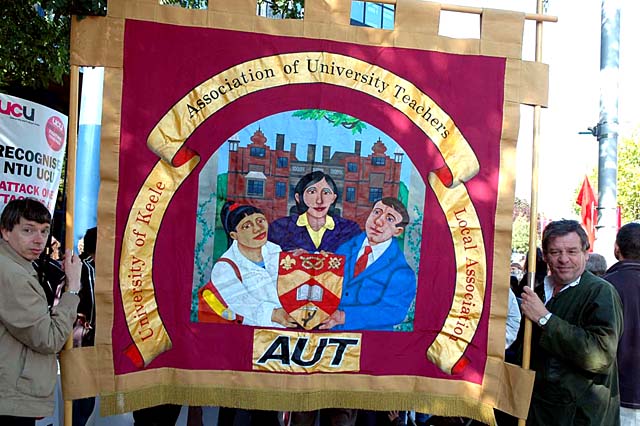 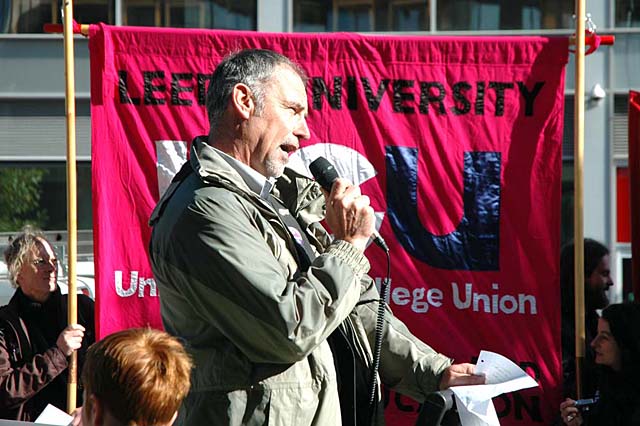 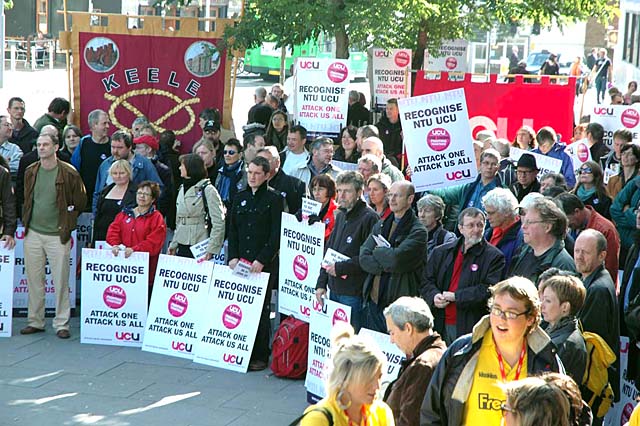 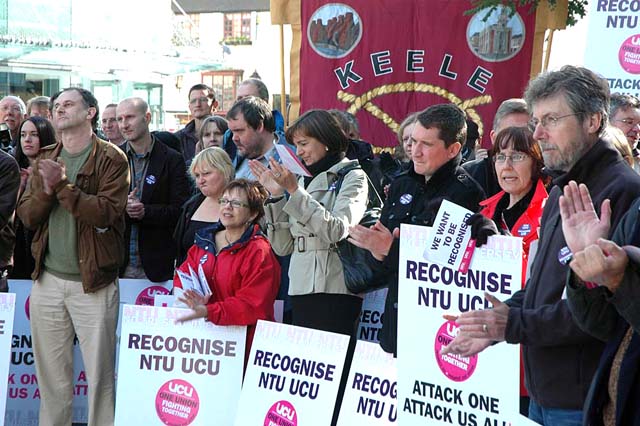 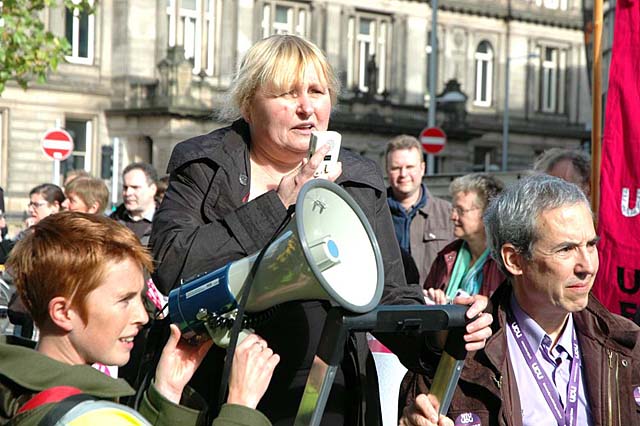 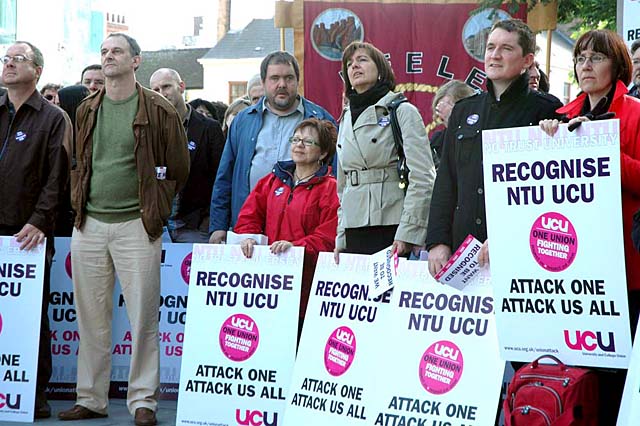 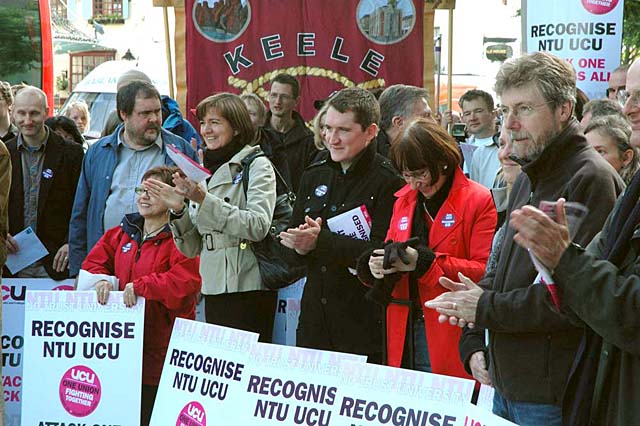 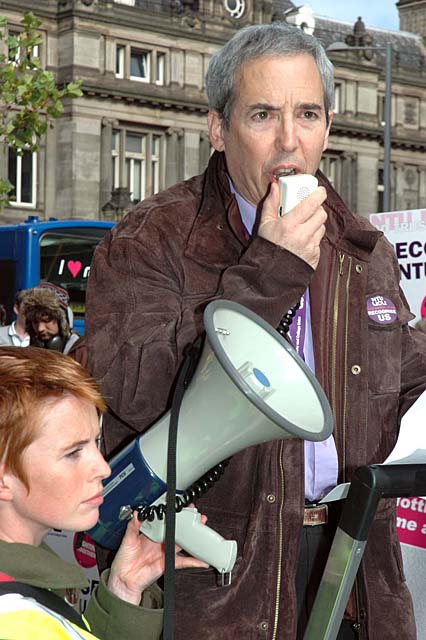 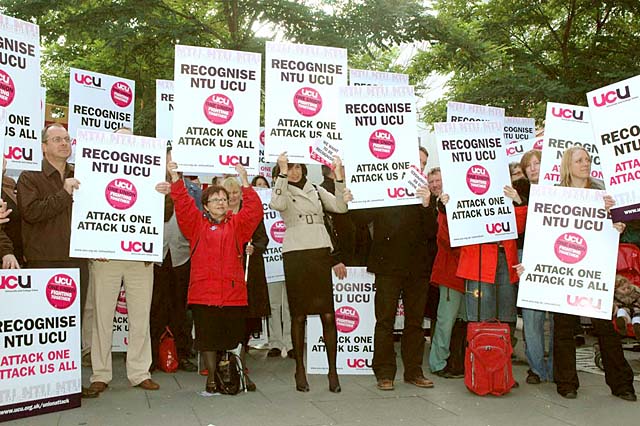 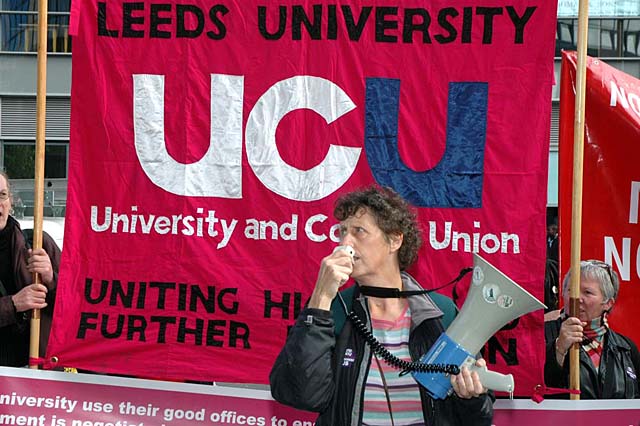 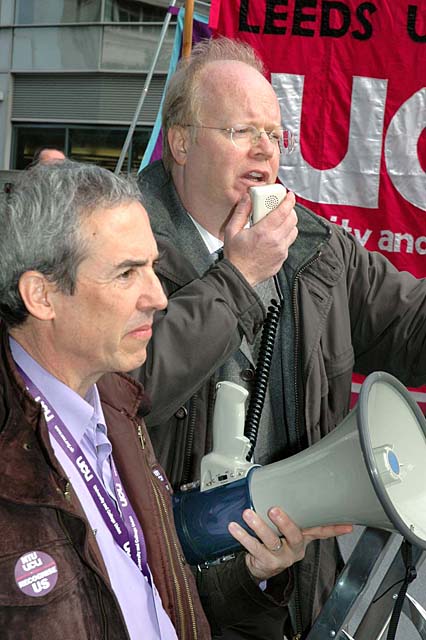 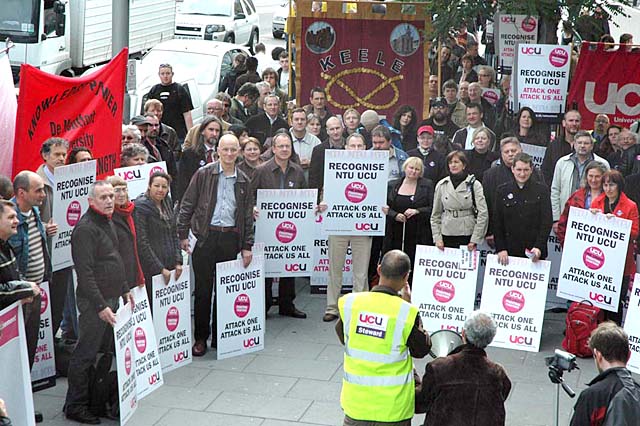 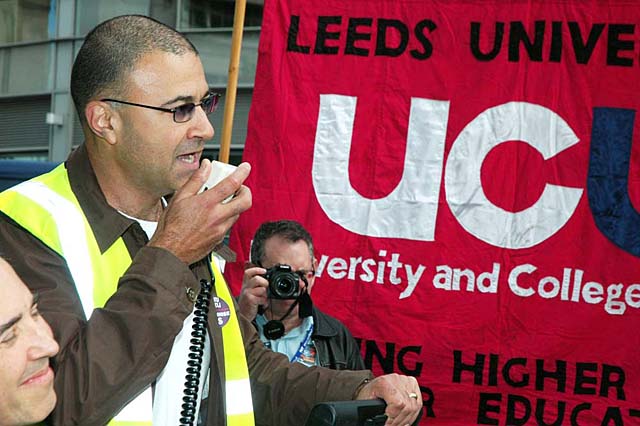 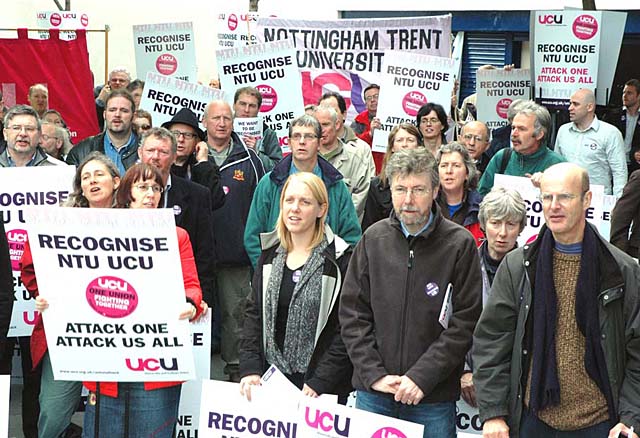 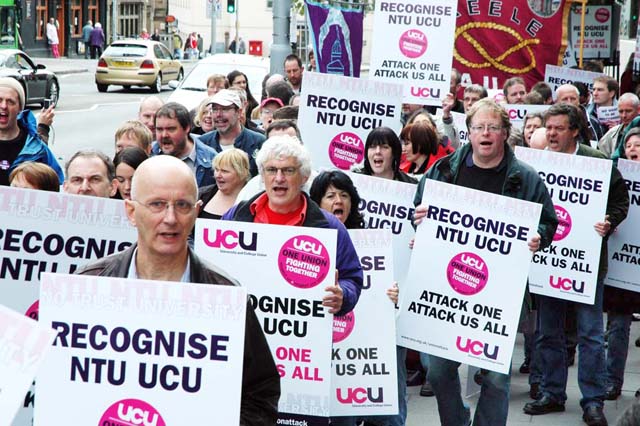 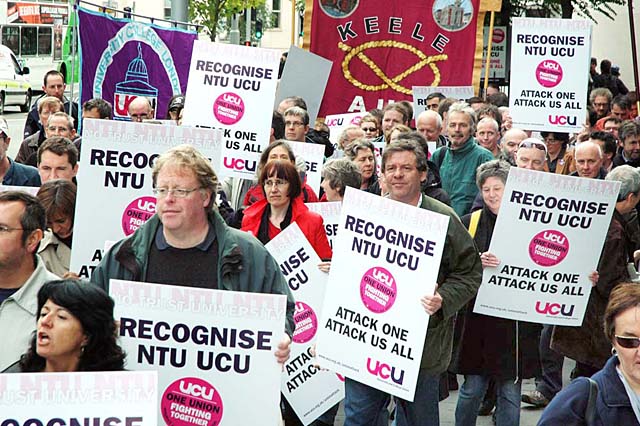 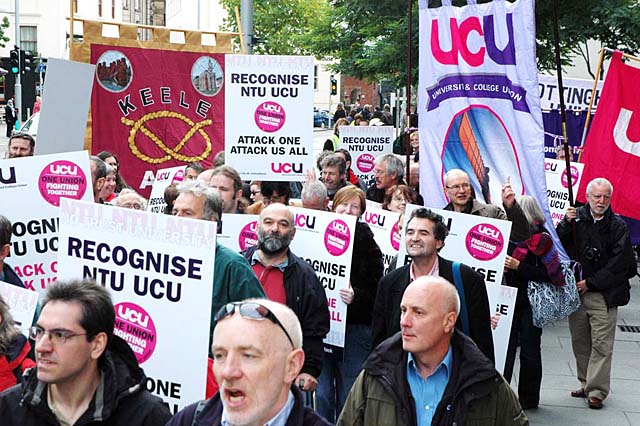 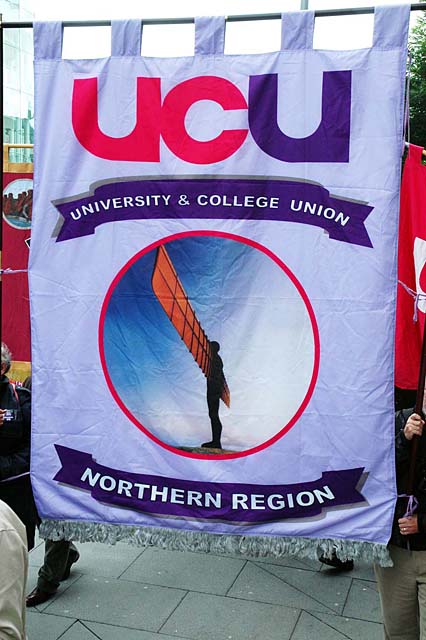 On 12:30 on Monday 6th October 2008, staff and students from Nottingham Trent University together with hundreds of UCU members from all around the country held a national rally outside the Royal Concert Hall in Nottingham.

Nottingham Trent University has formally terminated recognition of UCU in a direct attack on independent trade unionism on the campus. The university has been attempting to rewrite the recognition agreement for months, proposing a set of radically inferior arrangements that would see the campus unions marginalised in favour of a 'consultation and information forum' that would include non-union representation, while facility time for reps would be cut by a staggering 80%.

UCU has attempted to negotiate with the university but managers have refused to move one inch from these proposals and on Friday, they formally terminated the recognition agreement with three months notice, a full six months less than is stipulated in the agreement!

Those present made clear their opposition to Nottingham Trent University's plans to de-recognise the union and cut facility time for union reps in a protest in the city centre today.

The protestors handed out leaflets explaining the reasons behind the current row to thousands of new Nottingham Trent University (NTU) students.

Protestors from across the country, including cities as far away as Newcastle and London, gathered outside the Royal Centre in Nottingham at the lunchtime rally to coincide with the vice-chancellor addressing new students inside. The crowd then heard speeches from supporters including UCU head of higher education, Malcolm Keight, and Sasha Callaghan, the union's president.

Local UCU members are angry that the university is formally terminating recognition of UCU - the world's largest post-16 education trade union. Despite NTU saying it will continue to deal with the union, it is insisting that it will only recognise UCU if it complies with its new proposals. If there is not a breakthrough in negotiations staff will take strike action on Tuesday 21 October.

UCU says Nottingham Trent has been attempting to tear up the current terms for negotiating with the union for months in favour of radically inferior arrangements that would marginalise the campus unions and cut facility time for union reps by 80%.

The existing Recognition Agreement signed by the unions and the University provides for nine months notice of termination. On 4 July the university wrote to UCU and said it was aware that it should give nine months' notice, but had decided to terminate the agreement on 4 October.

UCU president, Sasha Callaghan, told the rally: 'NTU members have the full support of the national union. They have to win this fight to defend the right of staff in the sector to independent union representation. The whole academic world is now watching the University and I urge them to come back to the negotiating table before their reputation is further damaged.'

keep up the good work!

well done to those involved, i hope the idiot management think twice about derecognising now. shame i couldn't make it up there...

If the workers take a notion,
They can stop all speeding trains;
Every ship upon the ocean
They can tie with mighty chains.
Every wheel in the creation,
Every mine and every mill ,
Fleets and armies of the nation,
Will at their command stand still.

To the former student