Amdani Juma remains in immediate danger of deportation. There was another demonstration at 12.30pm in Market Square on Saturday 11th Oct to show continuesd support. The demonstration insisted that the Home Office remove the threat of deportation for Amdani. 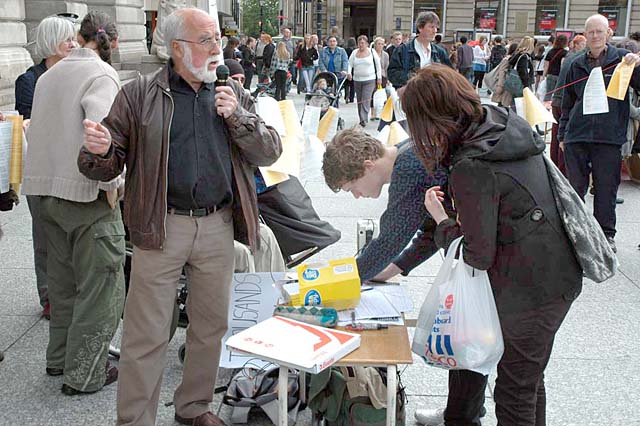 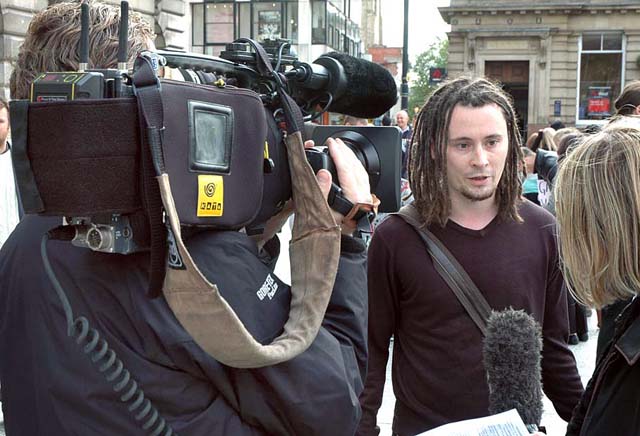 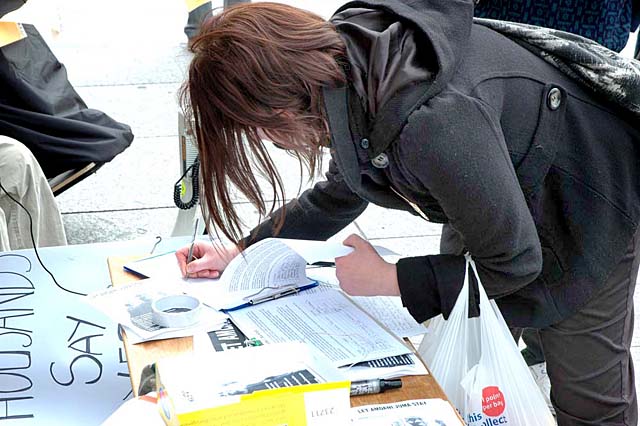 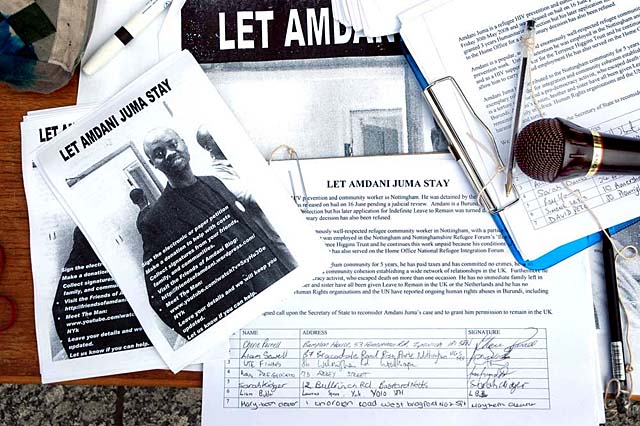 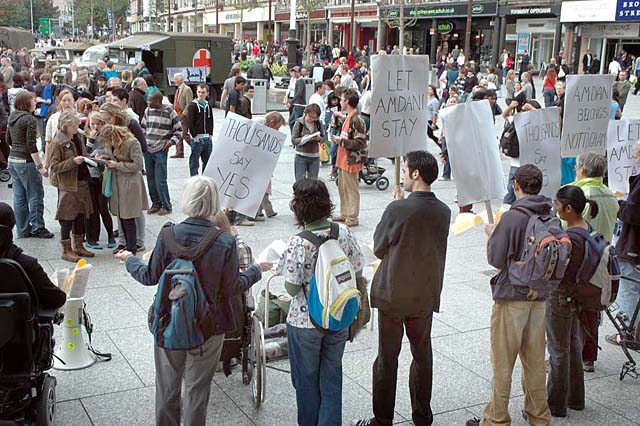 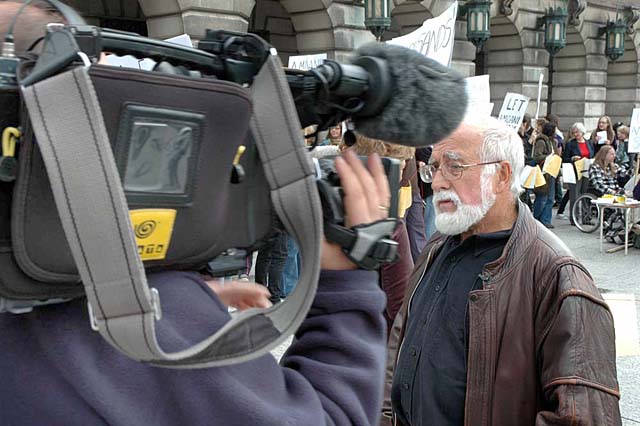 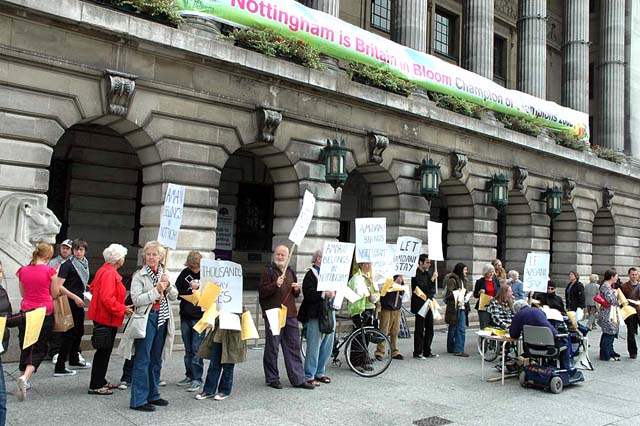 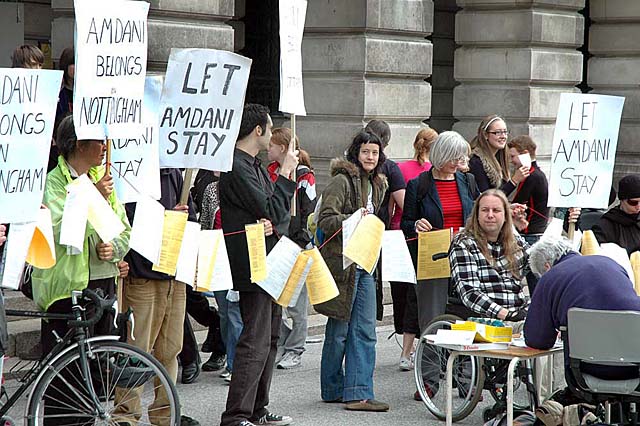 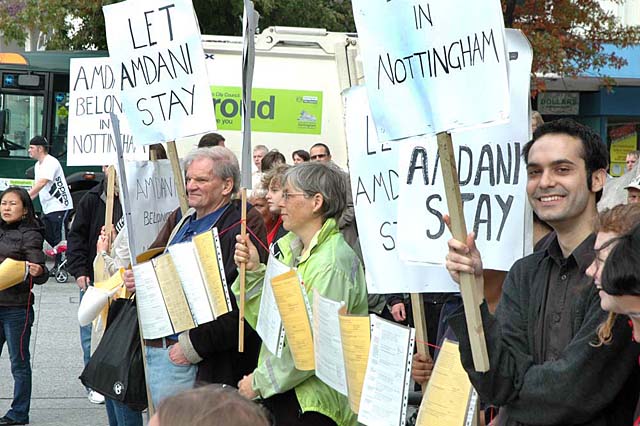 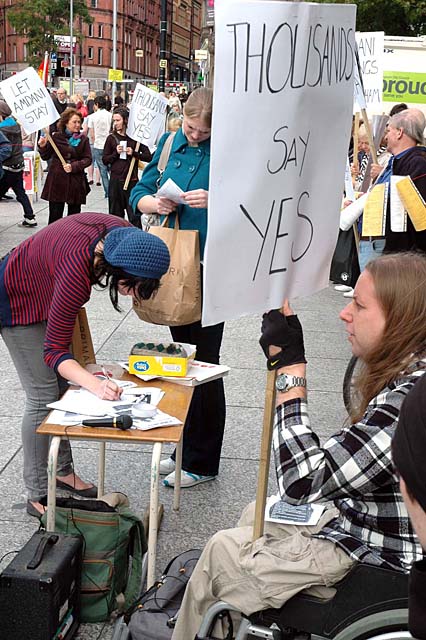 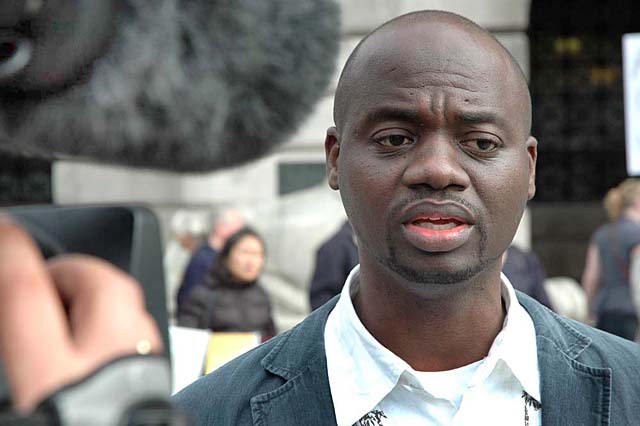 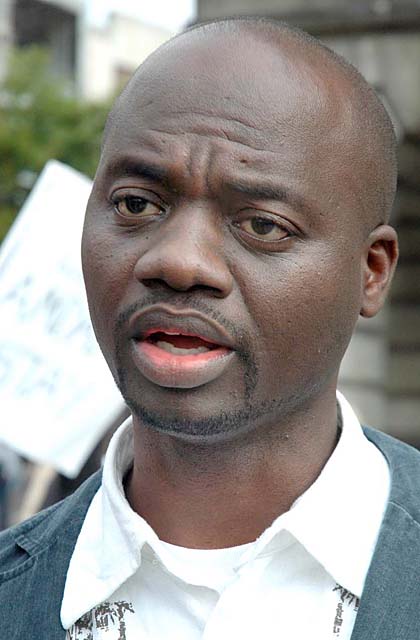 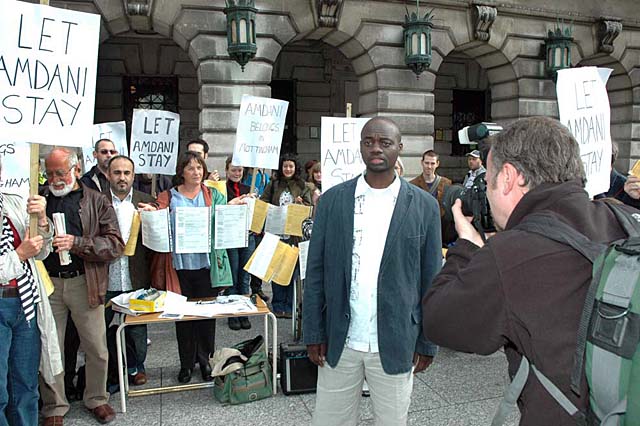 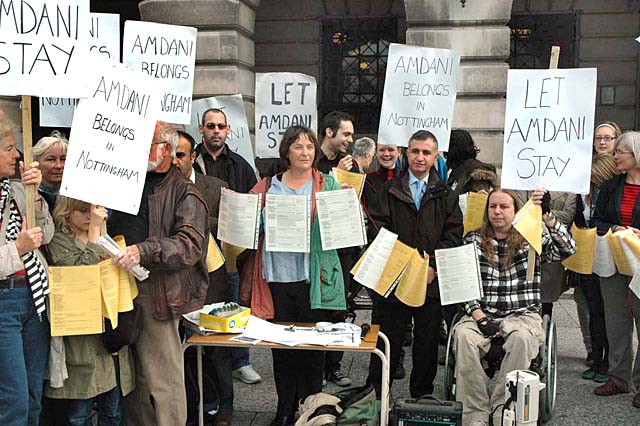 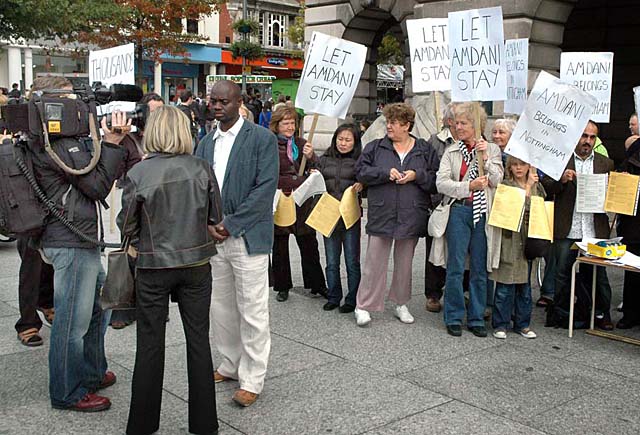 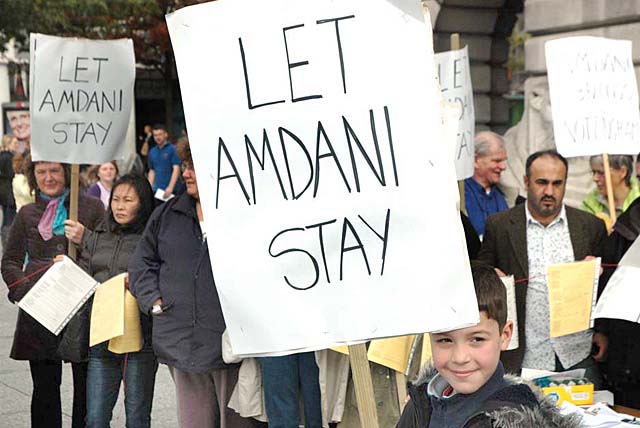 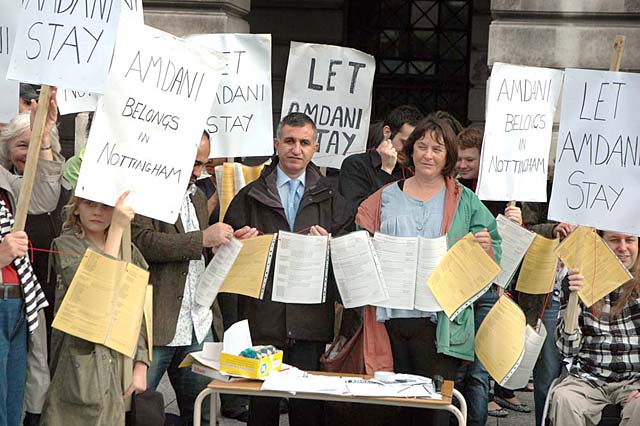 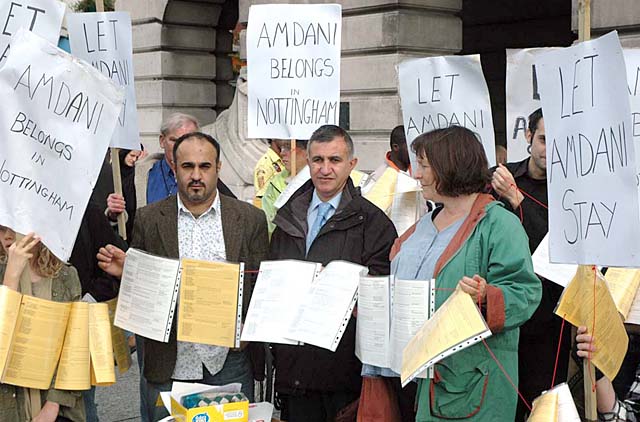 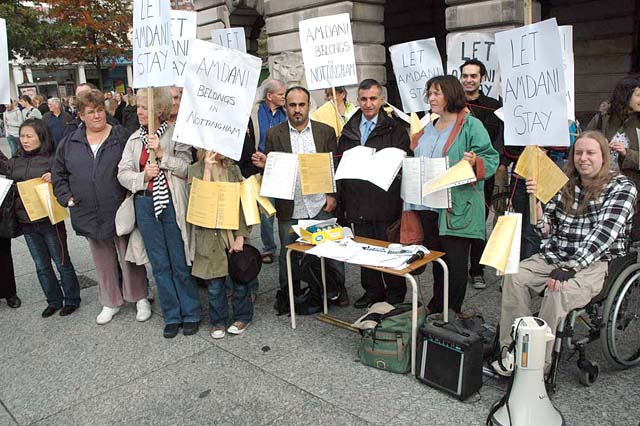 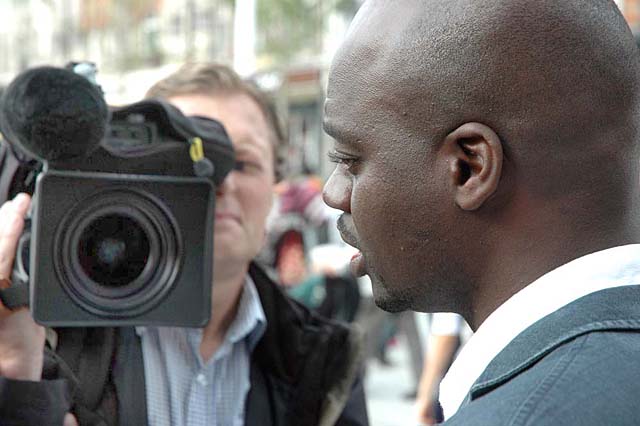 Amdani Juma remains in immediate danger of deportation. There was another demonstration at 12.30pm in Market Square on Saturday 11th Oct to show continuesd support. The demonstration insisted that the Home Office remove the threat of deportation for Amdani.

Amdani Juma was granted bail pending a Judicial Review on 8th June 2008. Since then he has not been allowed to continue with his paid employment and has had to take a 40 mile round trip from Nottingham to Loughborough every week to report. During the long wait and uncertainty, local people have continued to support him and his case and to raise awareness about his contribution to the region. 250 people have signed postcards to send to their MPs to highlight that Amdani’s work has affected their constituencies.

One of the “Friends of Amdani” says
“We are continuing to raise awareness about this issue and we won’t let up until justice is done. Some people think that because he was released, it is all over: we are trying to keep everyone updated with what is going on, as well as continuing to let more people know about this injustice. Last Saturday in Nottingham City Centre 150 more people signed the petition in less than 2 hours. The whole of Nottingham will be awaiting a just outcome.”

Background:
Amdani Juma, a refugee HIV prevention and community worker in Nottingham, was detained by the immigration authorities on Friday 30th May 2008.

He spent 18 days in detention during which time a flight was booked for his removal on two separate occasions. Following protests by local people, local and national organisations, a meeting with Liam Byrne and Alan Simpson and representations from his solicitor, Amdani was released on bail on 10th June 2008 pending a Judicial Review.

Amdani is a Burundian national. In 2003, he was granted 3 years Humanitarian Protection but his application for Indefinite Leave to Remain was turned down. A further application for discretion on the grounds of his contribution to the Nottinghamshire and East Midlands community was also refused. Alan Simpson, MP for Nottingham South, and Nottingham Council leader Jon Collins have both spoken out in opposition to Amdani’s proposed removal. Local people have rallied to his support with three demonstrations in Nottingham and an online and paper petition combined have a total of over 5,700 signatures.

http://www.petitiononline.com/amdani/petition.html contains many testimonials from the community and has over 2,500 signatures. Paper petitions total over 3,000

A short campaign video paying tribute to our good friend Amdani Juma can be seen on YouTube:


previous indymedia coverage on this campaign:

Another Nottingham Activist Detained For Deportation

Thank you for the pics, I really wanted to be there but was really ill,

What is the latest news? I heard Amdani is still here?