Their action against the Expo, dubbed by campaigners as the ‘Newark Exposé’, was staged, they say, to protest against the ‘greenwash’ that Biofuels can be sustainable and are good for the environment. John Simmons, from the roof of the Newark building, said “It is unacceptable that the Biofuels industry, which is responsible for large-scale rainforest destruction, evictions of communities, hunger and accelerated climate change hold conferences where they portray themselves as ‘green’”.

According to a recent World Bank report, which the White House attempted to bury, 75% of recent food price rises are attributable to the increasing use of Biofuels. Given that 100 million extra people are going hungry this year alone, activists are incensed that this trade show has been timed to coincide with World Food Day.

Jessica Boyd justified her actions by saying that: “The evidence that large-scale Biofuels are worsening climate change, displacing food production and devastating communities and biodiversity is overwhelming, yet governments still support this destructive industry. This is why I was left with no choice but to take action.”

Outside the site, in front of a large banner which reads “inside for greenwashing, hunger and deforestation” another separate group of activists from Leeds are conducting a leaflet and banner protest at the gate.

The action comes at the tail of another week of protest with the much publicised Climate Rush on Parliament. The activists intend to stay in position for as long as possible. Four of the group are being detained at present.

I am the organiser of the Biofuels Exhibition & Conference that took palace at Newark on the 15th & 16th October 2008. The Newark Exo & Conference is mostly concerned with small to medium scale production of bioenergy from waste streams such as used cooking oil, waste wood and biogas from farm and food waste.

Contrary to reports, the protesters did not bring the exhibition to a haltl and were very much a side show. It was hard to understand exactly what the protest was about as they failed to engage with anyone in a meaningful way despite my best efforts to talk with all of them directly. I believe they were saying that the exhibition and Conference were helping to promote large scale agro-fuel crops and contributing to world hunger because of land use choices.

I invited all the protesters to put their point of view across in the conference sessions that were discussing land use and future fuel feedstock options. I had contacted biofuelswatch ahead of the conference and again on the day of the protests. They declined to take part despite genuine efforts on my behalf to encourage debate.

Land use is a complex subject and involves many many choices for land use around the globe. Non food based biofuels will be a reality in a few years such as jatropha and Algae. Biofuels is often tarnished because some palm oil makes its way into biodiesel (approx 3%) the other 97% goes into cosmetics and food. Tackling world hunger appears to me to be a political issue not a biofuel one.

If we are to complain about land use for fuel should we not also be thinking about other non food uses for land such as Tobacco, Tea, Coffee, cotton etc. and how about golf courses! In addition, a major source of income instead of large scale marijuna, poppy and cocaine cultivation could be Jatropha a promising non food based oil source for biodiesel that would be a great income source instead of narcotics. How about starting this in Afganistan to break the cycle of drug production?

Biofuels media is pro bioenergy, however, as an organisation we have always sought to engage with the greens on their issues and be inclusive, indeed our conferences last year and this have had Biofuelswatch, greenpeace and oxfam representing the green viewpoint.

Hysteria surrounding biofuels is miss-placed and over time will be shown to have been a miss understanding of the goals that governments (especially the UK) have set for the industry regarding sustainability.

Anyone wishing to contribute to next years conference is invited to contact me at biofuels media so that I can add their issues into the conference streams.

Next year we will see more Biogas and Wood energy growth in the UK, these are genuinely green choices that use waste streams for creating energy from items that would have made CO2 and methane anyway. Millions of tonnes of waste wood and food / organic waste go to landfill that are valuable sources of future energy. The UK governments decision to allow small scale production of biodiesel to be made tax free has had a good effect in making local collection of waste cooking oils very efficient. Instead of disposing at landfill or pouring down the drain this waste product now has a value.

The UK government is backing Biogas, farms, schools, community buildings etc will be powered in the future from watse that would have otherwise entered the atmosphere as CO2 and methane.

At the European Bioenergy Expo & Conference we are committed to encouraging the sustainable development of bioenergy.

As a protestor at the Biofuels Expo & Conference I would like to make the following response to Richard Price.

We certainly did not wish to give validation to the conference by speaking at it.  We were not there to suggest amendments to biofuels policy but to highlight that the claims to be focussing on ‘good’ biofuels is yet more corporate greenwashing.  The conference was promoting expansion of an industry which must be stopped.

We produced flyers which stated our concerns regarding the conference and these were available from the protestors at the showground gate.

The speakers and exhibitors were from companies who are benefitting from the rapid expansion of biofuels from industrial agriculture, also known as agrofuels.  The protest was not aimed at people converting waste catering-industry vegetable oil to biodiesel.  It was aimed at the conference and exhibition as a whole whose aim is to facilitate the expansion of the agrofuel industry.  Flyers produced by exhibitors at the Expo showed plainly that their products were aimed at crops such as soy and rapeseed grown for fuel.

Many of the speakers are actively involved with promoting or campaigning for large-scale agrofuel expansion.  For example:

Rory Clarke, Director of Rix Petroleum, has been lobbying for government policies to greatly expand agrofuels for many years.

James Scruby is director of the company Viridesco, a UK company trying to acquire large tracts of land in the global South for jatropha plantations, for the European market.  They currently operate in Mozambique and Zambia and hope to expand into several other countries in Latin America, Africa and Asia.

Jenny Harrison / Don Kinnersley of Deloitte:  Deloitte is an international association for financial advisors, risk management advisors and consultants.  They describe their role in the biofuels market as follows: “Deloitte can assist in seeking finance for biofuels companies by meeting with management to understand the business plans, the stage of their operations and risk profile, and to assess appropriate types of investment. Deloitte may then approach potential investors and assist in negotiation.”  Deloitte’s response to the food price crisis has not been to reconsider their support for biofuels.  Instead, they’ve advised: "the ruthless pursuit of business simplification".

The conference, among other things, promoted the bio-heating market – 3 billion litres they claim. That such expansion could come from waste is absurd.

Indeed agrofuels are not the only land-use problem.  However, this conference and many participants are encouraging corporate land-grabs and huge increases in non-food industrial agriculture.  The proposed targets by the EU and elsewhere for biofuel use are testament to this.

The use of non-food crops such as jatropha for agrofuels causes land use conversion with associated increases in climate change emissions, reduced availability of land for food, and is forcing people off their land.  Claims that jatropha is drought resistant are irrelevant since a good water supply is necessary for the plant to produce useful quantities of oil.

We only need to look at such schemes as the Forestry Stewardship Council to see that sustainability standards fail to halt environmental catastrophes.  Certification can not remove the fact that agrofuels remove land which could otherwise be used for food or could form biodiverse eco-systems that are needed for climate stabilisation and for maintenance of biodiversity.

There can be no sustainable development of agrofuels.

Photos of the protest 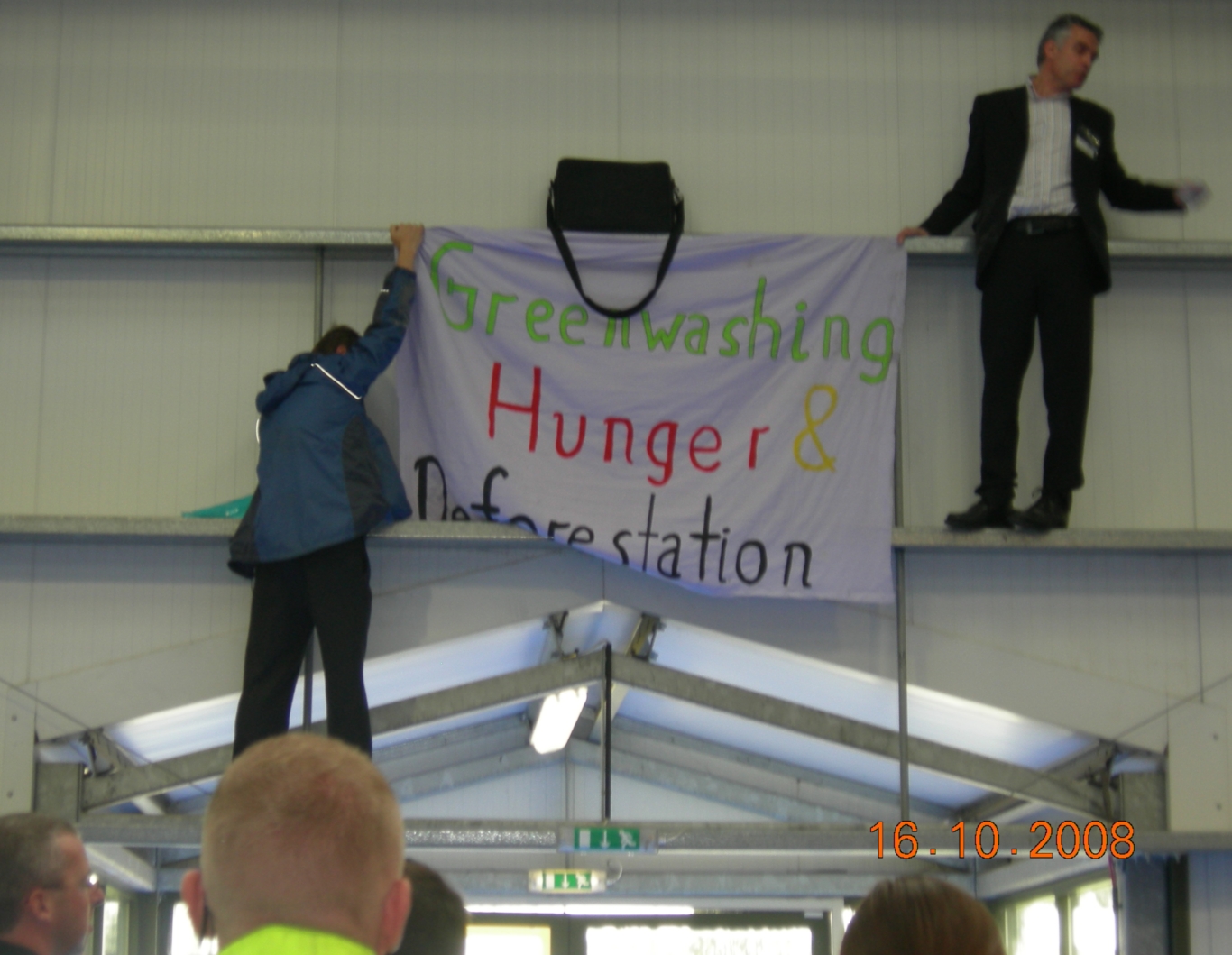 Protestors hang banner inside the exhibition - it was here from 3.5 hours. 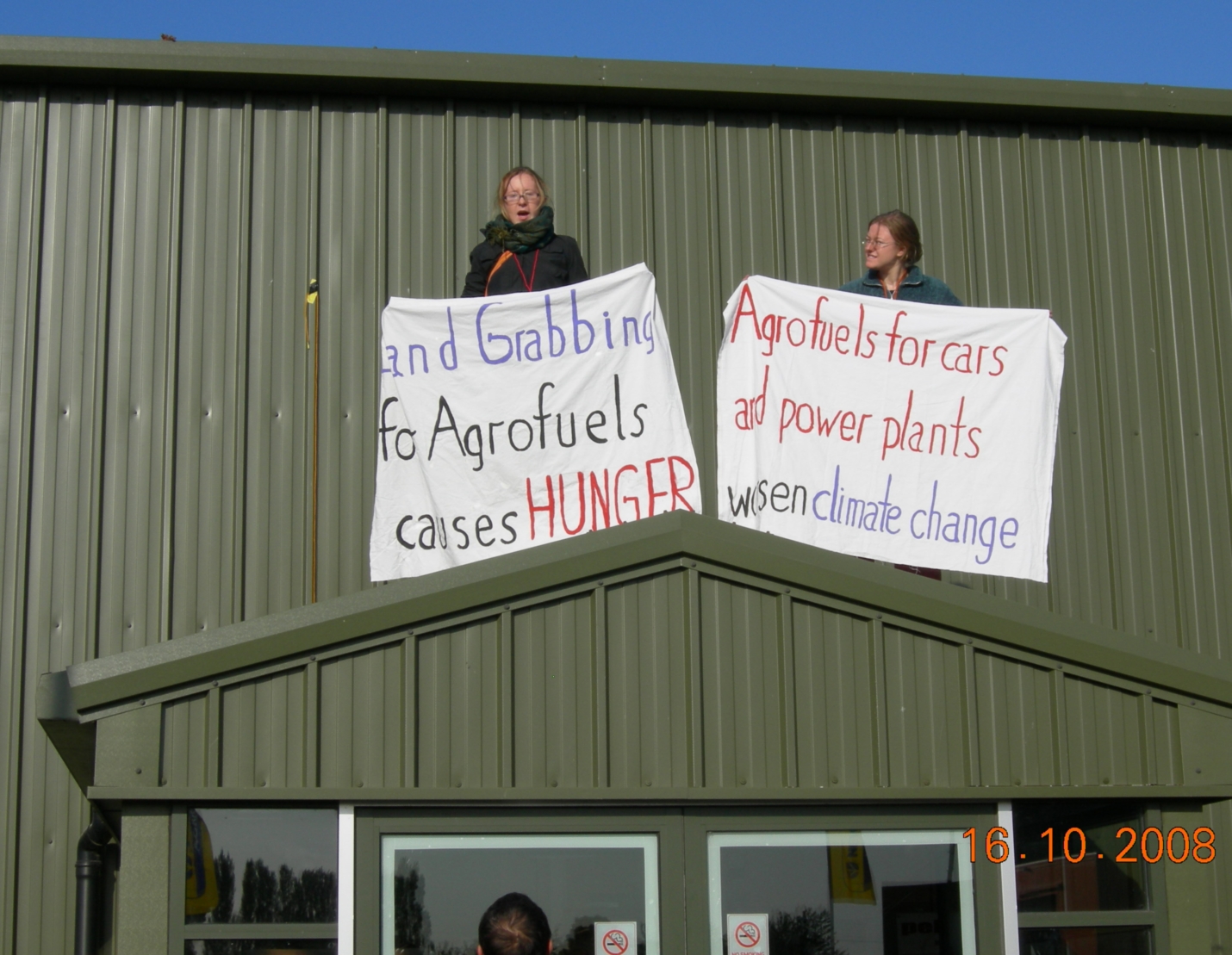 Banner on the roof near the main exhibtion entrance 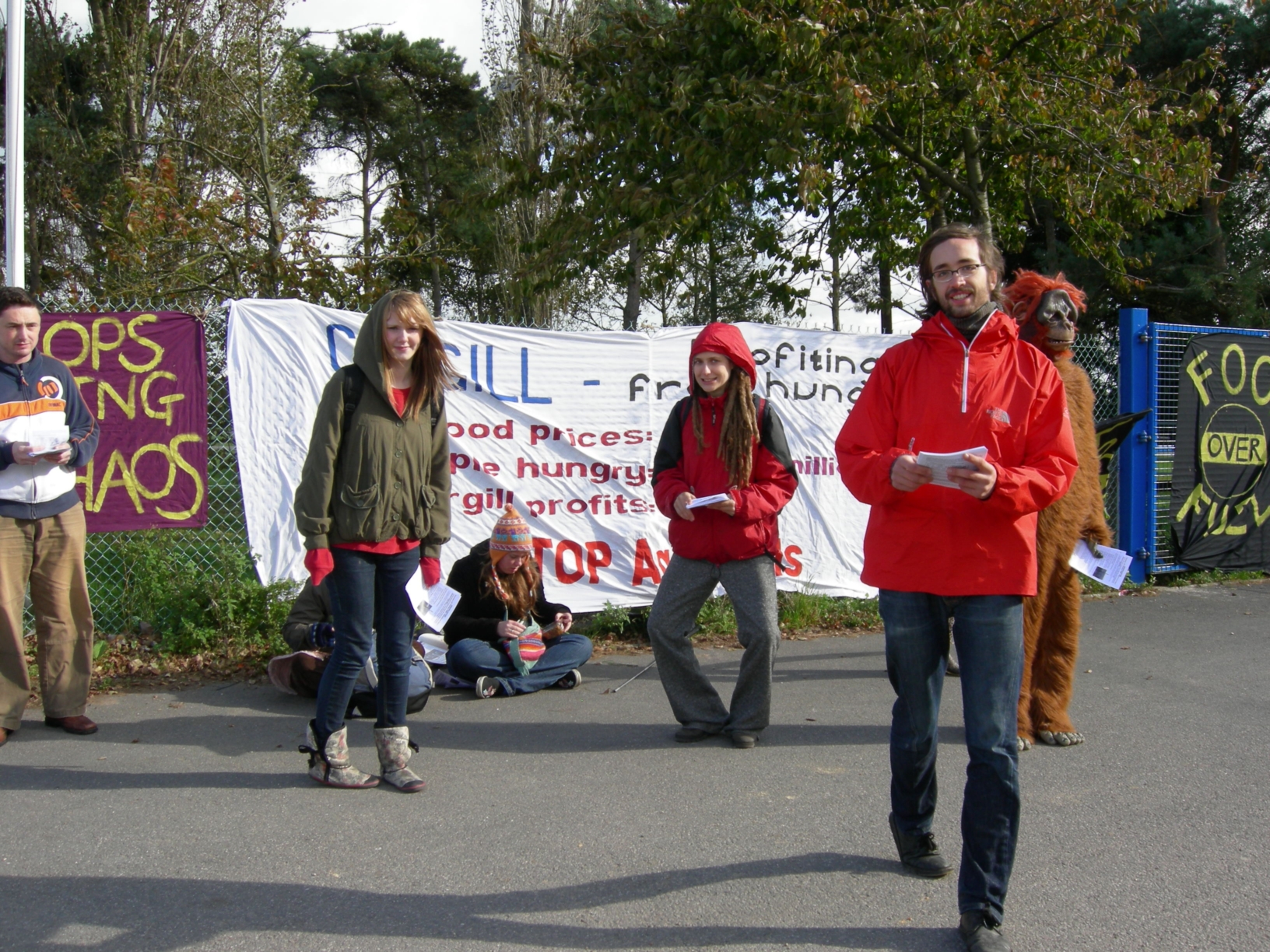 Banner protest at the gate 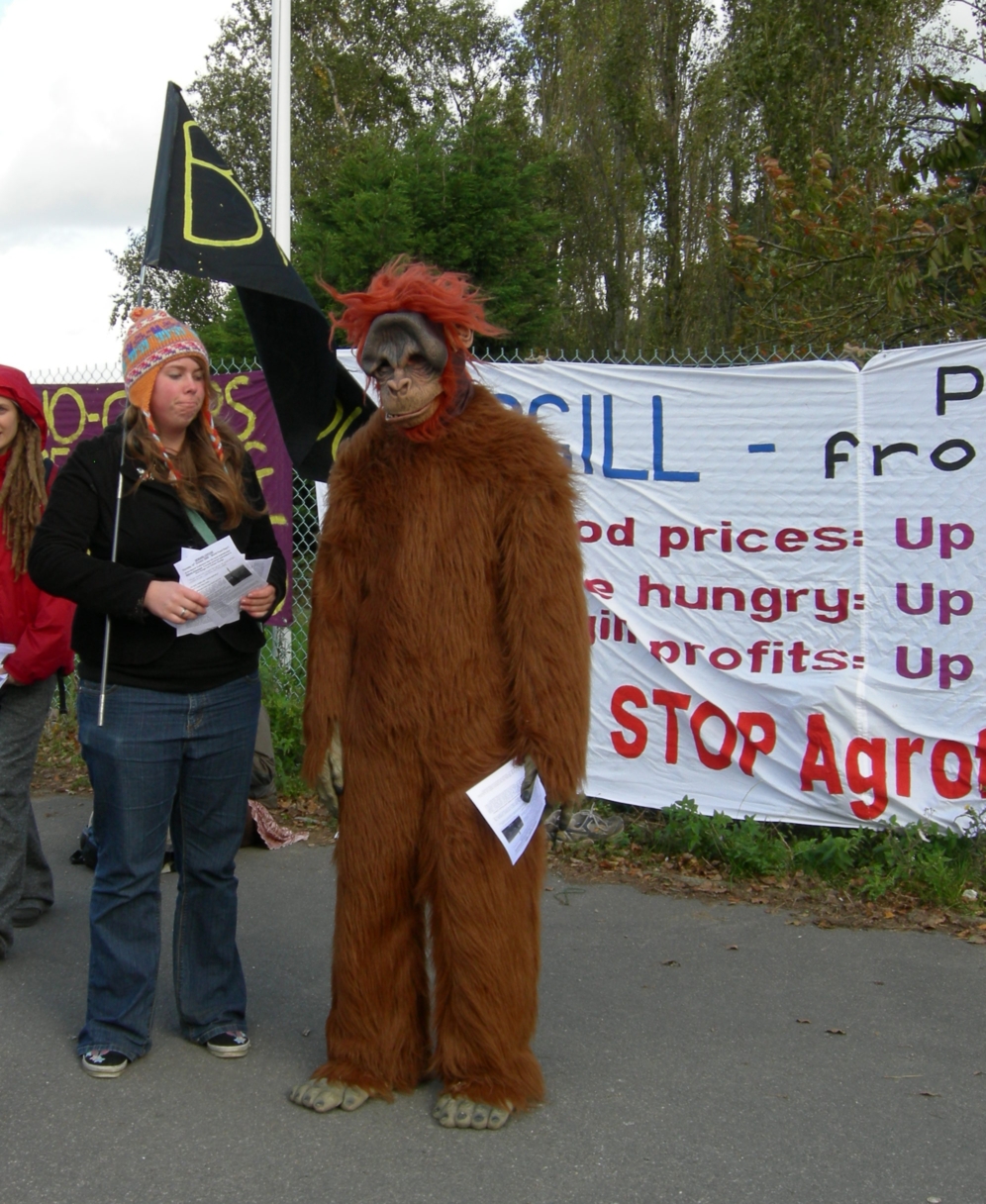 Banner protest at the gate

Here are some photos from the protest.