On the 6th April 2008, Henry had initially painted graffiti on the Army Careers Office at the Victoria Centre, in Milton Street, Nottingham. He did so while wearing a hi-vis vest and was unmasked. His choice of slogans included "War 4 Oil" & "Terrorists join here" on the front of the building in red paint. 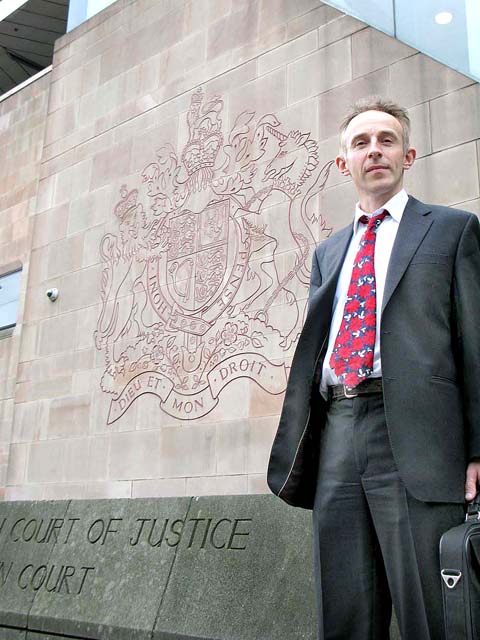 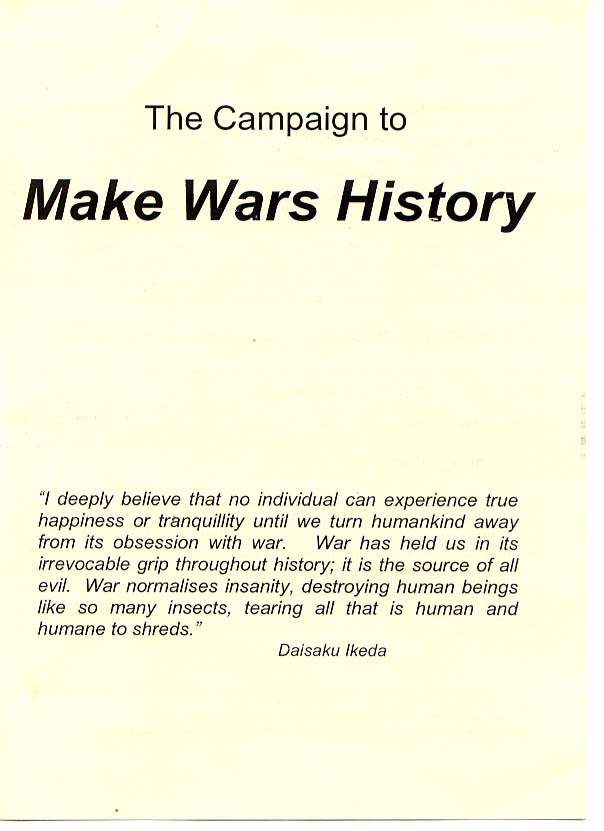 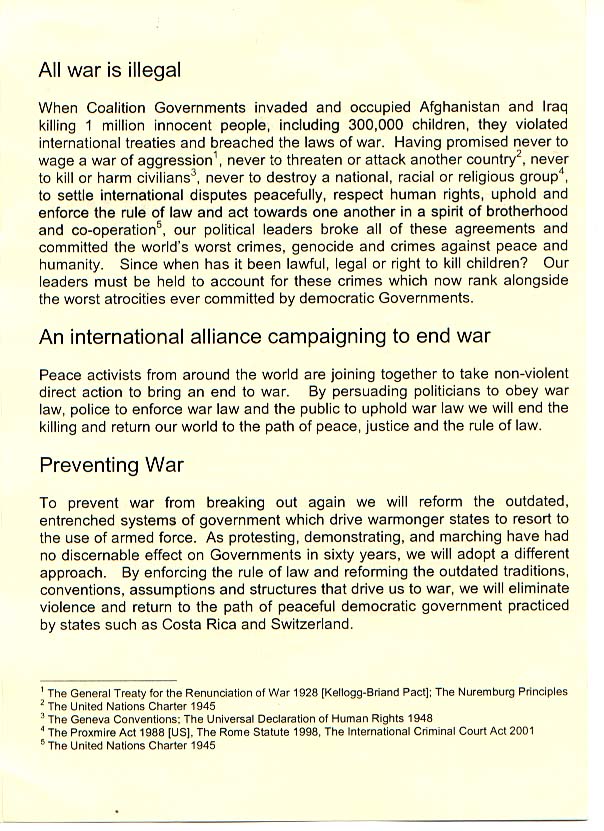 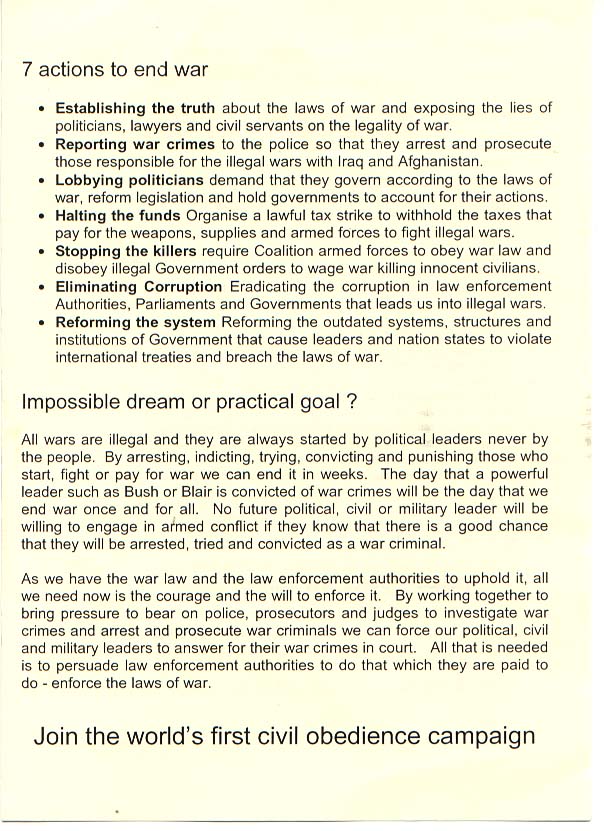 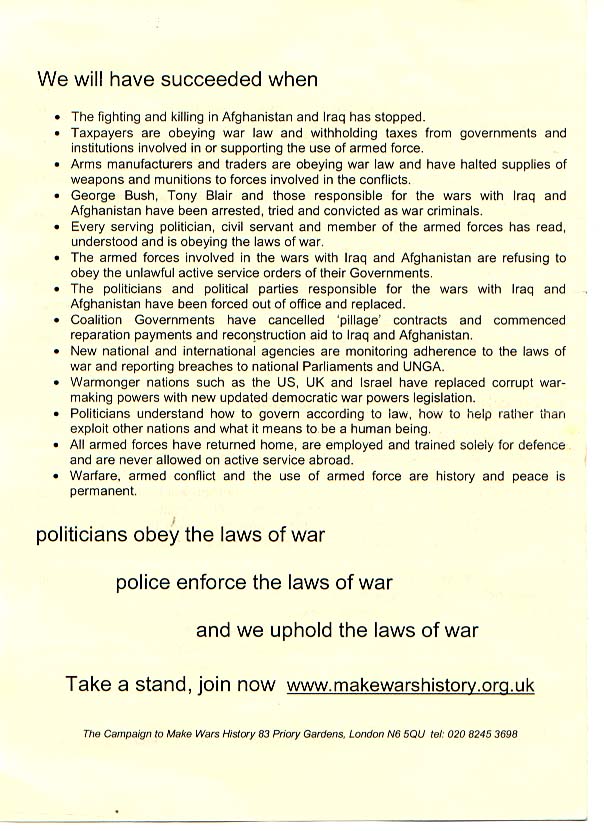 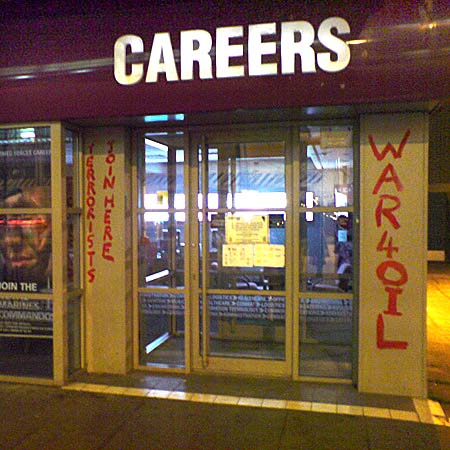 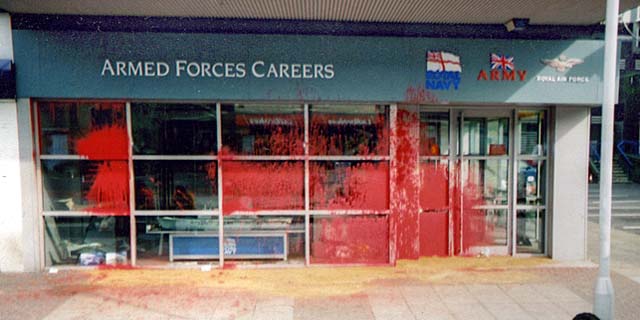 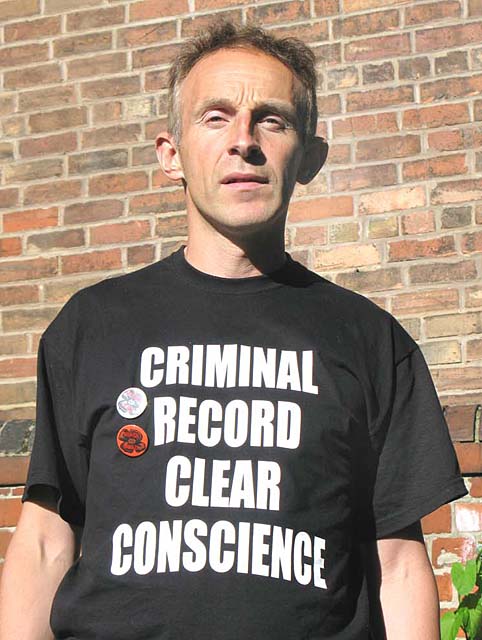 On the 6th April 2008, Henry had initially painted graffiti on the Army Careers Office at the Victoria Centre, in Milton Street, Nottingham. He did so while wearing a hi-vis vest and was unmasked.

His choice of slogans included "War 4 Oil" & "Terrorists join here" on the front of the building in red paint. Since the place was last painted and decorated, CCTV equipment had been prominently installed and is capable of viewing the entire frontage. Having finished the job, and a policeman already dispatched to look into it; our hero greets the constable with a pot of red paint and a brush and invites him to view the handywork. He is arrested for criminal damage and dragged off in chains to the Bridewell Police Station.

Now, from the outset here, it is obvious that he done it, and he wasn't sorry. Henry, a former Territorial Army Soldier says his objective was to warn the passing public and new recruits in particular about the illegal nature of the current military adventures in Iraq and Afghanistan.

On the 17th July Henry was before the beak at Nottingham Magistrates Court, were he was found guilty of Criminal Damage and sentenced to a 12 month conditional discharge. Additionally, Henry had been directed to pay £200 compensation for the damage done to the Recruitment Office. At the time, he said he wouldn't be paying because: "I don't give money to terrorist organisations" :-)

Thursday’s hearing was about appealing this conviction. Appearing before Recorder WJH Harbage QC in the Crown Courts. Henry's main plan was to point to the 'lawful excuse' provided for in 5.2.B. of the Criminal Damage Act 1971.

The idea, as it is contained within a number of pieces of law, is to claim necessity or committing a crime to prevent a greater one. [see Kingsnorth & Ratcliffe power station cases] . Further, a person / fireman smashing down a door in order save a person from burning building, should not be convicted of criminal damage to the door. He said, "in this case, preventing a much greater crime that of illegal wars in Iraq and Afghanistan. Further the misleading information given by recruiting offices to recruits".

He was a bit handicapped from the start, being unrepresented. He had a witness that he proposed to call for expert views but the first part of the case was about the ineligibility of him to be an 'expert witness'. Also, they had not submitted a report to the court 7 days before as required. He was not academic or professionally qualified. However, as Henry points out, there are few in this field that are. Mr Chris Coverdale from the Campaign to Make Wars History had turned out to assist Henry, but his evidence was disallowed. [See leaflet above for what he might have said].

Henry outlines his case to the court: In a civilised society the citizen has a duty to make a public stand and to bring to attention of the public, the crimes and war crimes of genocide and murder. These crimes are committed by the government, ministers and officers. By their actions, whether they know it or not, they are in support of these heinous crimes. His citizens duty was thus to inform recruits of these matters. He did so in full view and with no intention to hide his actions. Henry goes on to tell the court of magnitude of deaths and injuries sustained. A few times during his explanation, the judge holds his speech, informs him the witness box is not a soapbox, and calls him back to the criminal damages act!

Mr Timothy Achurch for the prosecution questions if this was in fact an action designed to inform the public, or, simply straight vandalism. He fails to see how the paint and graffiti are necessary in the protection of property.

There is no lawful excuse in his actions. He agrees with Mr Achurch that he fails to see how the paint and graffiti are necessary in the protection of property. Further, he states that the wars are not wars of aggression.

He does not doubt his sincerity but Henry Twiggers actions were not within the defence provided for with section 5.2.B of the Criminal Damage Act 1971. There simply was not the immediate need, say described in the example of breaking down a door to rescue from fire. His actions were far more removed and there was no lawful excuse. It was in fact, he said, no more than a publicity stunt. Appeal dismissed.

Mr Achurch asks for £335 costs. Judge orders cost paid within 28 days and that the original magistrates courts sentence of 12 months conditional discharge stands. There was of course the original £200 compensation to clean off his handwork. Henry says he still can't pay that because it 'aids and abets' the system he's protesting about.

Kellogg-Briand Pact: an international treaty providing for the renunciation of war as an instrument of national policy.

The Campaign to Make Wars History

So much better than much pointless crap sold in galleries. Well done Henry!
Solidarity

Invasion of Iraq, no WMDS found, invasion of Afghanistan has no legal

Invasion of Iraq, no WMDS found, invasion of Afghanistan has no legal standing. Under universal & international law both are illegal & answerable in the courts.
The political pandering by this judge a member of the "independent judiciary" is a travesty & beyond BS. Well done Mr Twigger, public opinion including many of those who have served or are serving in the military agree with you even if this particular "hounourable" gentleman does not.
Many soldiers in Iraq or Afghanistan sum it up by trying to stay in base as much as possible, only firing in self defence or to stop massacres, hopefully they will do this more in defence of innocent civilians. They let the Blackwater dogs of war & US marines go out in defence of oil profits, forcing soldiers into battle is not as easy as it was in the 60s&70s consequently there is less fragging of officers, these tactics help stretch the illegal orders of the outgoing regime in the USA.
Many soldiers believe 911 was set up or at least allowed by the US neocons, polls of around90% believe this in the USA this is marked change from the reactionaty uninformed opinion in 2001, no comparable poll has been done in the UK. What is needed is something like a VietnamUSS constellation refusal to operate in a illegal war or a Russian Battleship Potemkin rebellion in honour of universal law,democracy & human rights. Both cases were successful& allowed the soldiers to clear their conscience, in the case of the USS constellation it helped end the Vietnam war & got families back together without penalty. Although it happened in 1905 Potemkim helped end WW1, inspiring true universal soldiers everywhere in the name of true democracy.
Mr Obama the removal of troops from Iraq & Afghanistan is necessary immediately & the use of all professional soldiers immediatey to fight the biggest threat to humanity & planet earth Global Warming is essential.
Operation Plant trees not Bombs needs implimented on a massive scale, especially in regions around & below the equator, in accordance with the latest mass surveys by NASA, worth checking out.Apparently tree planting in the northern hemisphere on the scale we need should be more spaced out & preferably of indigenous lighter species which reflect more sunlight.
Keeping occupying troops all over the world is totally unsustainable especially in a time of recession, mass popular movements get people out of recessions not consumerism or war. We have a way out it in the fight for a better planet against climate change created by greedy corporations otherwise humanity has a grizzly end in prospect. Anyway I hope this happens soon, so I can stop rambling on, si vous play.

I went to school with old Twigger, never had him down as a hands on protester. I applaud his direct action. I'm amazed (but not surprised) that Chris Coverdale was slapped down with a derisory "Six years of reading up does not make him qualified to be an expert witness in this court" as reported in the Nottingham Evening Post. Does that statement by William Harbage, QC invalidate substantial chunks of his own law degree and will his assertion have any impact on the curriculum of the Inns of Court ?

Surely this court should have considered the relative extent of the crimes committed - a bit of paint on a building that caused no loss of life against the wilful deaths of at least tens of thousands of innocents in Iraq. If this is vandalism then the firefighter breaking down the door of a building to save lives is also acting out vandalism.

Whatever this 'court' says Chris Coverdale seems to know more than most about the laws of war.

The account above implies that the act of painting an army careers office was not necessary - that there was no immediate need. Was there any discussion in this 'court' of any alternative actions that Mr Twiggers could have engaged in instead, that would have had the same level of impact?

"He agrees with Mr Achurch that he fails to see how the paint and graffiti are necessary in the protection of property."
Did the judge in this case really say this? Who suggested that the painting was carried out to protect the Army careers office???

Anyway, this appears to have been a noble defence from Mr Twigger in the face of such moral outrages as those carried out in Iraq and Afghanistan, especially as someone unrepresented in law. No loss of life or even injury was caused by this.