What is the future of NDC owned Tennyson Hall? Questions need raising.

Tennyson Hall, Forest Rd West, Radford has played an important role as a youth and community centre for over 20 years. NDC has owned this building since 2002 and is now seeking to sell claiming there are no other viable options. Is this the true face of regeneration? Tennyson Hall needs protecting and restoring back to the youths and community of this area. 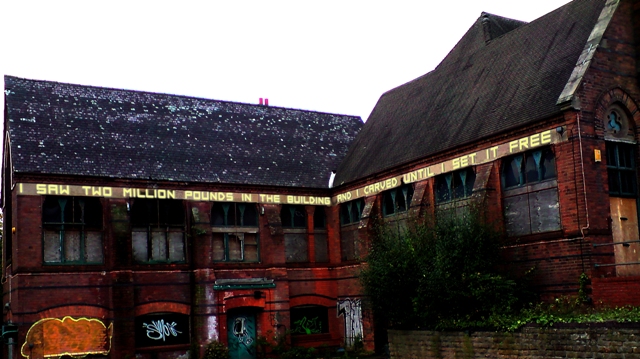 Attached flyer to be shared, posted and distributed as widely as possible. More important is that we act to stop NDC from continuing on this course of actions.
Contact them on 0115 9788553 or visit them at The Bank, 147- 149 Alfreton Rd, Nottingham and make your views heard.

This place has been neglected so long

I used to live down the road from here in a squat that we turned into a community centre. For a while, it was popular and had a real uniting effect on the local community. That was years ago. Tennyson Hall was crumbling back then.

Why did a group of volunteers with no money provide something that a funded centre with heating and paid staff could do? Why does New Deal For Communities fail to provide anything new that offers any kind of positive deal for communities?

Radford is a gun-filled crime hotspot filled with student landlords. Yet it is historic and attractive. Small things such as a community centre could make all the difference.

Is that photoshop, or really there?

Personally I think NCC should dismantle the new market square and use the materials to rebuild the youth centre.

NDC are clearly too busy making themselves look good than actually helping out communities in Nottingham. The solution, of course, is for the local community to help themselves by occupying the building and using it for something worthwhile. While there's money and paperwork involved nothing will get done.

Thank you for your comments. NDC has raised many hopes only to dash them. The 55 million initially made available was to provide additional services and sustainable change not replace or remove responsibility from the local authority.

This 'gun filled crime hotspot' is not how most people experience this area. Tennyson Hall still has an important role for the young people and the wider community. As far as the ASBO was concerned lots of good work was undertaken and ironically NDC has now been given this building to redevelop!

NDC has about 10 million left to spend and suppport in getting some of this focused into Tennyson Hall should be our priority, failing this all other options will be considered.

Unfortunately, Radford does have a lot of crime

Re. "This 'gun filled crime hotspot' is not how most people experience this area."

During the few months that I lived there, a woman was shot, the local shop was robbed and trashed so many times that the owners gave up, a man kept approaching me in the street for sex, windows kept being broken, teenagers kept threatening and harassing people, and practically anything that wasn't chained down or locked away got stolen.

I think it is fair enough to say that the area is a crime hotspot, blighted by drugs and money-motivated student landlords.

I also met some excellent people, and I loved Radford and miss living there. A community centre would make such a positive difference to the place.

The once elegant edifice of Tennyson Hall slowly crumbling away is surely the most powerful and poignant symbol of the failure of the regeneration of Radford and Hyson Green.

Despite what detractors say, NDC has achieved quite a lot. Some of the work on local parks is excellent, they've done good stuff with local schools and the extra police officers they paid for helped to reduce crime in the area.

Yet none of this seems in proportion to the £55m they had to spend and high-profile falures like Tennyson Hall only serve to emphasise the point.

I've had dealings with NDC and know some of their staff to be dedicated to the area and committed to their work. But in the end, it's down to politics and the usual clutch of senior executives, board members and consultants getting their high salaries on the backs of the poor people of the area.

I wish you well in your campaign to save Tennyson Hall for the community it has served so well in the past, but I'm not holding my breath.

Another day another lost dollar!

Ive lived near Tennyson hall for some 8 years and have seen nothing done to bring it back to life.
I hope it doesn't go the way of some student flats once owned by Derwent Housing- who sold it off to private investors who are being investigated by the serious fraud squad