Ten activists arrested following a blockade of the Rolls Royce Raynesway factory in Derby in April were in court last week. Eight were acquitted with two being found guilty. Seven of the eight found not guilty had been locked to concrete blocks outside the facility with the eighth having driven them there. The two found guilty had been locked onto the gates. All had been charged with aggravated trespass, seemingly an error on the CPS' part.

The court case comes shortly before Derby City Council is to hear a planning application from Rolls Royce to develop its site at Raynesway and a new campaign, dubbed Power Through Wind Not Weapons has been launched to coordinate protests against the factory which produces engines for nuclear submarines (which carry Trident missiles). Protests have been held outside the factory monthly, with one taking place immediately prior to the court case. 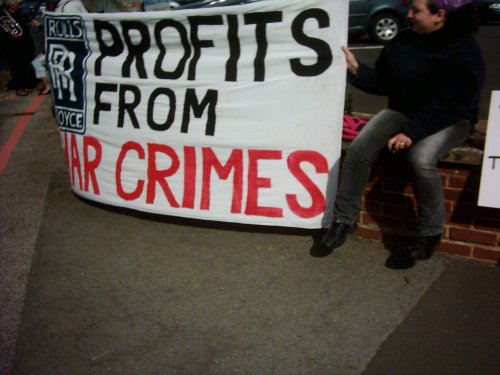 While many of the defendants were found not guilty, the judge suggested that the case may have turned out very differently if they had been charged with a different offence such as obstruction of a highway. The aggravated trespass charge apparently having fallen apart due to confusion over the boundaries of the site.

Campaigners were disappointed that one of the central planks of their argument - that Rolls Royce was breaking international law by producing parts for nuclear submarines - had been dismissed by the judge. Caroline Golbourn ruled that as a previous case involving parts for Trident had held that it was a lwaful activity, she wouldn't hear any arguments relating to its illegality.