Why Does the Media Lie? - Milan Rai

‘Why Does the Media Lie? - Applying the Chomsky/Herman Propaganda Model to the British Media’ - Talk and discussion with Milan Rai.

There is now widespread cynicism about the mass media, but few good ideas about exactly what is wrong with it. The Propaganda Model of the media developed by Noam Chomsky and Edward Herman is a compelling and well-documented critique. Thousands of pages of evidence have established that the US mass media is marred by systematic self-censorship in the service of power. The Propaganda Model offers a persuasive explanation of how this comes about.

How well does the model apply to the British media?

Milan Rai, author of numerous books including “Chomsky's Politics” and editor of Peace News, tests the model in relation to Iraq, Iran and whatever happens to be front page news on the day of the talk.

Milan has been arrested over 20 times and imprisoned four times for his anti-war activities; he's broken into half a dozen military bases; he was the first person to be prosecuted for organizing an unauthorized demonstration in the vicinity of Parliament (with Maya Anne Evans); he's been to Iraq (1998-2002) to see the truth for himself; he's spoken in Nepal, India, the US, and Canada; he won the Transport & General Workers' Union Frank Cousins Peace Award (1993). He's contributed to the Cambridge Companion to Noam Chomsky, and sits on the advisory board of the journal Chomskyan Studies.

Not to be missed! 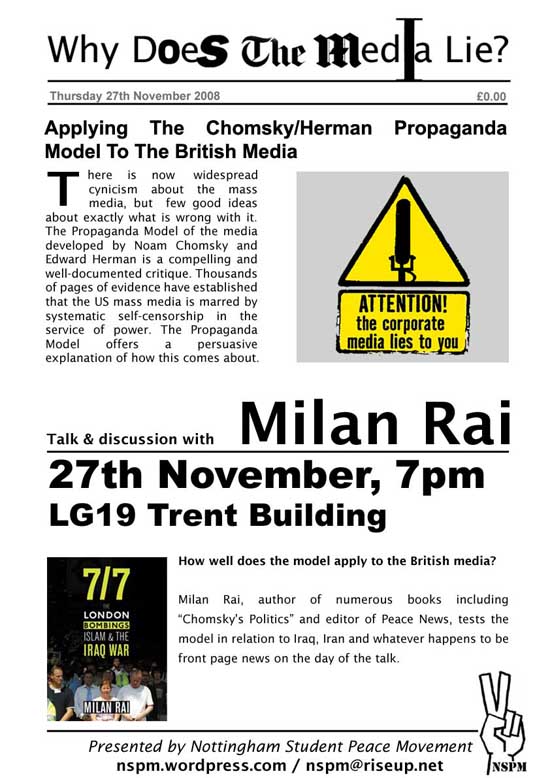 Why does the media lie?

Hope you'll join us for what will be an excellent and insightful talk.