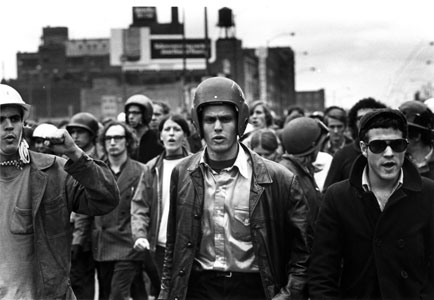 The sensational and remarkable account of ‘The Weathermen’. In 1969, a small group of leftist college student radicals announced their intentions to overthrow the U.S. government in opposition to the Vietnam War. Fuelled by outrage over racism and the Vietnam War, the Weathermen waged a low-level war against the government throughout much of the 1970s—bombing the Capitol building, breaking Timothy Leary out of prison, and evading one of the largest FBI manhunts in history. This documentary explores the rise and fall of this radical movement as former members speak candidly about the passion that drove them at the time.

Bill Ayers, a former Weatherman, recently re-entered the spotlight by way of association with Democratic presidential candidate Barack Obama. Ayers and Obama at one time lived in the same neighborhood in Chicago.

Do join us for this free screening of this awesome film.

Just to clarify for those who may not know, 'portland' refers to the Portland Building, University Park Campus.