On Tuesday 11th November at the Royal Concert Hall, Nottingham Trent University installed its first Chancellor, Sir Michael Parkinson. At the same time, NTU has formally terminated recognition of UCU in a direct attack on independent trade unionism on the campus. 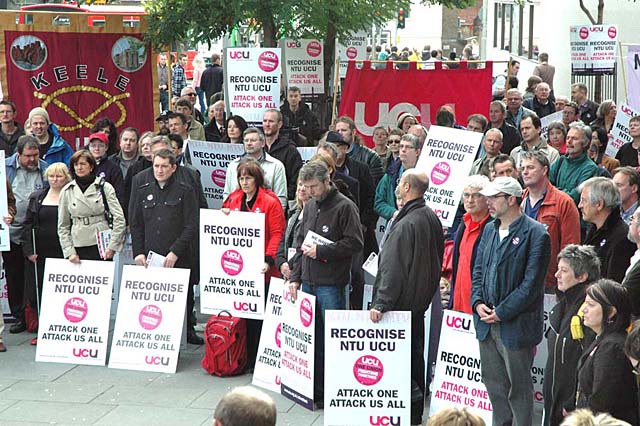 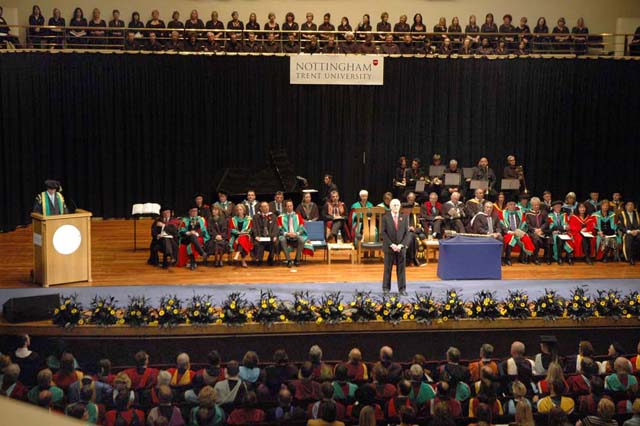 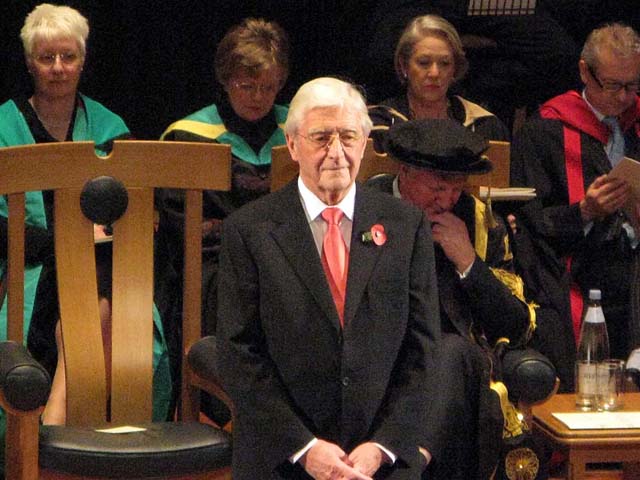 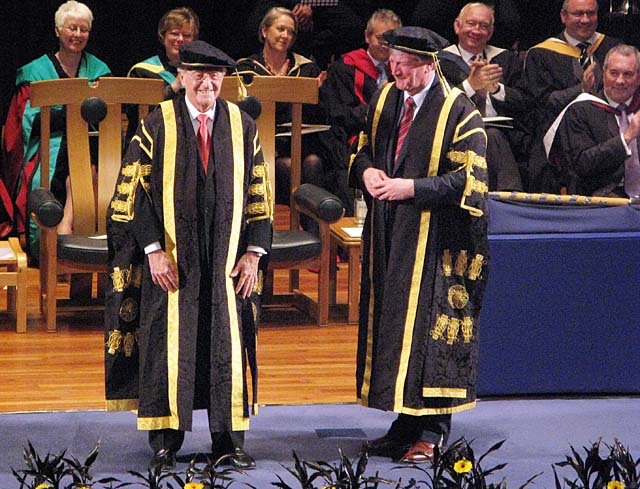 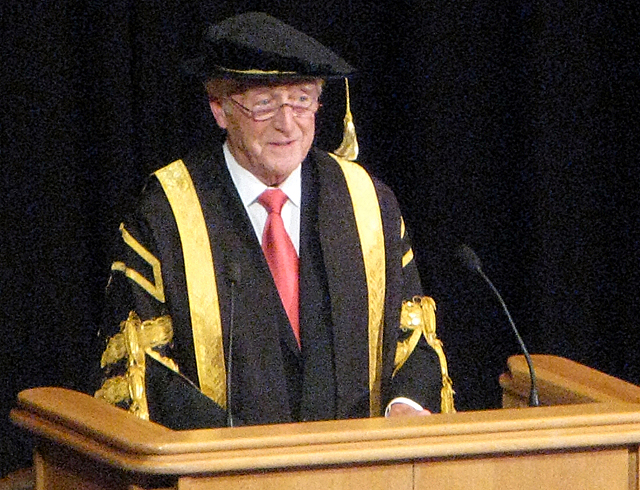 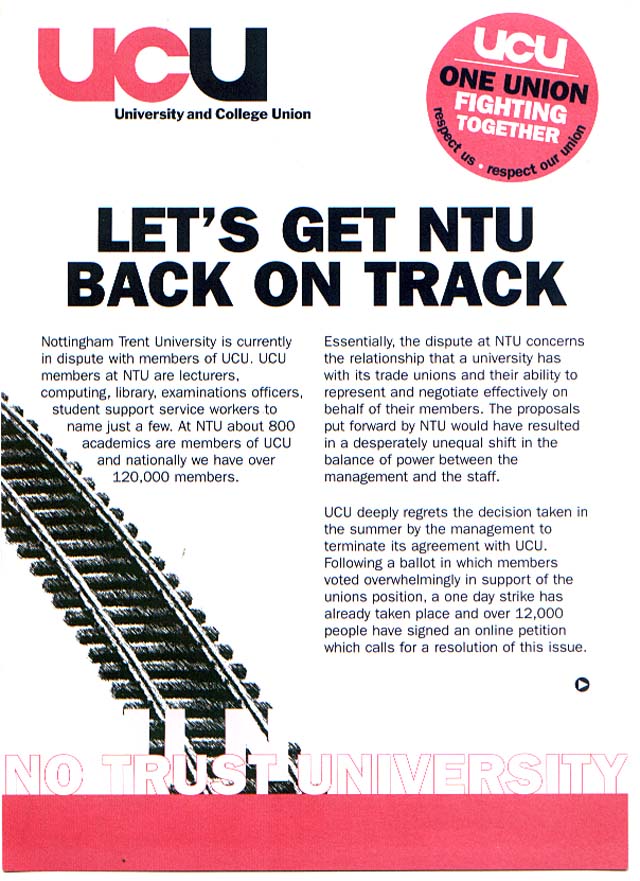 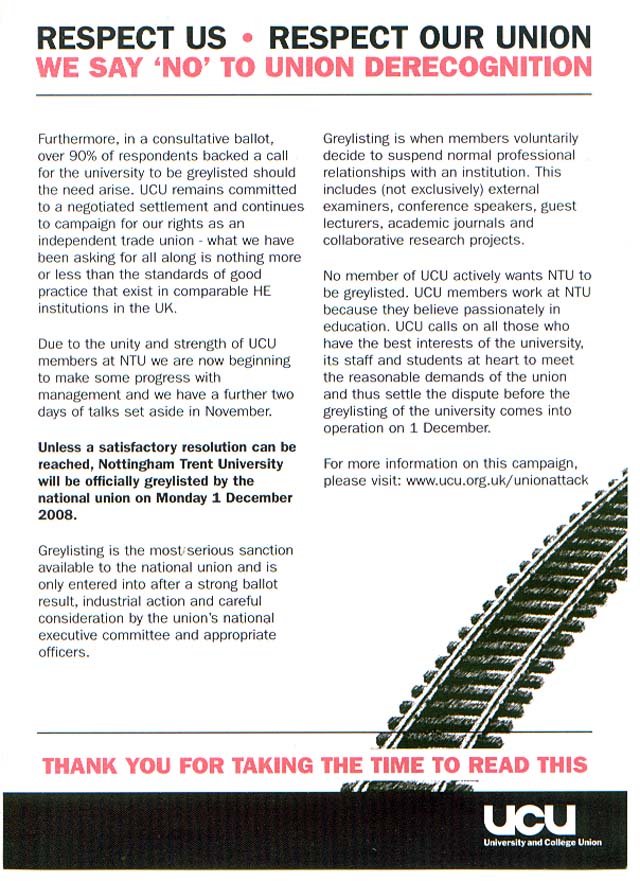 On Tuesday 11th November at the Royal Concert Hall, Nottingham Trent University installed its first Chancellor, Sir Michael Parkinson. At the same time, NTU has formally terminated recognition of UCU in a direct attack on independent trade unionism on the campus.

Earlier, on Monday 6th October 2008, staff and students from Nottingham Trent University together with hundreds of UCU members from all around the country held a national rally outside the Royal Concert Hall in Nottingham.

UCU said today that it has written to Sir Michael Parkinson CBE, to ask him to intervene in the current row at Nottingham Trent University (NTU).

UCU general secretary, Sally Hunt, said: 'The dedicated staff at NTU feel insulted and let down by the University's actions. We hope that Sir Michael will use his new influence at the institution to encourage the University to sit back down with the union and resolve the issue.

'The university's proposals are quite unique in higher education and opposition to them is far-reaching throughout the academic community. Over 12,000 people have already signed a petition condemning NTU. We strongly feel that the current impasse is not in the interests of anyone connected to NTU and we have no desire to harm its proud reputation as a leading new university.'

In an attempt to get their message across to those participating in the event, outside the venue, a number of NTU UCU members handed out this leaflet to the 2,000 plus guests explaining the current dispute between NTU and the union.

The union and has warned that if the issue cannot be resolved by the end of the month then NTU will be 'greylisted'. Greylisting is the ultimate sanction available to UCU members and is only ever used where a university or college refuses to engage in meaningful negotiations with a branch or local association. No institution has ever been greylisted in UCU's two-year history.

The union made clear today that it does not want to have to greylist NTU but warned that if it does it then it will be asking colleagues in the union, other trade unions, labour movement organisations and the international academic community to support its members at the university in any way possible including:

* non- attendance, speaking at or organising academic or other conferences at NTU
* not applying for jobs at NTU
* not giving lectures at NTU
* not accepting positions as visiting professors or researchers at NTU
* not writing for any academic journal which is edited from NTU
* not taking up new contracts as external examiners for taught courses.


For more information, please check out The University and College Union campaigns

Derecognition of UCU at NTU

Speaking as a former member of NATFHE, a predecessor of UCU, I am dismayed but not surprised at the pathetic response of the NTU UCU Branch to their derecognition by the university authorities. They say that 'greylisting' NTU is the ultimate sanction that they can bring to bear. This is not true. The ultimate sanction that the lecturers can apply is the withdrawal of their labour.

The key element in any educational organisation is the teachers. Without teachers working a school, college or university ceases to effectively function. So come on, you wankers, either take some real industrial action or stop whining and shut up.