The conference was organised as part of the “Everybody’s Talking About Climate Change” programme which is a government supported public awareness campaign run by Nottinghamshire and Derbyshire County councils. It was held last Saturday (15th November) at the Friends Meeting House In Nottingham . 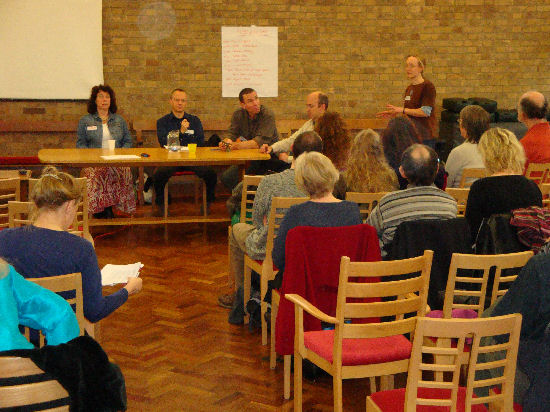 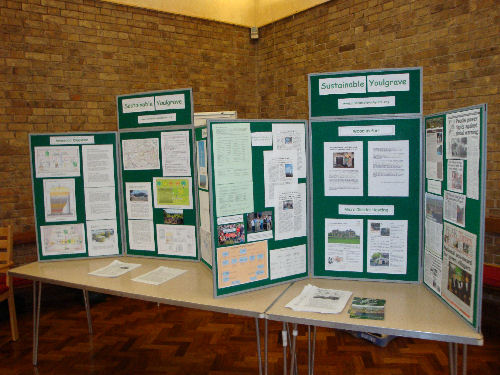 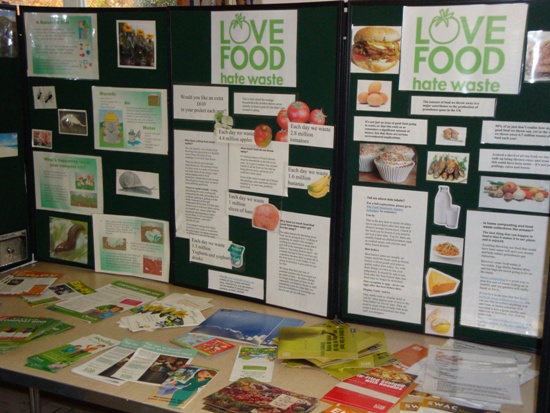 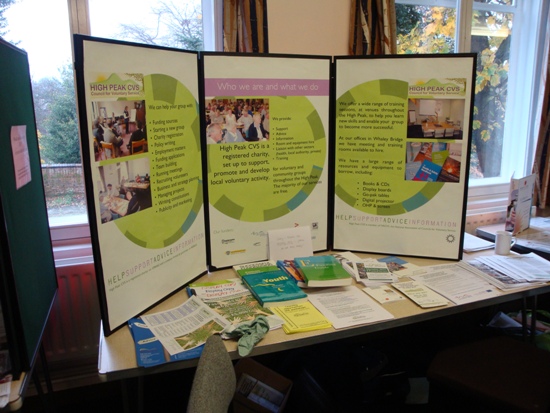 The conference was free and open to anybody and included refreshments and an excellent cooked vegan lunch provided by the Harvest Café, at Eco Works

The 43 local groups who attended represented a wide range of interests, including, to give a flavour, Climate Action Network, Ashbrook Junior School, Long Eaton University of the3rd Age, FoE, Greenpeace, Groundwork, Nottingham Against New Coal and a number of Transition groups.

During the morning we were able to listen to interesting presentations by three invited speakers.

Andrew McCloy explained how SustainableYoulgreave came about as a result of two individuals chatting over a field fence about the need to create a sustainable future, but their lack of faith in politicians to actually do anything. They started by holding a public meeting in the village They followed this up with a questionnaire survey amongst the local community of 1000 people. It was decided to focus initially on energy saving, as this would have wide instant appeal.

Practical actions so far are based on local energy production including
water power as there have traditionally been water mills in the area, and a community anaerobic digester, fuelled by household green waste and slurry from the local dairy farms.

Nick Martin from Hockerton Housing project spoke of Sustainable Hockerton and gave an insightful and informative description of the issues of wind-power. Nick explained that small wind generators were pretty much a waste of money (despite what B&Q claim!) and also described the issue of how output is affected by location, rotor size, the issue of getting enough wind and avoiding areas of turbulence which will reduce efficiency.

His recounting of the problems of getting planning permission for the first wind turbine due to objections based on misinformation were enlightening. It was also very interesting to hear that there were no objections when an application for a second wind generator we submitted a few years after installation of the first. While the first application had take several years and a number of appeals the second went through in a matter of weeks

The third presentation was by Esther Jones of High Peak Community and Voluntary Support. Esther described the support that is available from local authorities for local climate action projects. This includes advise on funding, training, business planning and governance, information, liaison/representation and practical skills such as help with a website.

Esther also explained that there are databases of funders, funders’ fairs and funding surgeries. To find out what is available in Nottingham you can start with


The afternoon was used as an Open Space session and this worked very successfully. The plan was to run a number of groups in parallel but firstly ‘delegates’ were invited to propose the issues that they wanted to cover, either to share or get ideas. The proposers stayed with their group and reported back at the end but others were able to move between groups to share ideas. This proved a efficient way of ‘networking’ with all the other attendees and it was clear from the feedback at the end that many new contacts had been made and new ideas shared.

Conclusion
So what did we come away with at the end of the day? In a general sense it was certainly inspiring and motivating to see so many local individuals and groups engaged in practical projects and the genuine concern for creating a sustainable future; it recharges one’s batteries. On a practical level there was a lot of information and advice from other groups and individuals, not only those who gave presentations in the morning but also from those attending as delegates. Perhaps the greatest outcome is the opportunity such events provide to meet face to face with other people to form alliances and support networks.

But, are we just kidding ourselves? Will such activities bring about the scale of change we need if we are to have any realistic chance of halting runaway climate change? Or is it a diversion, which makes us feel we are doing something and diverts our energies and attention from the elephant in the room. A diversion in which the authorities can claim to be taking action. Is a bit of funding for local groups and some local authority initiatives going to stop the expansion of coal fired power stations. How does it fit with the rapid and suicidal opening of new coal mines?

The elephant in the room is the ticking clock which currently reads 97 just months, and counting, to the climate tipping point

Please resize your pics to 550 pixels width maximum. Otherwise we have to do your work for you.

One of Notts IMC

open cast creates hardly any jobs, creates pollution to water tables& air pollution. Already in shipley pumps have to run almost forever to stop pollution from coming out of old pits, this maybe able to be used for geothermal though, Iam hinting to Coal authority in Mansfield=UK coal this is a good idea.
As for clean coal, its expensive & the fly ash isnt clean, there are many cases of this too polluting drinking water.
Geothermal & sustainable wood chp are cheaper for heating & industry than just about all the other options& create 10 times less carbon.Wave,wind,tidal.
Those supporting coal who say only other option is nuclear, are following false government propaganda, Charcoal not dole & large scale geothermal are far safer+ easier jobs.

Apologies to the poster

Sorry about the tone of my previous comment - I realise it sounded a bit harsh. I'm sure that Dean made a mistake as two of his pictures had been resized. However, please can all site users try to keep their pictures to a minimum width of 550 pixels when posting. Ta.