FULL CIRCLE - from weapons to wars to refugees

To highlight the link between the arms trade and refugees, Shut Down H&K and No Borders Nottingham will be holding a demonstration on Saturday 29th November at 12:30 on Old Market Square in Nottingham called FULL CIRCLE – from weapons to wars to refugees. 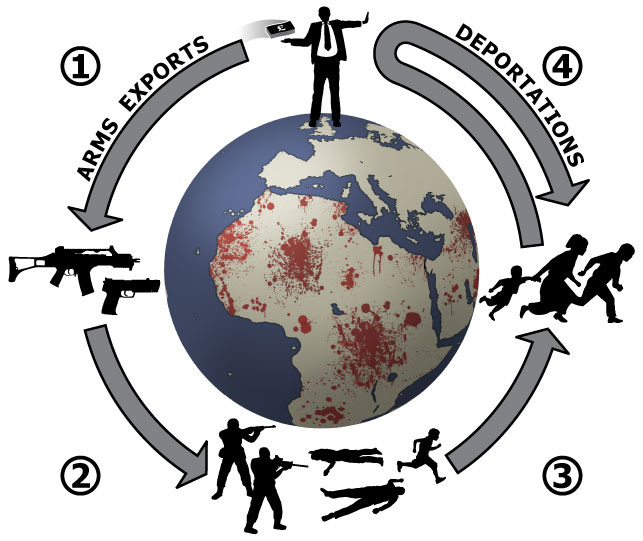 In short, the policies of successive UK governments have on one hand contributed to suffering on a global scale, and on the other hand refused to take responsibility for the consequences. It is time to expose and confront this vicious circle. Join us on Market Square as we call for an end to exporting guns and deporting people

Bring drums, placards, friends, etc. Weather permitting, we will be holding a die-in to represent the consequences of H&K’s trade, and the horrors from which refugees have fled. If you want to take part in the die-in, then dress warmly with outer clothes that can be splashed with washable fake blood.

Shut down Heckler & Koch! Freedom of movement and the right to remain for all! No guns, no borders!

The square is very crowded, what with the ice rink and the Christmas market, so we’re not sure exactly where we’ll take a stand. Look out for us when you get there. We may be near the junction of King St and Queen St, or at the opposite end of the square from the Council House.

We hope that the weather will be suitable and that enough people will be up for taking part in a die-in. However, for those who want to apply some fake blood, please be aware that it may not wash out of some clothes. Therefore it would be a good idea to bring a garment that you’re not too attached to, to which you can apply fake blood before putting it on over the rest of your clothes.