The following letter was forwarded to ELP

Note: The letter was received at the start of the month, but as it was not posted here, as requested, thought it would be a good time for it. Here it is: 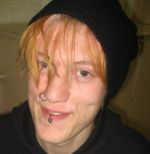 First of all, I'd like to say a big thanks to everybody who has written letters of support and sent stamps, POs, writing materials in - its really appreciated and has helped me 'settle in' to prison life.

One thing that sticks in my mind, as the CPS make up their lies and try to fabricate to prove themselves, is that there is a clear line between what is right and wrong and what the vivisectionists do, what the police, government and court try to defend is certainly in the wrong.

As they try to throw proverbial bricks at the Animal Rights movement, try to imprison us for our views and beliefs. One things they can not and will not accept is that, yes they may have 14 Uk activists in prison, but there are hundreds, thousands out there who are willing to pick up the megaphones, placards and leaflets and continue where we left off and fight for those that are restrained in laboraties and dying on cage floors.

The Animal Rights movement is global, with groups in every corner of the globe fighting for the same goal, of equality, compared to our opponents, run by NETCU based in Huntingdon Police Station and who only care for one thing - money.

Whether its that blood soaked cash filling their pockets or those of animal abusers that is what they protect and I'm sure when I say if we had the money they'd be fighting on 'our side'? But no matter what is thrown at us, we will always prevail, always win because we have good on our side and evil is behind the barbed wire fences, razor wire and CCTV of labs and breeders in this country and across the globe.

And when I hear peole saying we have impossible goals, I think of what has been acheived. Twenty years ago there were over 30 companies in the UK breeding animals to be tortured in experiments, now there are just four! We are winning outright, we are defending those beagles, monkeys, rabbits, rats, mice and other animals, set to be mutilated at the hands of thugs and that is why we are getting the reaction we are from the government and their lackies.

All the best and keep on fighting for what is right.

Is Luke still remanded ? the vpsg web site has no updated details .

Yes, Luke is still at Lincoln prison on remand

Luke is still on remand at Lincoln prison, there is no change.