With the Israeli assault on Gaza showing no signs of letting up, there are two further Gaza solidarity events in Nottingham this coming Friday and Saturday. These follow on from a well-attended demonstration in the Market Square late last year and a busy public meeting at Bobbers Mill Community Centre last weekend. 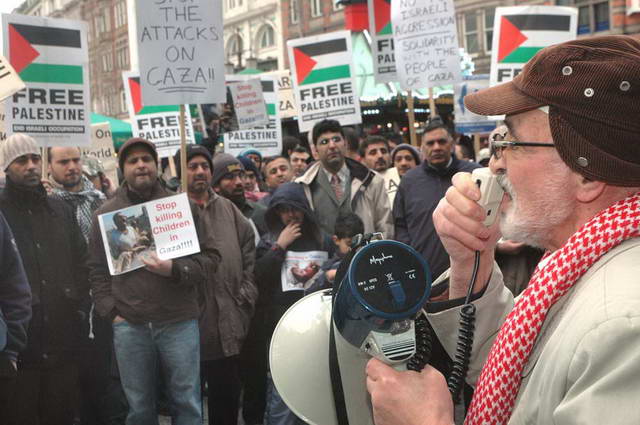 STOP THE KILLING IN GAZA!

There will be a Protest Vigil outside the Council House in the Old Market Square on Friday evening (Friday, 16 January).

The main event will be at 6pm but we want people to gather from 5:30pm, or to come straight from work. There will be speakers as we are gathering.

STOP THE KILLING IN GAZA!

ISRAEL OUT OF GAZA!

Nottingham Stop the War Coalition has called a Protest Demonstration through Nottingham on Saturday, 17 January. The march is supported by all the Nottingham Mosques.

We will assemble with our banners and placards on the Forest Recreation Ground at 10:30am (on Saturday) and march down the Mansfield Road into the Market Square for a rally outside the Council House.

We expect the rally to finish around 1pm.

ISRAEL OUT OF GAZA!

There will be a demonstration outside UAV Engines, of Lichfield, Staffordshire, on Monday 19th January, regarding evidence that has been revealed that the company is building engines that are used in Israel's military drones that are aiding the attacks on Gaza.

UAV engines (known as UEL) is owned by the Israel drone specialists Silver Arrow, a subsidary of the Israeli defence contractor Elbit systems. One of its rotary Wankel engines is used in Elbit's Hermes 450 drone. A version of the 450 makes up a squadron of the Israeli air force and has been seen over Gaza in the current conflict, being used for surveillance and targeting for Israel's F-16 strike fighters. Elbit's own website suggests that the Lichfield factory produces engines for the Hermes.

The demonstration will be calling for an end to arms sales to Israel and an end to Israeli violent repression of the Palestinian people.

The demonstration will be held outside the industrial unit at midday. Meet at Shenstone Railway Station at 11.15 a.m. The factory is approximately 11 minutes walk from the station along Lynn Lane, heading out of town (take the first left after Birch Brook lane).

Transport will be leaving from the Sumac Centre in Nottingham (245 Gladstone Street, Forest Fields,NG7 6HX) at 9.30 a.m. To find out more, to offer help with transport etc, or to book transport Tel: Kirsty on 0798 374 3894. Bring banners,things to make noise,etc..Spread the word...