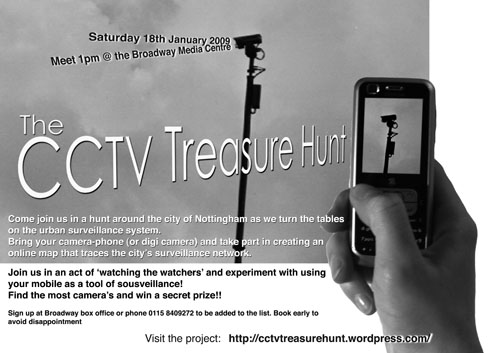 Can you explain why it is insane? If you were mugged and the person was caught because of cctv would you complain?

Hmmmm .... okay, so what planet have you been residing on these last 13 years? Cannot be England, surely.


Have you not yet come across the admission by the police that actually CCTV cameras have not made much contribution to the resolution of cases of common street crimes? This was reported for both London (with its vast array of cameras) and Nottingham (with its gun-crime paranoia). I am too lazy to source out the info, but with a little surfing to Scroogle, you will probably find the background stories.

Ruby, your information is sorely lacking ... what kind of bullshit do you think that you can peddle and get away with? The crap stops here: most CCTV footage isn't even usable in court. It is all about surveillance of the public, and very rarely works as a deterrent against crime.


Get a grip on the situation, gal

Ruby why are you posting on Indymedia?

Stick with the Mail, its definitely where you are at!!

You've just contradicted yourself entirely. In the space of a few sentences you say it is rarely of evidential use, but then you say it is used to watch the public.

Surely if the quality was that bad it couldn't be used for anything....?


CCTV evidence is used, it has prevented crime and it has detected crimes. Whilst it might not be as much as we'd hope, it has still helped bring criminals to justice.

Out of curiosity, what sort of surveillance activity do you think it is used for? Do you honestly believe that someone collects the tapes in the dead of night and spends days watching them for evidence of treasonous behaviour.....?

Do you really think anyone in authority actually gives a toss what the general public do as they go about their daily business....?

I just wonder why the cameras did not work on 7/7, any suggestions Ruby?

Erm, the CCTV was working on 7/7. The movements of the bombers were tracked all the way back to the train station they left their car in North of London.

You can also see them in the days before the event on a dummy run.

Get your facts right.

What about the CCTV on the bus?

And how did they get to London on time if their train was cancelled?

What about the famous Photoshoped (CCTV) picture released by the police?

Am I asking too many questions?

Police state is far scarier than being mugged

I like the idea of the project, however the flyer is a bit confusing.

The 18th of January is a Sunday. So did you mean Saturday 17th January, or Sunday 18th January? Presumably it's the Sunday, since this was posted on the 17th and talks about "tomorrow" as the 18th, but I couldn't have gleaned that from the flyer.

Also, using your mobile as a tool of "sousveillance"...!?

@ Bob and Ruby: CCTV is used to watch the public - eg. to quickly suppress "unauthorised" protests and so on. It is rarely of any use either as an effective preventative measure against street crime (which just moves elsewhere) or in convicting people (any footage captured is often totally crap). This has been shown to be the case time and time again.

A few years ago, I was mugged in the early evening literally right in front of a CCTV camera, and the footage captured was worse than useless! You could just about make out four guys dressed in black mugging somebody in the dark... well, that's great innit!

I for one don't want to live in a surveillance society. The perception of "being watched" is what the state wants us to feel - and that is a far more powerful tool (for them, against the vast majority of people) than the actual video footage is. It's not about catching "criminals" or preventing "crime" - it's about letting us know who is boss, at all times.

Just look around you! Britain in 2009 - the government is trying harder than ever to let the general public know who is boss.

Surely that relationship is supposed to be the other way around? Which of course, it has never been - but now more than ever, the totalitarianism and unaccountability of the state is completely overt. That should be enough to worry anybody with an ounce of sense!

I have been mugged twice in my life, and it's not in the least bit scary compared to living in the world's foremost police state. Wake up!

I agree with the feeling that cctv is more to do this 1984-style control than genuine crime preventing/detection. It certainly hasn't prevented a number of friends being mugged over the last few years, and in none of the incidents did cctv, or any other police activity, bring the perpetrators to 'justice'.

The previous comment seems to suggest that 'sousveillance' is a misprint, however Wikipedia suggests that 'Sousveillance typically involves community-based recording from first person perspectives', related to 'Inverse surveillance - typically an activity undertaken by those who are generally the subject of surveillance'. This seems like a very valid form of community activism. Indymedia is full of pictures of people watching the watchers in an attempt to monitor the activities of the notorious Forward Intelligence Team (FIT-Squads) and their vampiric brethren NECTU (

http://netcu.wordpress.com/about/). This seem like a good way to highlight those snoops thay you don't see hiding away in cctv control rooms.

The corruption of the police evidence gathering process has been clearly seen in the recent dismissal of a case against climate activists in Nottingham. The police claimed to have no filmed evidence until prompted by defence footage showing the senior police officer standing alongside 'FIT' team filming the incident. Even then they failed to disclose the existence of the DVD from the Crown Persecution Service, before giving up when their own barrister final saw it and threw up her hands in despair at the trial. See

See more on 'Indymedia and British Intelligence Services' at

https://www0.indymedia.org.uk/en/2007/02/361290.html
Surveillance at Demo at Heckler & Koch weapons manufacturers HQ in Nottingham at


btw. lets not fret too much about seemingly ill-informed comment, that's the price we pay for open publishing. The best way to counter those that may seem like trolls looking for an argument, but who may just be genuinely misguided, is to either ignore them or to post reasoned comment to further the content of the original article.

"Sousveillance" - my apologies to the original poster! I'd never heard of that (very apt) neologism before! Indeed, I've already done some of that myself without even knowing it had a proper name! Excellent!

I just assumed it was a typo as the date mistake on the flyer made jump to the conclusion that there might be other mistakes too.

Why oh why oh why do schools need new 12ft fences around them? Is it really to keep out rampant sex fiends?

Biggin up Patrick McGoohan, who wrote and starred in "the Prisoner", and died last week aged 80.