McLIBEL! The Story of Two People who Refused to say ‘Sorry’!
The postman and gardener who took on McDonald's. And won. 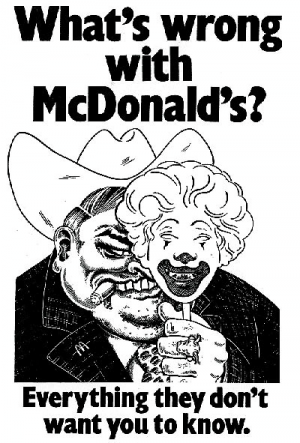 The Flier They Could Not Rip Up!

Two activists take on McDonald's in the longest trial in English history. McLibel is the inside story of how a single father and a part-time bar worker took on the McDonald's Corporation.

Filmed over three years, the documentary follows Helen Steel and Dave Morris as they are transformed from anonymous campaigners against the fast food giant into unlikely global heroes.

Struggling to defend themselves in the longest trial in English history, the pair face infiltration by spies, secret meetings with corporate executives, 40,000 pages of background reading and a visit from Ronald McDonald.

Using interviews with witnesses and reconstructions of key moments in court, the film examines the main issues of the trial - nutrition, animals, advertising, employment, the environment - and the implications for freedom of speech.

McLibel is not about hamburgers. It is about the power multinational corporations wield over our everyday lives and two unlikely heroes who are changing McWorld.


The European Court of Human Rights in Strasbourg declared that the notorious and long running McLibel case was in breach of the right to a fair trial and right to freedom of expression, thereby voiding any solace that McNasty may have enjoyed from the trial.

The Court ruled that UK laws had failed to protect the public’s right to criticise massive corporations whose business practices can affect people’s lives, health and the environment.

Justice Bell, presiding at the High Court McLibel Trial, had ruled that McDonald's marketing has "pretended to a positive nutritional benefit which their food did not match"; that they "exploit children"; are "culpably responsible for animal cruelty" and "pay low wages".

The Appeal court added that it was fair comment that their employees worldwide "do badly in terms of pay and conditions", and true that "if one eats enough McDonald's food" this may well lead to "the very real risk of heart disease."

Meanwhile after spending £10million to suppress free speach, McDonalds find that the most widely distributed protest leaflet ever, continues to be distributed worldwide...