Four Nottingham anti-arms trade campaigners are visiting the German town of Oberndorf-am-Neckar in early March to attend a major protest at the international headquarters of arms manufacturer Heckler & Koch, whose British branch is based in Nottingham. 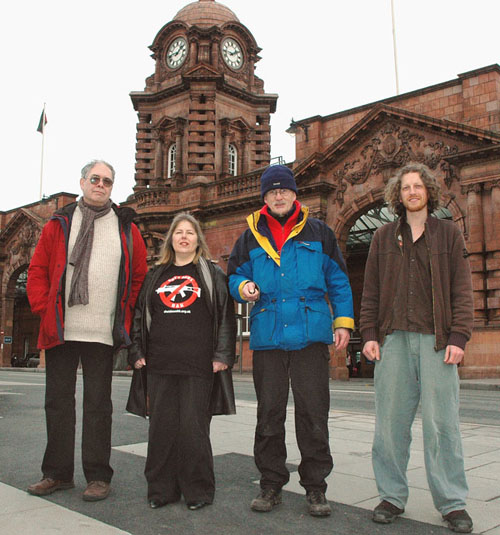 H&K in the hands of a child soldier, a Taliban, Serbian police and Nepali army

The Nottingham activists will be joining their German counterparts to protest about Heckler & Koch’s role in supplying arms used in murderous conflcts around the world. It has been revealed that H&K guns have been used by the Janjaweed militias in Darfur, by Blackwater mercenaries in Iraq, by the Georgian army in South Ossetia, and by criminal gangs in the UK.

The four will represent a Nottingham-based campaign called Shut Down H&K, which has been building friendship links with German organisations who also oppose the arms trade. A German peace group caled the Armaments Information Office (RIB) invited them to attend the demonstration and offered to pay their travel expenses.

The March 7th protest has been organised by German campaign groups to pre-empt H&K’s 60th anniversary celebrations. The theme of the demonstration will be “Masquerade of Death” and the marchers will be split into two columns – one mourners dressed in black to commemorate the victims of war, and one dressed as arms dealers celebrating their booming business. There will also be a rally at which the delegation will deliver a speech about the Nottingham campaign against Heckler & Koch.

Perhaps the local media will finally realise that this campaign isn't going away, except for a few days forging international links. The time has surely come for local papers, tv and radio editors (who know who they are) to listen to their audience, rather than their 'masters' and give serous coverage to the issue of concern. Meanwhile big-up Indymedia for continuing to cover the news where others fear to tread.

Good on you guys, go get 'em! Looking forward to reports from the exchange. Will you take some audio for Riseup! Radio as well?

Good on you all ! Remember, the only sustainable way to get to and from the protest is by cycling or walking. Please think of the environmet if you are considering going by air, reconsider. Can you go by coach instead ? Good luck !

Not walking or skipping, but taking trains.