The campaign against this years BNP Red, White and Blue festival (RWB) is well under way. On Monday morning BNP man Alan Warner woke up to find himself locked into his own farmyard and the words "Racist BNP scum" sprayed on his wall. Alan was the enthusiastic host of this year's RWB and wants to have it on his farm on Codnor-Denby lane again this year. Sorry Alan - it aint gonna happen. 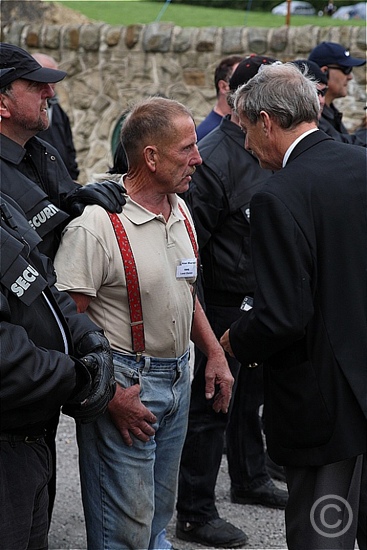 When rednecks attack... Alan Warner is restrained during the 2008 RWB

Warner was targetted for similar treatment last year in the run up to the 2008 RWB.

The BNP is a whites only organisation who say they want all ethnic minorities to leave the country. Their hardcore follow fascist ideology and many have convictions for racist violence. They will be opposed wherever they try to organise.

The massively unpopular RWB has scarred local communities for a number of years now and enough is enough. The so-called "family festival" features Nazi marching music until late at night, racist comedy and all kinds of violence between pissed BNPers. Local villages have been overrun by drunk skinhead thugs who made it a nightmare for local residents. Last years event was refused an entertainment license by the local council and was besieged by protests. As a result not many white supremacist families bothered coming and the event was a big disappointment for the party.

The BNP and their fascist festival are not coming back to this area!

I can't quite put my finger on it, but I'm detecting homoerotic undertones to this picture of the neo-Nazi and the cops! Maybe it's just the cold weather. ;-)

Farmer?,Ive known farmers in the area for years,Warner is just a dodgy pisshead

who wheels & deals with nazis whilst ripping off anyone not following his version of the master race.
Is this article accurate though, I though the RWB was somewhere else this year?????

It probably is somewhere else, article says this guy wants it but it "aint gonna happen". Thankfully the BNP turned on itself and lost its main reason for coming here, Sadie Graham (who also got accused of leaking us the membership list).

He isn't being held back by police BTW, they're BNP security, different uniforms and armbands. A tad more explicit than regular police gear - a bit like BNP ideology. He seems, rather strangely, to be arguing with another BNP pensioner. The homoeroticism is in the leather gloves and lederhosen I reckon. If you really want homoerotic though, check out the work of Nazi sculptor Arno Breker. It's barely even disguised!

Essex apparently think they're going to get it this year.

But the move is unconfirmed. Meaning it could be back in Derbyshire again.

" Mr Darby also confirmed that party chairman Nick Griffin is a fan of the countryside in the district."
Awe how sweet. [vomit alert]