Face life in jail... or three days in Punishment Park

On Thursday 12th March, 7pm in the Hallward Library Screening room, University Park, Nottingham Student Peace Movement will be showing the classic film Punishment Park. The film raises the difficult question of how to face state repression - is violence or pacifism the answer? How will we respond when the authorities come for us? 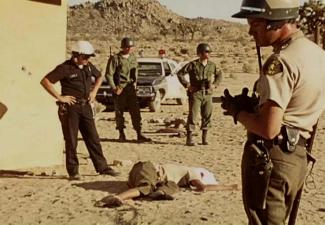 The movie takes place in 1970. The Vietnam War is escalating and United States President Richard Nixon has just decided on a "secret" bombing campaign in Cambodia. Faced with a growing anti-war movement, President Nixon decrees a state of emergency based on the McCarran Internal Security Act of 1950, which authorizes federal authorities, without reference to Congress, to detain persons judged to be a "risk to internal security". Members from the anti-war movement, civil rights movement, feminist movement, conscientious objectors, and Communist party, mostly University students, are arrested and face an emergency tribunal made up of community members. With state and federal jails at their top capacity, the convicted face the option of spending their full conviction time in federal prison or three days at Punishment Park. There, they will have to traverse 60 miles of the hot California desert in three days, without water or food, while being chased by National Guardsmen and law enforcement officers as part of their field training. If they succeed and reach the American flag at the end of the course, they will be set free. If they fail by getting "arrested", they will serve the remainder of their sentence in federal prison.

If you're coming along...

...you'll need to find a student who will lend you their ID card to get into Hallward Library.