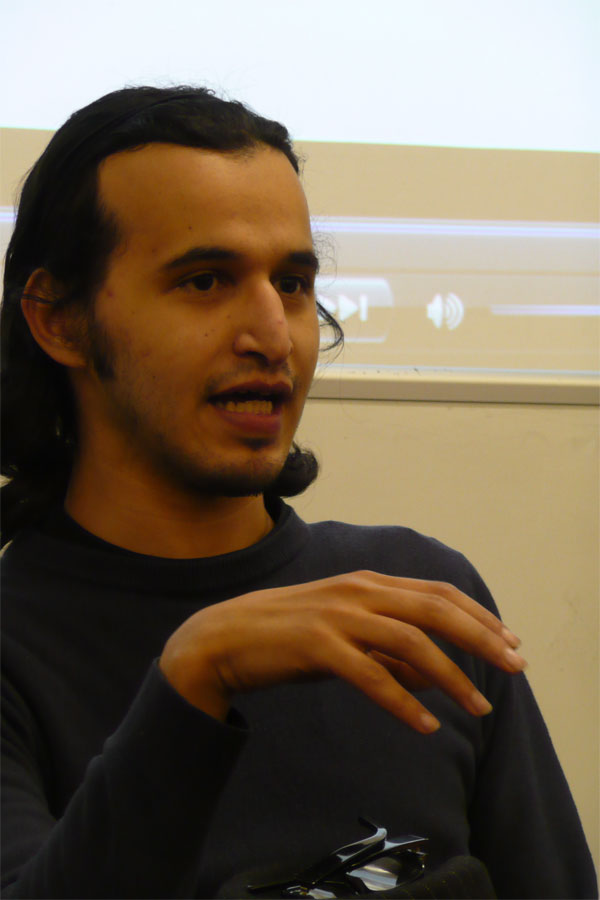 hicham at a recent conference in london

hicham yezza has been a strong progressive force in the student community, especially at nottingham university where he founded the excellent anti-war "ceasefire" magazine.

he came to national attention when he was arrested last year under terrorism laws after a so-called "al-qaeda training manual" was discovered on his computer.

in fact the material was a freely available document (anyone can purchase it from amazon) and was legitimately part of research material for a PhD proposal that he was helping a fellow student, rizwaan sabir with.

the authorities raided his home, took computers and other materials, held him for questioning for days, and failing to substantiate any sort of terrorist connection or plot, they then found a small irregularity in his immigration status and tried to fast-track him out of the country.

this failed due to a nationwide outcry from friends, colleagues, academics, civil rights campaigners, anti-war campaigners and even newspapers.

since then, he has been guest at many conferences where he speaks as eloquently as he writes, about global issues, freedom, peace and politics.

at northampton crown court last week, his lawyer pointed out that he has lived in britain for 14 years, has no family in his birthplace algeria, and has an exemplary record in his local community. hicham has admitted that he made a mistake in an immigration interview in 2007, but it is clear that there was no material gain from it. had all his information been correct, there was no doubt he would still have received the permanent residence in this country he was seeking. the whole 'offence' is really a technicality.

despite this, the judge sentenced hicham to nine months imprisonment, and he will have a criminal record for the rest of his life.

is there any suspicion that this case and the extraordinary sentence imposed may be political?

But hoping for a prompt and successful appeal, it was a wrongful conviction to begin with.

'They' are kicking things off 4 martial law, re:this and Anglian soldiers

Now comes the next stage, the next act in the bankers bid for absolute control. Imprisoning the good and flaunting the crimes of the bankers through govt by parading soldiers through Luton, tomorrow Watford and where is stop the war, that was a joke as they are so intentionally absent in all important ways. But again LUTON, an economically deprived areas where there are high numbers of muslims, a sikh mayor standing shoulder to shoulder with the soldiers and a high recruitment area for the military to boot. Imprisonment of this very beautiful human being, I'm not shocked, it is a sign of what to expect if people do not act (and peacefully) to support all the angry, sad, imprisoned, maimed, murdered, bereaved casualties of this barbarism and diffuse this anger bomb which the government is trying to explode for the purposes of the bankers agenda. www.tpuc.org

Here he is intereviewed on our radio show

What the ... is this peaceful and highly intelligent young man doing in jail?

For more information...
Explains what happened in his own words
Starts at about 15 mins in

http://blog.dialectradio.org/?p=168
Here he is intereviewed on our radio show

Appalling behaviour by 'High Level' Racists at Nottingham University has led here to a blatant miscarriage of Justice.