The Demo Project at the Hand and Heart - Thurs 12th March 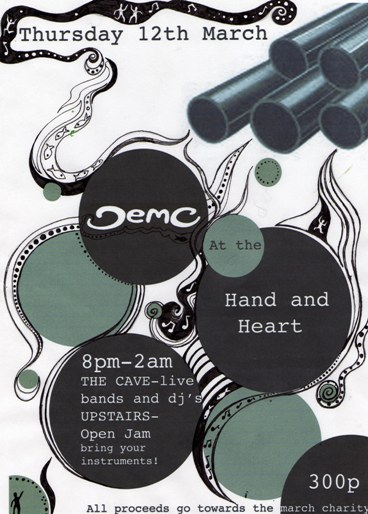 We will be raising money for Rossport Solidarity:

Since late 2000 there has been an on-going attempt by multinationals and the Irish state to devastate a remote coastal area of county Mayo with a toxic refinery and a high pressure production gas pipeline. Since then there has been an ongoing struggle to keep Shell out of Mayo… www.struggle.ws/rsc

The Hand and Heart is a lush pub just down from Canning Circus. This'll be a night of excellent ale, joyfull jamming, creative chatter and freeing of feet PLUS we'll have our own Demo Cyder!


UPSTAIRS:
Nice Big Open Jam...bring your instruments, or use some we'll have spare!
And some lovely films... 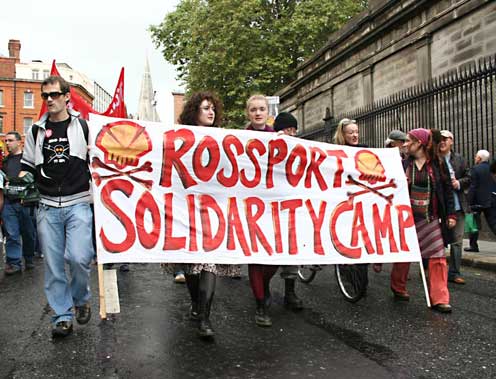 Great to see that Demo Club is reinventing itself into a number of new venues, and is still a vibrant project promoting such amazing good causes.


Members of the Rossport solidarity camp recently visited Nottingham's Sumac Centre as part of their UK speaking tour, with talks & films about the battle against Shell in Co.Mayo Ireland. (

The world's largest pipe laying ship, the Solitaire was due back in Ireland this Spring. Last year it had to abandon efforts to lay Shell's controversial raw gas pipeline after it was damaged in rough weather. For weeks the local community and supporters took direct action to stop the pipe-laying work both on land and at sea. This year even more people are needed to join the community struggle against Shell.

Get in touch with Nottingham supporters of the Rossport campaign via


Recent campaign fliers are linked from

http://www.veggies.org.uk/event.php?ref=611 and the book 'Our Story: The Rossport 5' is available from Veggies bookstall at Sumac.

btw
The full address for the Hand and Heart, just down from Canning Circus, is 65 Derby Road, Nottingham, NG1 5BA

The Hand and Heart is one of Nottingham's most famous pubs and has been around for nearly 200 years.

The pub is located on Derby Road. It's built in to sandstone caves and has both Georgian and Victorian features.