On Monday 9th March, city council workers protested in Market Square against proposed cuts at the council which would see some 400 people laid off. The protest was several hundred strong and attracted particular attention in the local media because of the presence of film actor Samantha Morton, who was herself brought up in one of the council's children homes.

The evening after the protest and with no apparent regard for it whatsoever, Councillors passed the budget without amendment, confirming that 366 jobs would be cut with a further 333 vacant positions being axed. Inevitably, the council is now actively engaged in spinning the budget as an investment, an interpretation rejected by the unions. 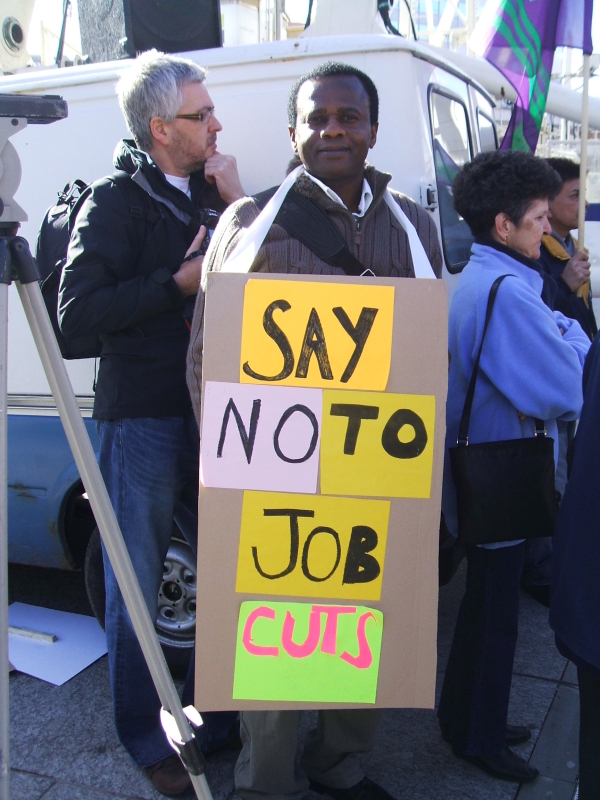 Monday was a busy day in Market Square. As well as the demonstration there was also a fifth birthday party for the tram with a orld record attempt to get more people doing simultaneous "high fives" than had ever been achieved before. They'd even invited Geoff Hoon. Those of a more conspiratorial nature inevitably wondered if this was more than a coincidence and in fact an attempt by the council to deflect attention from the protesters.

This demonstration followed another in early February and forms part of a wider campaign being waged by the unions against the cuts. This was smaller than the more recent event. Numbers may have been increased and the anger felt by council workers was certainly not helped by the manner in which the scale of the cuts was announced by deputy council leader Graham Chapman who revealed the £12m in cuts live on the radio without giving affected staff any prior notice. This is yet another example of the distasteful combination of authoritarianism and incompetence which characterises the leaders of Nottingham City Council. This is nothing new and has been documented at some length on Notts Indymedia, and now appears to have been confirmed by a report the council spent more than £5,000 trying to prevent the publication of.