Protesters from around the north of England gathered in Scunthorpe on Sunday 15 March to voice their opposition to the Great British Circus and its enslavement of wild animals. There is no chance of anything resembling a natural life for the elephants, lions, tigers, and others paraded around by the circus, which has finished its run in Scunthorpe and is now moving on to Louth, Skegness, and beyond. Protests have been following it every step of the way. 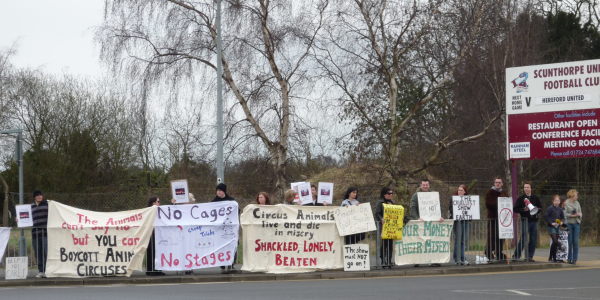 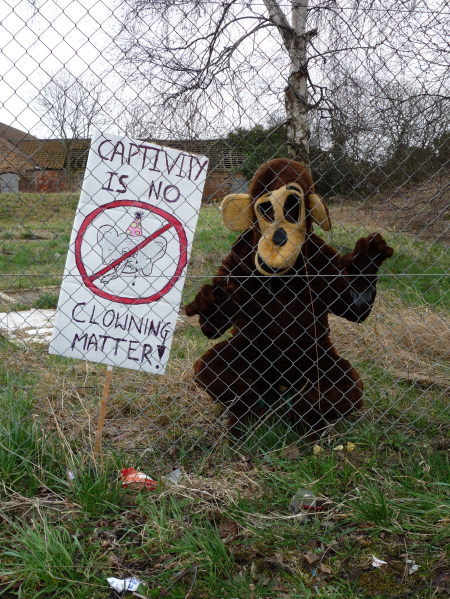 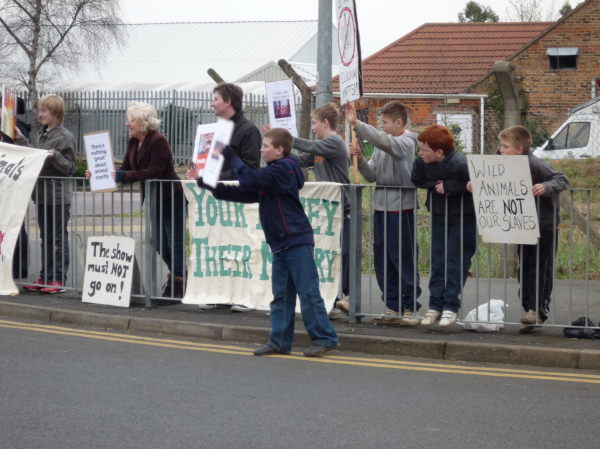 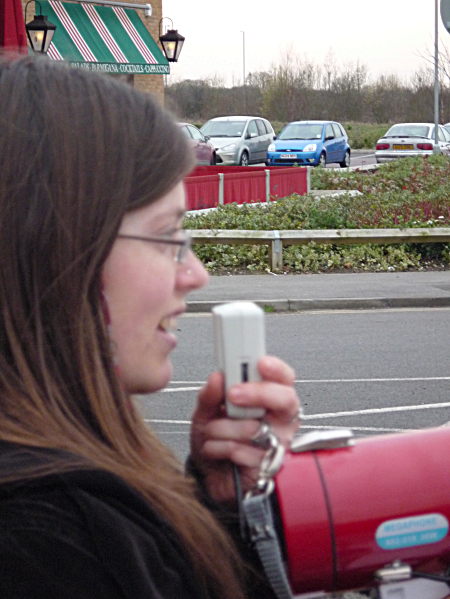 The Great British Circus, one of the biggest wild animal circuses in the country, was hit by a protest at its last performance in Scunthorpe on Sunday.

Animal rights activists from around the north of England gathered alongside concerned locals at Scunthorpe United's football stadium with megaphones, banners, placards, and leaflets to make lots of noise and send out a strong message to the people of the Lincolnshire town about the plight of circus animals. Chris, a protester, said: "We had a good turnout today and plenty of media attention. It's clear from the reaction provoked by the continued use of wild animals in circuses that there is firm determination from the full range of animal rights and welfare campaigners to put an end to this cruel practice."

The Great British Circus this year introduced three new elephants to its 'cast' of wild animals (tigers, lions, camels, etc.), the first time elephants have been seen in UK circuses for ten years. The infamous Martin Lacey, owner of the circus (who last year violently attacked a BBC reporter, see CAPS website (1) for a recording), would have us all believe that "animal circuses care more about animal rights than animal rights supporters". In truth, animals held in captivity and made to perform perverse tricks for the Great (or not so great) British public suffer considerably, both mentally and physically. They are transported around the country for months on end, kept chained up in tiny cages (barely large enough for them to turn around) for the time they are not on stage, and are beaten on a regular basis - all in the name of 'entertainment'.

Elephants will travel in herds for up to fourteen miles a day in the wild and live socially complex lives. In the UK, they are thousands of miles away from their ancestors and in a climate that is entirely unsuitable for them. According to a recent Science Magazine article (2), elephants in captivity in Europe may only live half as long as those living in protected areas in Africa and Asia. The life of a lion or tiger held in a British animal circus is a similar story. These animals are reduced to pacing back and forth in one of Martin Lacey's 'beast wagons' for the majority of their lives.

The British government vowed three years ago to take steps to ban the use of wild animals in circuses but has yet to do anything, despite pressure from local authorities, many of which have now banned animal circuses on council land. The DEFRA report that misleadingly concluded that there was no scientific evidence to prove that animals in circuses suffered, conveniently forgot to examine the cruelty involved in the training of these animals. What goes on behind the scenes however is key to what we see on stage - the lion obeys the ringmaster only because the lion has from a young age been made to fear the stick (or the metal rod, or the spiked hook...).

The RSPCA has also been vocal in its criticism of the show, urging members of the public to boycott circuses which exhibit wild animals. Head of the RSPCA’s Wildlife Department, Dr. Rob Atkinson, said: “Asking these majestic animals to behave in unnatural ways in the name of entertainment is a disgrace – a disgrace which is already banned in several European countries.”

Circus animals are not 'ambassadors' for their species. There is nothing useful we can learn from elephants dancing around in costumes. This does not teach us respect for the animals nor does their behaviour in the ring bare any relation to their natural behaviour in the wild. It merely teaches us ignorance and disregard for the welfare of some of the animals now threatened with extinction. This is not because the 'wild' has somehow become a more dangerous place of its own accord, but because human interference, greed, and negligence of essential ife-supporting ecosystems is driving these species to the brink.

A circus simply CANNOT cater for the complex needs of these majestic creatures. Any circus that begs to differ, displays not only arrogance, but ignorance and disrespect of the animals it claims to love.

Shackled, lonely, beaten: that is the reality for animals born into slavery in British circuses.

Their website advertises future venues a few weeks in advance. If the circus is coming anywhere near you please consider organising a protest (or something more creative - e.g. an alternative street circus?...).

http://news.bbc.co.uk/1/hi/england/humber/7944811.stm BBC article offering plenty of space to Great British Circus bullshit
* Mentions on BBC Radio Humberside and an interview which we're not sure if they used
* A brief item on BBC Look North (local television news) last night, which was apparently quite good

GBC seem to have been working on their PR efforts since Martin Lacey somewhat embarrassingly assaulted a reporter last year. Have a listen to the recording:

Action wanted too... so what can we do?

I'm afraid this circus isn't likely to become one of my main points of campaigning any time soon - got to pick my battles with only a limited amount of time for activism, I'm afraid, and all my time is used up.

But what can those of us who would like to demand action over this but can't get actively involved, do? Is there a petition online / somewhere we can write to in order to demand that animal circuses are banned?

I know the Downing Street website e-petitions are a bit crap, but this is one instance where it surely can't be too hard to raise the necessary amount of members of the public to sign it and get something done. (The cruelty is blatantly obvious, most people don't go to animal circuses, and signing an online petition only takes a minute.)

Surely we can cut this circus off from above - using the legal route - and then you wouldn't need to protest outside it any more?

Great demo folks, keep up the good work. Whereever this circus goes we need to hammer them with demo's. It is disgusting that they just got 3 elephants, they also used to have a bear for God's sake! The elephants were stereotypically swaying on recent news programmes. How can anyone pay money to see this misery? Petitions do not get things done, demo's and informing the public are what is needed. The Government should have banned wild animals long ago but, as with all animal issues, they have let us down badly.

Rip down their posters

It would certainly be great to see a change in the law to put an end to wild animals in circuses, and there is a great deal of public support for this (a lot of people assume it's illegal already, which shows the work needed to educate everyone about the problem), but the chance may have passed us by for a while because of the useless DEFRA report of 2007 which failed even to examine the central issue of training and concluded there was no problem to be addressed. The government used this as the basis for dropping plans for a ban, which had been under consideration for a while and championed by the likes of Elliot Morley, who also happens to be Scunthorpe's MP. The time for most effective lobbying has probably passed because of this government cock-up, but that's no reason not to bother of course, since anyone with a brain can see that the whole rotten business is indefensible, politicians hopefully included!

It's worth noting that the GBC has not being doing particularly well on the ticket sales front recently. The opening night in Newark had 30 seats filled in a tent that could accommodate 700, although attendance did pick up. I think the most effective strategy that I'd recommend to anyone is to rip down posters for animal circuses whenever you see them. Most people only get to hear of them through the posters they put up, which appear in a town a few weeks before the circus arrives. The more that get ripped down the less money they'll make. Hit them where it hurts: in the wallet.

Other than that, let's keep turning up outside their gates, talking to people and leafleting to get more and more of the public behind a boycott that will one day lead to a ban.

Anyone know the address of the circus's winter quarters?

Does anyone know the address of the winter quarters used by the circus? I think most circuses have a fixed base where they keep equipment and where they stay during the winter months.