English Nationalists and Fascists to march in Leicester

On March 28th, English Nationalist have called a "National Demo" in Leicester. They hope to use the opportunity express their concerns about the city becoming "the first to have a minority of Indigenous English in the near future." This, they claim "is non other than ethnic clearing." Which is presumably similar to ethnic cleansing.

While the organisers are insistent that the "demo is not connected to any political party," it is prominently promoted on the websites of both the England First Party, a BNP-splinter group, and the openly-fascist National Front. Something which you might hope the organisers would be concerned about. 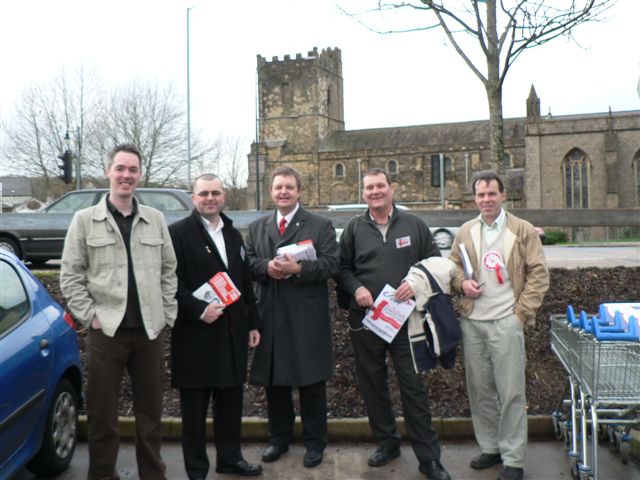 The "We Are The English" demonstration seems to be being organised largely through the internet, with the original national call-out being reposted on various sites. Presumably the reprinters are not all the same person, but the contact details remain the same and point interested parties in the direction of Mr Lee Ingram. A quick trawl of the internet reveals a surprising amount of information on Mr Ingram.

Ingram seems to be something of a petition junkie having initiated petitions about Hastings Day[1], immigration[2] and a proposed statue of Gandhi in Leicester[3]. The latter was part of a wider campaign, apparently initiated by Ingram, which received a fair amount of publicity, reaching far beyond the immediate environs of Leicester[4]. Ingram’s certainly not a stranger to controversy and appears to be the same person as the gentleman who in 2007 complained that he was prevented from taking photos at his child’s nativity performance[5].

Ingram’s politics are difficult to discern from his own incoherent ramblings[6], but it is apparent that he has and presumably is still involved with the English Democrats, a small political party with aspirations of being the English answer to the SNP. His membership seems to be confirmed by the picture of him, with other party activists campaigning in Monmouthshire, found on the English Democrats' website[7] and included above (he is standing second from the left).

Whether Ingram himself is a fascist or just a little Englander is an open question. When contacted about the protest he made much of his attempts to put of the British National Party, but seemed concerned as much with their Britishness as their fascist politics. Indeed he seems to have been silent about the support expressed by BNP splinter group the England First Party who have reprinted the call-out for the demonstration and statinng, “all EFP members and supporters who live in or near to Leicester should make every effort to attend. ” While it is noteworthy that the EFP does not list a Leicester contact, nor any in the East Midlands, but even their rheotrical support ought to be rejected by any decent, right-thinking person.

None of this should be a great surprise. The English Democrats have a less than encouraging history when it comes to the far-right, having flirted with the Third Way (which includes assorted ex-National Fronters and third positionists) and the Freedom Party (another BNP splinter group) and having entered fully-fledged discussions with the England First Party[8].

Fascism breeds when people stand by and let it grow. Doing nothing is bad enough. Marching alongside groups like England First is simply inexcusable.

Notes:
[1] "We the undersigned petition the Prime Minister to Give England, 'Hastings Day' the 14th of October, as a Bank Holiday,"

http://www.englishdemocrats.org.uk/news.php?archive=1176562785&subaction=list-archive&
[8] "The way ahead for the English Democrats,"

what should you do if you kind of think that England is deteriorating due to too much immigration? I don't want to support the BNP or fascist movements but I do want England to return to what it used to be like. I just don't hold this idea that the UK can become a peaceful mutlicultural society, its just falling flat on its face as a non-working idea.

First of all, I disagree with your analysis of immigration as a 'problem'. We could talk all we want about that but there are plenty of good books and resources out there to provide you with non-immigration theories and arguments for why Britain is really in 'decline' (Paul Kingsnorths 'real england' for one). There are also plenty that debate whether 'decline' is even a suitable term.

Secondly if the British government and people are actually concerned about stopping immigration they must look at the root cause- the racist, colonialist, capitalist, supremacist and downright selfish position Britain (its government AND people) has placed itself in in the world. Ok, so the wars in iraq and Afghanistan are two obvious examples, and pretty tired examples they are too. But did you ever consider the fact that Britain was so 'Great' in the first place because we spent 250 years (at least) rampaging round the globe stealing land, resources, and people from the very same places immigration comes from today? We abandoned direct rule of most of our colonies, but not before we imposed culturally alien political systems on to the people who lived under our colonial rule. 'Take the money and run' was our motto in international policy from world war two onwards.

We've hoarded not just wealth but the basic resources people need to live by in the hands of a few, behind an iron curtain of immigration officials, detention centres, and unified european police forces. Not to mention a bristling arsenal of weaponry.

Say what you like about these 'England First' lot, but at leas theyre honest about one thing- that any policy that seeks to stop immigrants getting in to Britain at the border is an inherently fascist policy.

Everything is in a constant state of change and hampering after a past viewed from the present by those who are too young to have experienced it themselves (i.e. often a past several generations ago), is a little problematic. We have no choice but to accept the obvious demographic changes that will come about over the next 50 years.

Whilst indeed this will mean there will be yet more areas where 'whites' (what ever that means i.e. 'whites' are an extremely diverse bunch) will become a minority, the only thing to fear here is the danger of racism against white minority communities and everything that follows from this.

For example, as a white middle class male who lived in a 'non-white' area, I often had difficulties getting work locally and was often told I would not get anywhere as I was white. Another example would be sitting on buses and listening to often 20 something yr old males (and younger) make racist jokes in Urdu (yeah I know a little Urdu) about myself and my partner who is also male...yeah you guessed it, cue the homophobia as well...but hey I get this across the cultural board :P.

So how to combat this? Well, the answer is not to be racist and prejudice oneself and accept the changes that will occur. This means not pandering to the likes of the BNP and the groups organizing this event. We on the left need to recolonize these arguments and finally acknowledge and engage with the obvious racism that swings both ways. Until this is done we will be unable to have harmonious communities (well that ideal never really exists but we can travel towards it) and will find the fascists gaining further political support.

Time for pargmatism over dogma

I propose setting up a fund to give every member of the BNP and others who need a sense of 'nationalism', £600 to fuck off and create their own mini state somewhere else.

I dont know. The BNP-C18 are sad nazi nutters, fashionable with some of the pissed off.
Has anyone been to cornwall or the highlands etc, its mostly empty or sheep& cow farts, sadly some enviromentalists too would rather have sheep & cow farts it seems than people living on the land our ancestors used to farm.
Yes we need our land & planet in the hands of the people.
Most people living in Ghettos or cities would love to live in twee little villages like many BNP senior members & funders who no doubt are related to the bailiffs who helped throw our ancestors into the poor houses.
"Anyway yeh bloody romans,normans,gysies,poles, asians", bla,bla,bla, your full of it Nazi boys & Girls.
We are one race & that is all!!
we have different ethnicities that protecting, now shut up & or get back on the sedatives, there are millions in UK alone getting vfed up with your sick twisted bile

sorry about spelling mistakes, we dont get as much funding from

mostly twisted ex tory sugar daddies like the BNP do& most true anarchists have full time jobs, though we stop people being forced into shit meaningless jobs like the BNP, bless em. Theres nowt really british about the "b"np, their just extremely bitter sado's