Climate Camp hits the City of London on April Fools Day, the eve of the G20 leaders' London Summit. G20 Meltdown also plan to hit with 'The Four Horsemen of the Apocalypse' Join us! 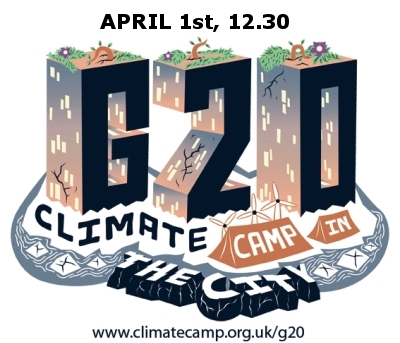 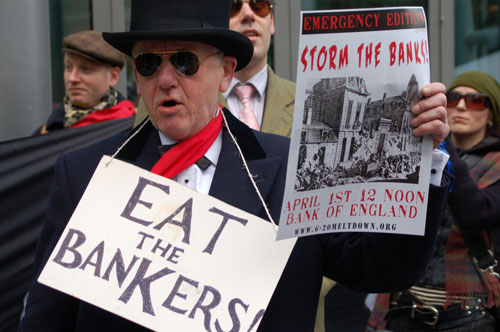 First the city traders speculated with our homes, jobs and money – with disastrous results. Now they are speculating with our climate and the very future of life on earth – and once again our governments are cheering them on.

By creating a brain-bending system of carbon pollution licenses, fossil fuel companies and trading firms have found a way to keep on churning out global warming gases and to reap huge windfall profits at the same time. Meanwhile, the UK government is justifying a third runway at Heathrow and a coal-fired power station at Kingsnorth by saying that these new “carbon trading” schemes will magically make all their emissions vanish.

They are handing control of our climate over to the same people and systems that caused the financial collapse. All the workable and fair alternatives aren't getting a look-in.

We need to stop this foolishness.

CLIMATE CAMP...
We've camped against the Heathrow runway, we've camped against the Kingsnorth coal power station. Now its time to camp against the over-arching problem: absolute faith in unfettered markets and endless economic growth. On April 1st the G20 leaders arrive in London. At a time of climate crisis their response to the market meltdown is emergency loans to car manufacturers, increased spending to encourage consumption, and bailouts for the very people who got us into this mess - just the thing that will make the climate crisis worse.

Don’t let them get away with it: join our camp in the Square Mile!

We will convergence on the European Climate Exchange, Hasilwood House, 62 Bishopsgate, EC2N 4AW at 12:30 exactly. If we are to be succesful, it is very important that we all arrive at the Climate Exchange at the same time. We must swoop in from different directions, and under different means to all arrive within a minute or two of each other. We therefore advise that people meet up with their mates early, and somewhere within easy reach of the Climate Exchange. Then, at the appropriate moment, leave quickly, and timed to arrive at exactly 12:30. You may even want to practice beforehand.

Things may change on the day, perhaps significantly. There is a text message news service which will be available during and in advance of the G20 Leaders meeting. We strongly recommend that people subscribe to
it. It is possible, even likely, that the place that we finally set up camp will not be the Climate Exchange.

Don't let the financial and fossil fools make the rules!

For updates, details on back-up plans, and more information, visit us at

Email g20 [@] climatecamp.org.uk for more information.
In the meantime, we all need to get the word out.

If you would like to be in touch with others from the Nottingham area going down contact:

http://www.facebook.com/event.php?eid=49600653225
* Download the postcard version for photocopying and get it out:

Please post this link, paste this text, and otherwise spread the word!

and the MELTDOWN.....
The Four Horsemen of the Apocalypse will lead themed processions starting at 11 a.m. 1st April from the following rail stations:

At 12 noon, April 1st, we're going to reclaim the City, thrusting into the very belly of the beast: the Bank of England.

Early a.m. April 2nd, we're going to bang on their hotel doors, @ the Excel Centre, Canning town to deliver our message of a world beyond capitalism.

Take on the capitalists whilst we still have time!

Iam not sure about eating bankers, they are abit on lean side, but some people

might really be forced to consider it if we dont get enough resources & funds into proper organic sustainable cooperative farming advocated in the style shown by bbc farming programmes recently.
Investing in tech that cant be used safely is fools gold when, when we already have more than all the tech we need.

Been let down at the last minute with transport to London for the 1st(tomorrow). Anyone here know of any coach transport, pick-up point, time etc?