Save Victoria Baths Campaign, Still need to be active

On saturday 21 March, members of the Save Victoria Baths Campaign were out in the Market Square collecting signatures on their petition to the council. 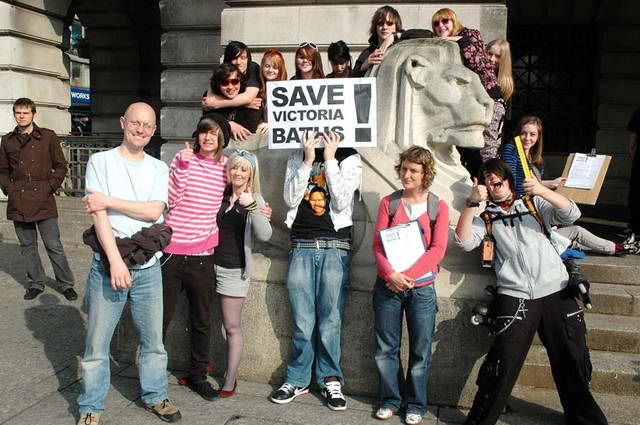 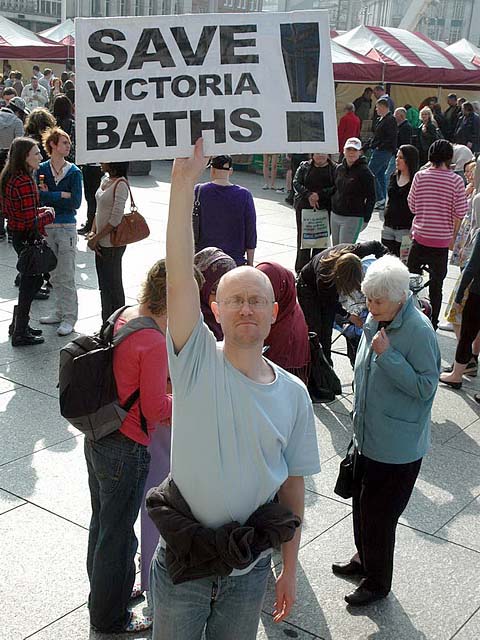 On saturday 21 March, members of the Save Victoria Baths Campaign were out in the Market Square collecting signatures on their petition to the council.

They say it is getting towards crunch time - Tuesday 7th April 2009 - when Nottingham City Council's Executive Board will vote on which of the three design options for the new Victoria Leisure Centre they'll develop.

They fear that the Council are firmly behind Option C which offers the least amount of facilities and will see virtually all of the building destroyed! The campaign is urgently asking people to write to or visit their councillors to ask them to support Option A, which offers the most facilities for the cheapest cost and is the most environmentally friendly of the three designs.

The options all include new buildings on the current site of the leisure centre with the historic clock tower retained. However, they all propose a smaller facility with no sports hall. The land freed up would be used for residential development in two of the designs and has an unspecified use in a third.

Mat Anderson, campaign group chairman, said he suspected the designs proposed were drawn up to increase the opportunity for developers.

He said: "It is all so pointless. The council has gone it in their heads to use this as a way of levering in regeneration. The community is just interested in the leisure centre. It is disingenuous for the council to hijack community preference for its own aims."

SAVE VICTORIA BATHS CAMPAIGN'S AIMS ARE:

* To preserve as much as possible of the original building and functions, especially the important historical elements of the existing building and respectfully incorporate these into any new facilities
* Provide a minimal gap in leisure provision for the east of the city while the new facilities are built
* Ensure that this investment provides a high quality, long-term and sustainable solution with the potential to service the east of the city for another 100 years to come

Our position is based on an extensive survey of local people conducted in May - November 2008 to find out exactly what facilities they would like to see in the new leisure centre and what parts of the existing building they would like to see retained. 646 people completed the survey, which was launched at the Free Fun Day at Victoria Leisure Centre and Sneinton Market on Saturday 31 May 2008. Our position is also based on the Nottingham City Council's own Tell Us Your Views survey.

Council Under Fire From Campaign To Save Leisure Centre {Feature]

It’s getting close to crunch time for the Victoria Leisure Centre. On April 7th, the Area 6 Council Committee will decide how the leisure centre is going to be redeveloped. There is every indication that the Council will vote for the building to be knocked down (apart from the clock tower), and to replace what is there with one pool, a small teaching pool, a gym and a sauna (Option C).

Please act now to prevent this.

For slightly less money, they can afford to bring what is already there up to 21st century standards. This would keep both pools, the Turkish, sauna, gym and hopefully the sports hall (Option A). This is not only the most cost-effective option, it is the most environmentally friendly one too – it is far more environmentally friendly to preserve and refurbish what is already there than to knock it down and replace it (this is to do with embedded carbon – visit our website for more info about this).

IF YOU HAVEN'T ALREADY DONE SO, PLEASE CONTACT THE COUNCILLORS. They are claiming they have public support to proceed with demolition and rebuild. Prove them wrong!

http://www.savevictoriabaths.org.uk/about.html to sign an online petition and get details of where to visit the Councillors at their surgeries. Jon Collins, Dave Liversidge and Sue Johnson have one on Wednesday April 1st at 6pm St Anns library. David Mellen and Ghul Khan have one on Saturday 28th March at Sneinton library at 11am - 12pm. At our website, you can also access some key facts about the development which you can use to question the Councillors. If you can't visit please email them with your views.

Sad to say, the Council are relying on people doing nothing so that they can get their way. Please do not let them. Without your help the leisure centre will be lost forever.

PRESS RELEASE TO ALL NEWS EDITORS

Save Victoria Baths campaign group will be collecting signatures outside the Victoria Leisure Centre this Saturday 28th March for a petition asking the Council to support the preservation and refurbishment of the Leisure Centre (Option A of the 3 designs put forward by architects Levitate).

The campaign supports Option A because it is the most popular - in the only publicly available figures for detailed surveys, 80% of the thousands surveyed wished to keep the existing facilities (Tell Us Your Views Feb- March 08). It is the cheapest of all 3 options and it retains the most facilities – both pools, the sauna and historic Turkish Baths, the gym and hopefully the Sports Hall as well.

Option A is also the most environmentally friendly of all the designs. The current building has many hundreds of tons of carbon embedded within it, all of which would be released into the environment upon demolition. This will far outstrip any savings made through potential energy efficiency in a new build. MP Alan Simpson has supported the campaign on this:

“Option A is the most consistent with the Council’s own carbon reduction commitments. I think there is much to find in the restoration of what we have now rather than its replacement.”

The restoration of this treasured local facility will also improve on its growing popularity:

“The Victoria Leisure Centre is more popular than ever, with the high profile the closure campaign has given it and with the impact of the free swimming initiative. Sensitive programming and pricing will continue to draw in and retain new users, and the Council’s own figures show that it is cheaper to run (on a per visit basis) than Southglade, Beechdale, Noel Street, Portland and John Carroll.”

The Council are supporting the demolition of most of the building and the development of a completely new facility and claim they have the backing of the public – but they have so far declined all invitations to release any results to back their case despite 3 months of consultation since January 09 on the merits of the new designs.

For more detailed info on the points raised above, please contact Mat Anderson 07919 035671