Speech in Oberndorf [with and German translation] - mp3 8.5M 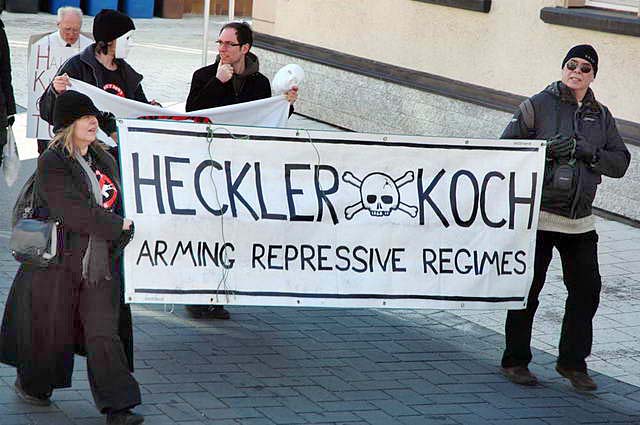 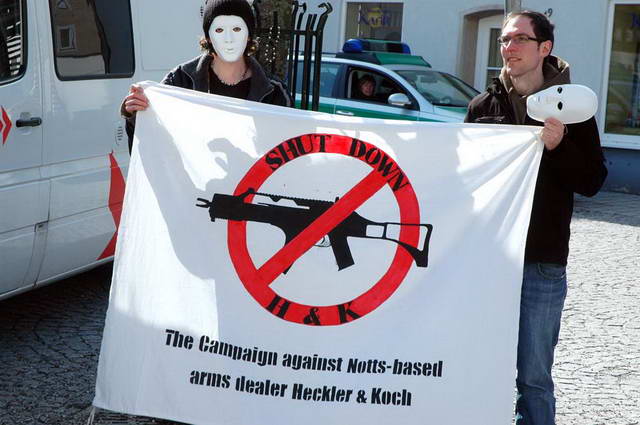 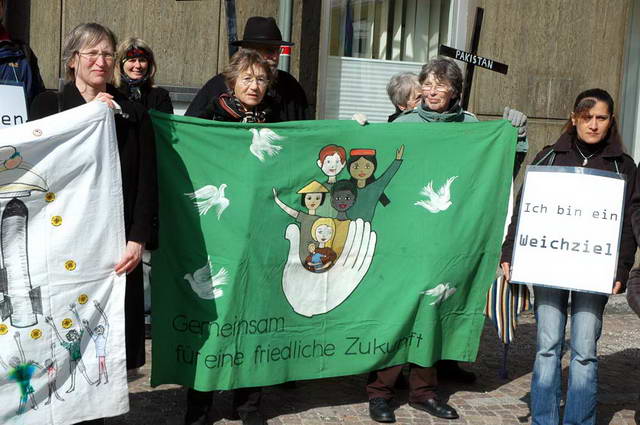 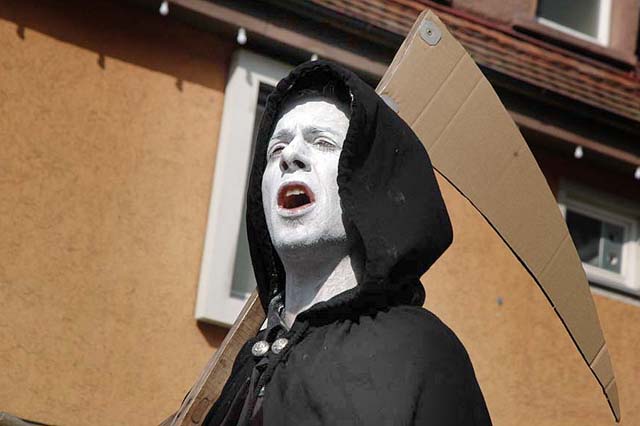 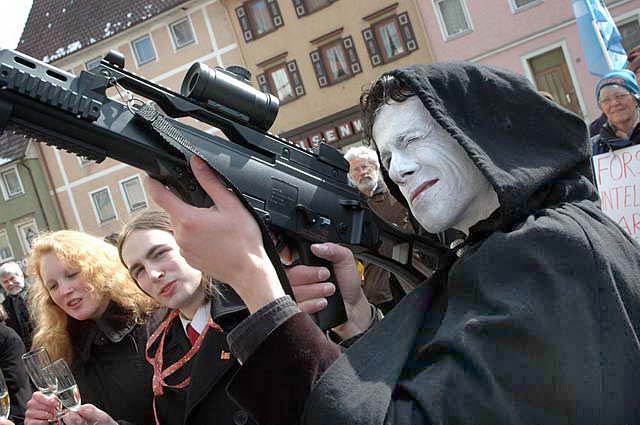 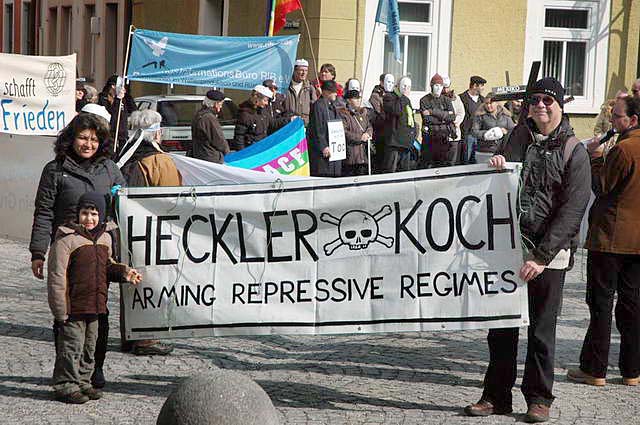 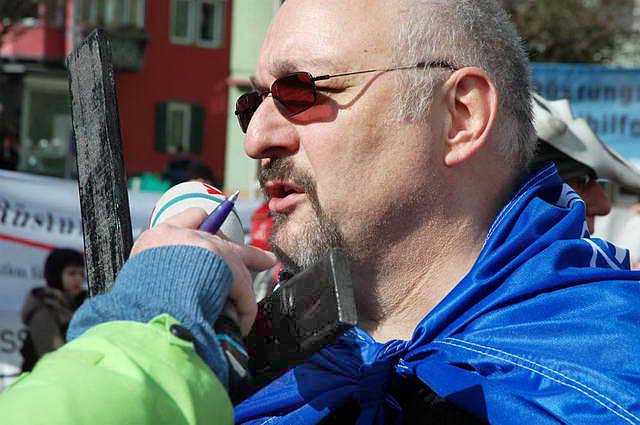 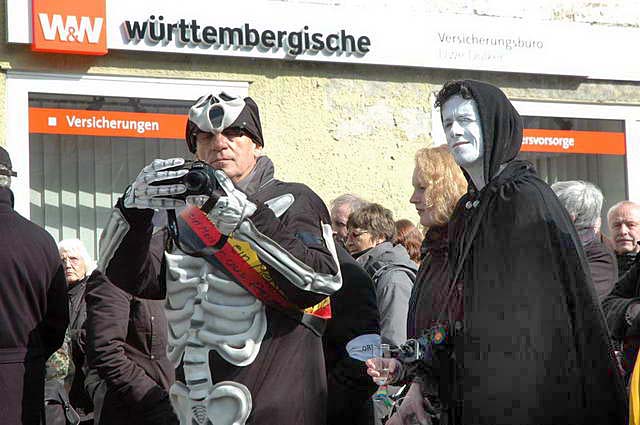 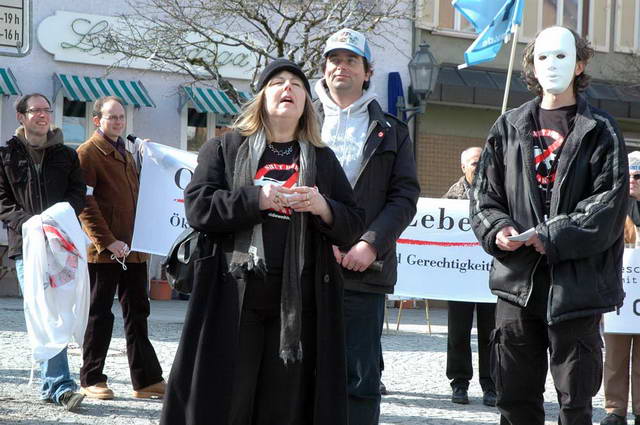 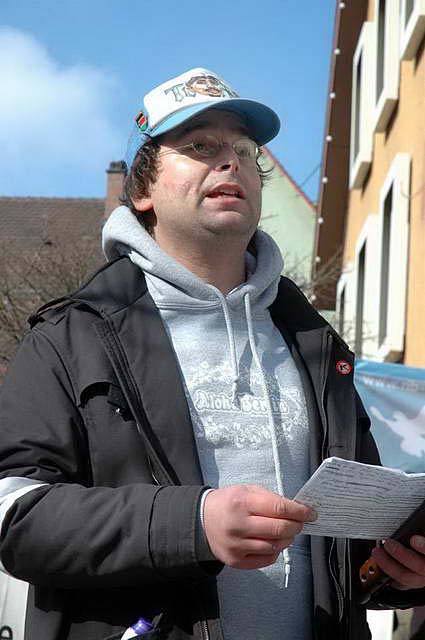 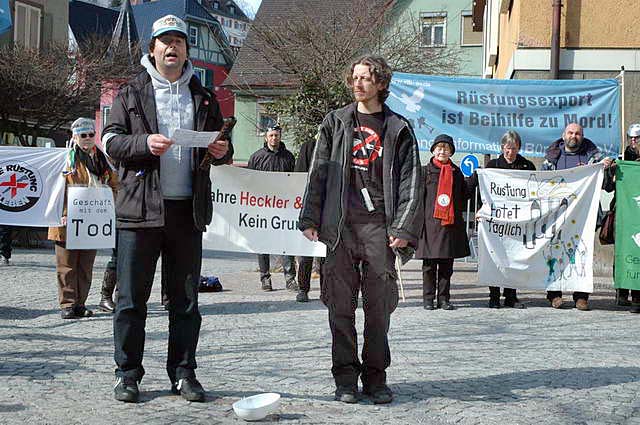 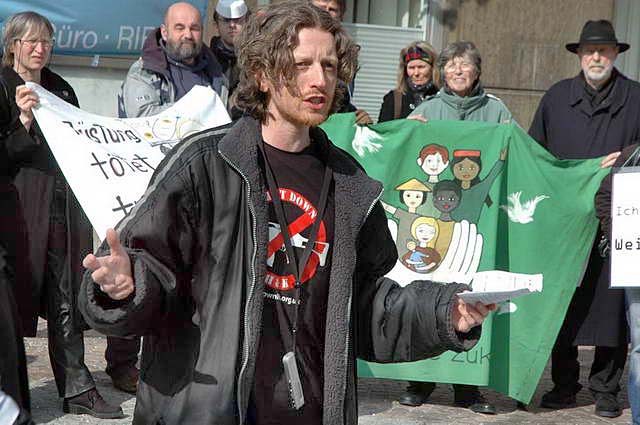 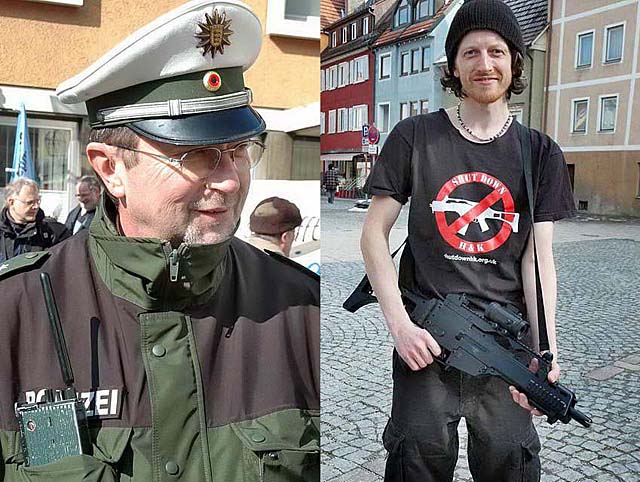 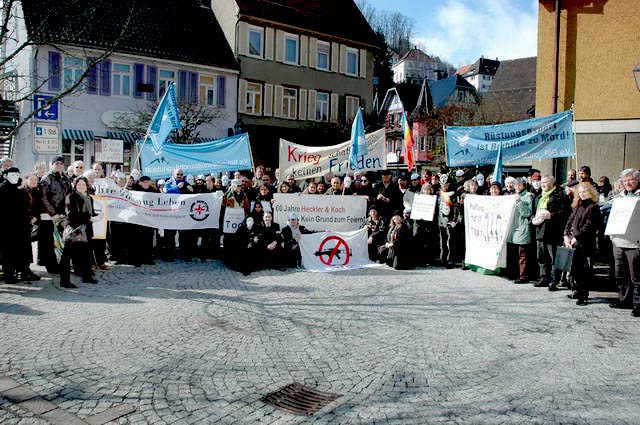 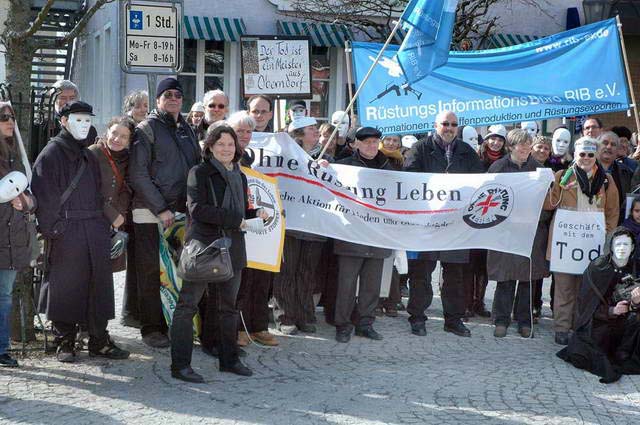 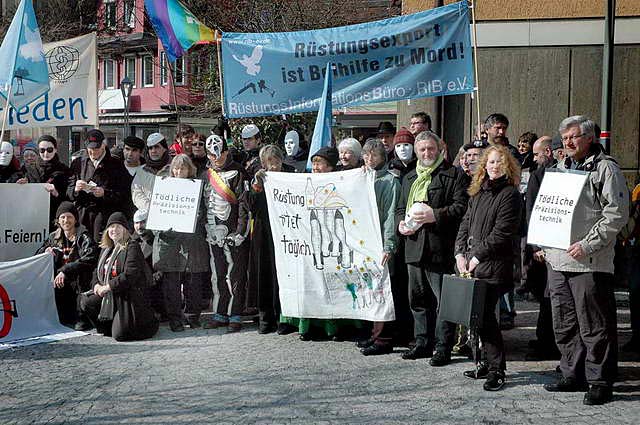 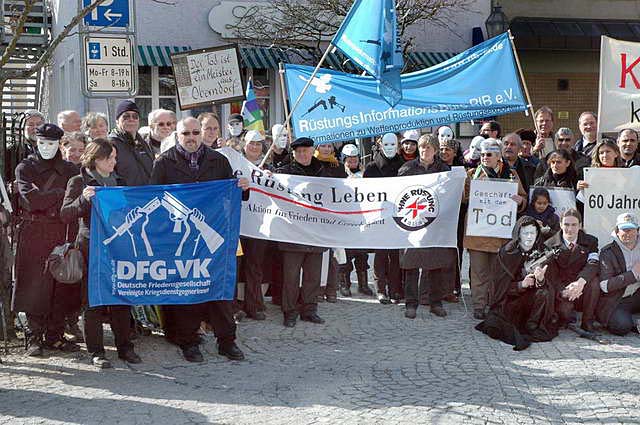 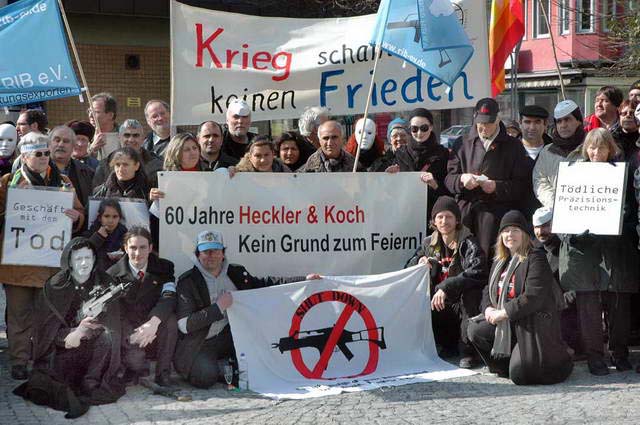 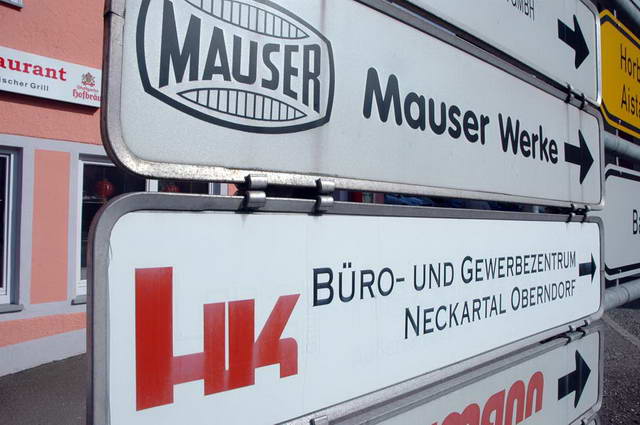 Invited by the German anti-militarist and their campaign against the activities of Heckler & Koch at their 60th anniversary, we were made to feel most welcome.

Those of us who traveled from Nottingham, and are used to getting almost no coverage from the media for our protests against murderers Heckler & Koch, were amazed and delighted at the huge coverage there was in Germany. All the media were represented, and even quite conservative papers gave acceptable write-ups. I will attempt to attach an example.

The DAKS-Kleinwaffen Newsletter (Information of the German Action Net to Stop Small Arms) held an interview with one of us, which is copied below in English. Hopefully the whole Newsletter (in German) will be attached too.

1.) „Nottingham against Militarism and the Arms Trade” or „Notts Anti-Militarism” is a activist-network in the region of Notthingam? – Who are you? And what are you doing?

We are an independent group of people from the Nottingham area who want to act together to oppose militarism and the arms trade. We come from many different backgrounds and ages, and have a number of university students with us, although it is many, many years since I was one of those!

There is no formal membership structure, but I would guess we have about 10-15 regular activists, and many more who will turn up to special occasions.

We are currently focusing attention on campaigning against Heckler and Koch, because they have premises in Nottingham, and we want arms dealers out of our city. We hold monthly protests near H&K’s gates, and a monthly educational presence in the city centre, where we try to inform the local population about H&K. Other activities include letter-writing and making links where we can.

Nottingham has a well-known problem with gun crime. It is particularly inappropriate therefore to have a gun factory sited here, and this is one angle we focus on too.

Another thing we are doing is traveling to Germany to protest with you!


2.) Heckler & Koch is a well-known producer of small arms and light weapons from Germany. Lesser known is the presence of Heckler & Koch in the USA and even less-known is the existence of a subsidiary in the UK. - What kind of adventure is situated in Nottingham?

The Nottingham operation is responsible for sales to the British home markets. It is also responsible for international (non-NATO) sales and services of small arms - Asia, Africa, and South & Central America. These customers may include the armed forces of Thailand, Nepal, Mexico, Georgia, Philippines and Indonesia, all of which use modern H&K weapons, and all of which are accused by Amnesty International of human rights abuses.

The Nottingham premises are on a privately-owned industrial estate, with no signs up saying who they are. We think that guns are at least stored there, and maybe assembled there too. H&K are very sensitive about their secrecy – every time we come to protest non-violently, we get many police for each protester. We also know that H&K have contacted the police, who have told the local radio, TV and newspapers not to report our protests.


3.) Except of Heckler & Koch - is the arms industry in Nottingham a relevant economic factor?

Nottingham was a manufacturing city, and arms have featured in the past.

In particular, there was the Royal Ordnance (gun) factory, which had been a large local employer. It was built 1915-16 and bought by the Government in 1936, to continue heavy gun production. After 1945, the factory engaged in civil work until the government wanted arms again. In 1985 the Government privatised the Royal Ordnance Factories, which were sold to British Aerospace in 1987. British Aerospace purchased British Manufacture & Research Company, and moved the ammunition and medium calibre manufacturing to the Nottingham site. In 1999, British Aerospace and the GEC Marconi Land and Naval Systems merged to form BAE Systems. The Royal Ordnance Factory Nottingham stopped working in 2001, and functions transferred to BAE Systems sites elsewhere.

In a massive ammunition factory on the other side of Nottingham, (Chilwell), 134 workers were killed in 1918 in an accidental explosion. That factory has been shut for many years.

In modern times, we are very near to Rolls Royce, who have factories in Hucknall and Derby. In Hucknall, they produce components of the engine that powers the Eurofighter Typhoon combat aircraft; while Derby is their international headquarters and the site of two nuclear facilities.

So yes, the local area has a long association with killing machines. That said, very few Nottingham residents are aware of H&K’s presence, and we intend to inform them.

Manufacturing generally is now not a large player in the Nottingham economy.


4.) And what is about future? For the parent enterprise in Oberndorf a regional conversion concept was developed – but never implemented - in early 1990th. What’s about Nottingham? Could you imagine an analogous concept to be successful?

We need renewable energy, and the size of the Nottingham H&K premises would be ideal for a solar panel or wind turbine plant. Nottingham once produced bicycles; it would be good if it could do so again. We don’t know how many people work at H&K Nottingham, or what their skills are, but conversion would of course be a dream. But we would have a very, very long way to go before it was a possibility.

Meanwhile, we are making them uncomfortable in what they are doing, and showing them they are not welcome in Nottingham. We will have to see what the future brings, but we are not going away!